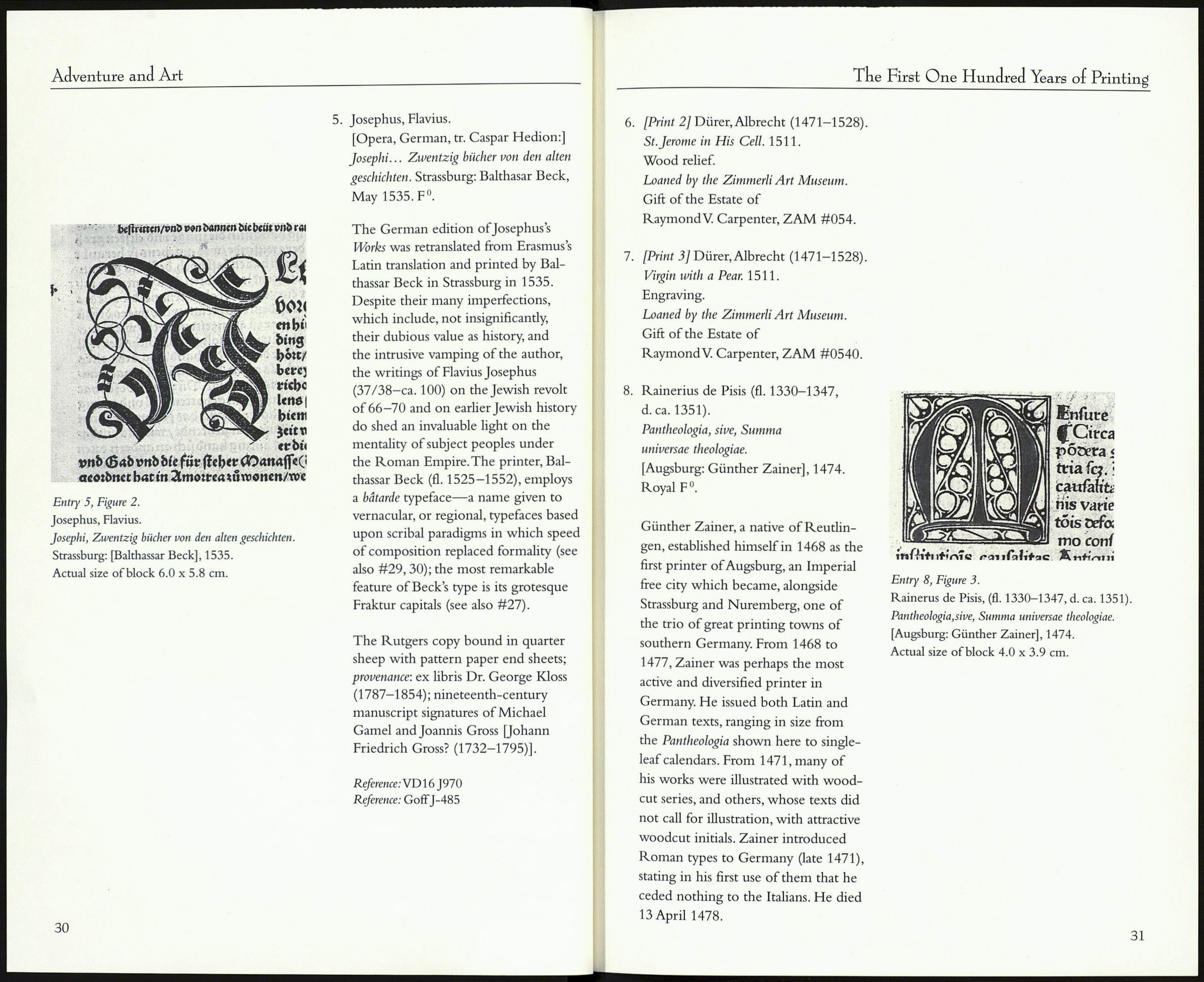 Cologne and its region: St. Augustine, St. John
Chrysostom, and, most heavilyjean Gerson, chancel¬
lor of the University of Paris, the noted spiritual
author and conciliarist reformer.

The Rutgers copy, formerly owned by the noted col¬
lector of incunabula George Dunn, was presented to
the Library by the prominent New York bookdealer
John F. Fleming.

Peter Drach, scion of a patrician family of Speyer,
established a printing shop there about 1475, and
continued printing and publishing into the early six¬
teenth century. In the 1480s and 1490s he was one of
the most active and enterprising of German printer-
publishers, second to Koberger in Nuremberg, but to
few or no others. His edition of the Ruralia commoda
of Crescentiis (Piero de' Crescenzi) was his most
ambitious illustrated edition, for which he commis¬
sioned nearly 290 column-width woodcuts, using
them both in this Latin edition, and in German-
language editions of 1 October 1493 and of ca. 1495.
Drach's editions of Crescentiis were the most heavily
illustrated of those printed in the fifteenth century.
The woodcuts of agriculture occupations and of hunt
ing are derived from the manuscript tradition of the
Ruralia commoda. The numerous woodcuts of plants
and herbs are copied from illustrations of the Hortus
sanitatis, a massive herbal published in Mainz by Jacob
Meydenbach,23June 1491 (GoffH-486).

The Liber cronicarum or Nuremberg Chronicle, as it
is commonly called, was first printed in Nuremberg
by Anton Koberger in 1493, in both Latin and Ger¬
man editions. It was compiled from a wide variety of
sources by Hartmann Schedel, a wealthy and scholarly
Nuremberg physician, and was provided with an
extraordinary range of woodcut illustration, ranging
from double-page city views to small vignettes and
decorative linking blocks.The illustrations were com¬
missioned from the workshop of the Nuremberg
artists Michael Wolgemut and Hans Pleydenwurff, the
shop where Albrecht Dürer had shortly before served
an apprenticeship. Koberger's two editions, printed on
the largest (Imperial) paper, are, in terms of their com¬
plicated intermingling of typographic text and wood¬
cuts, the most complex examples of printing in the
fifteenth century. Copies were distributed to many
cities in Europe, including to Italy and Spain; cus¬
tomers could acquire them either hand-colored or,
more cheaply, uncolored. But even uncolored, it was
a very expensive book.

The prolific Augsburg printer Johann Schönsperger
saw that there could be a market for a less-expensive
version of the Nuremberg Chronicle. Probably with¬
out Koberger's permission, he reprinted the Nurem¬
berg Chronicle on ordinary-size (Chancery) paper,
with woodcuts copied from those of the Nuremberg
editions. The number of woodcuts was considerably
reduced, but all the same they would have represented
a considerable cost for Schönsperger. He printed
editions both in German (18 September 1496) and, as
here, in Latin (1497).The German edition certainly
sold out, for he reprinted it a second time in 1500.

The Rutgers copy came as the gift of the eminent
geologistjohn Conover Smock (1842-1926).