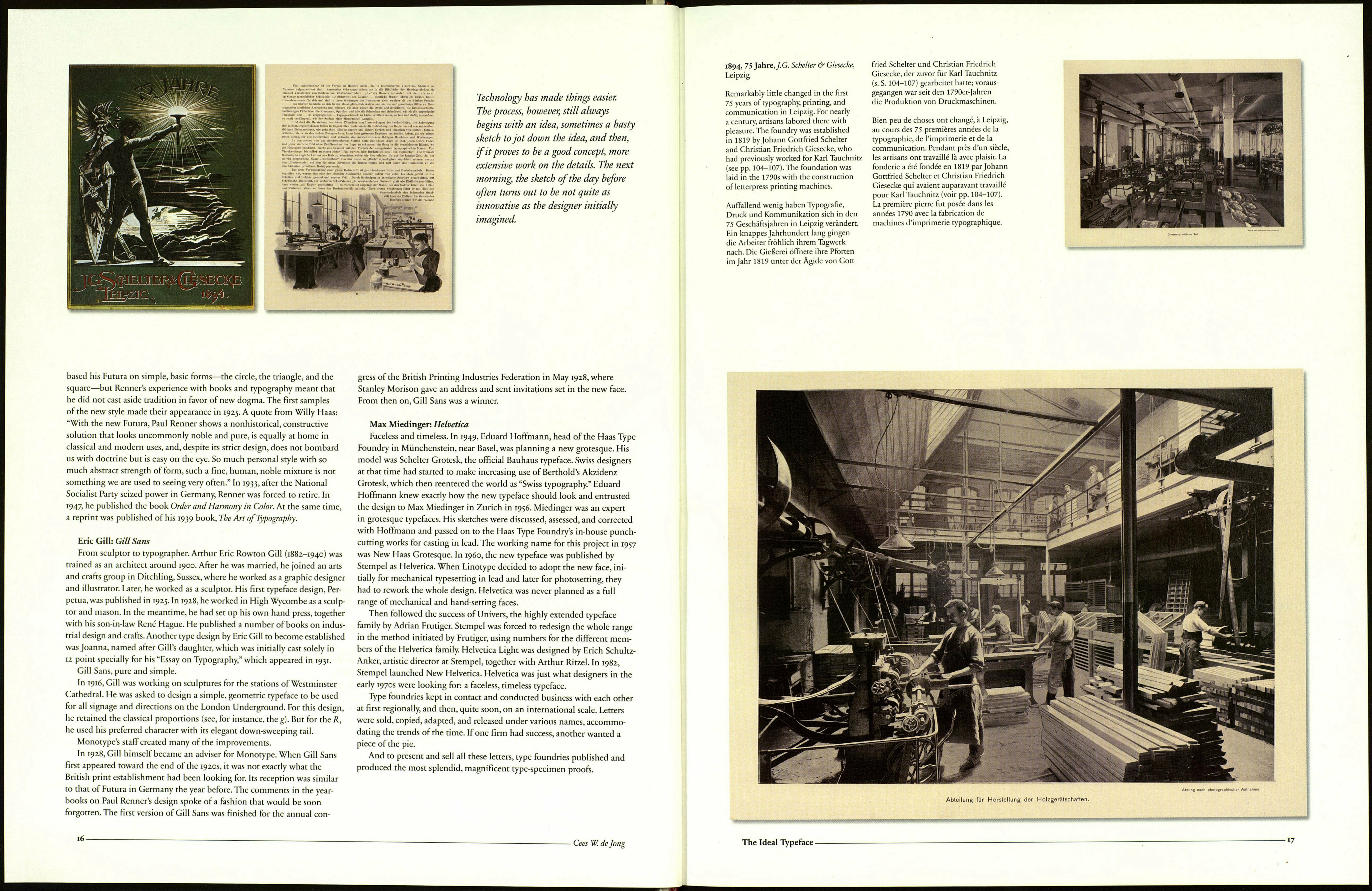 THE CASLON OLD FACE SERIES IS THE FRUIT OF HA

THE CASLON OLD FACE SERIES IS THE FRUIT OF MAKV

THE CASLON OLD FACE SERIES IS THE FRUIT OF MANY YEARS'
study of the Caslon types and of their use by those great printers who did then-
most distinguished and useful work with them in their purity. It was с 123+

THE CASLON OLD FACE SERIES IS THE FRUIT OF

THE CASLON OLD FACE SERIES IS THE FR

THE CASLON OLD FACE SERIES IS THE FR

' I *HB i'"""'«! U thu left m type eiste r>. At the extreme right {4) is a rubber, and beyond) him, seated,
1 is a dreier. The boys (1) at the renier table arc breaking off the jets of type metal. The devices on
either side of the table are 11 mart literal reproduction» of two illustrations of a mold in Moxon's "Mechanic!.
Exercises," published in ilsJij, and for many years thereafter a standard manual on typefounding. As intro¬
duced into this print, they are probably ten limes larger than their normal »¡7*. On ihe left (5) is the Imver
half of a mold, which almost duplicates ihc upper half (6). The reference letters identify the pans which

Devoted to the Linotype and its use

what is probably the most famous type family in the
history of letter founding. The first font, the pica, was
cut a little more than two centuries ago, in 1722, and the
Aïïe-SSWÏÏK remaining fonts were completed between that time and
173+, the year in which Caslon issued his famous broadside specimen sheet,
reproduced in facsimile in our supplement. The types won an immediate suc¬
cess, and although at one time threatened with extinction, due to the changes
in taste which followed the introduction of the "modern" letter, they were
revived in 1844 and are today in universal use throughout the English-speak¬
ing world. The name Gislon Old Face was given them at the time of their re¬
vival to distinguish them from later types cut by the Gislon foundry, and is the
name used in England today to designate the original Gislon type.

In America, "Primers and books, newspapers and broadsides, were mostly
printed in Caslon old style types in the mid-Eighteenth Century and up to the
Revolution. Indeed, the Declaration of Independence itself was printed in
[■87]

of his life's work, published posthumously in 1818 in Parma by his widow,
Margherita Bodoni. The first copy was dedicated to Her Royal Highness
Marie-Louise, Princess of Parma. This handbook on the art of book printing
consisted of 546 printed pages with a total of 665 different alphabets, includ¬
ing 100 exotic typefaces and 1,300 vignettes. It contained 170 Latin scripts;
some used up to 380 matrices. The edition comprised no more than 150
copies, although the figure of 290 has been quoted.

According to his widow, in 50 years Bodoni made, corrected, and cast
over 55,000 matrices. Bodoni was devoted to design, to page harmony in
terms of choice and size of typeface, leading, interplay of line length, spac¬
ing, and column width. The interaction of black and white and the gener¬
ous use of space played a major role. The history of Bodoni's emulators is
long. Morris Fuller Benton designed a Bodoni face for ATF in 1911. Mono¬
type followed suit, then the Haas Type Foundry in Switzerland in 1924.
The Haas Bodoni was copied by the Amsterdam Type Foundry, Berthold,
and Stempel. Linotype and Ludlow also followed Haas, while Johannes
Wagner introduced a new Bodoni in 1961. There are more than 500 Bodonis
in the world. A beautiful example is Zuzana Licko's Filosofia (1996).

The search for the best newspaper typeface. In 1923, Stanley Ignatius
Arthur Morison (1889-1967) became typographical adviser to Monotype.
He was in charge of designing a number of typeface families based on his¬
torical fonts, such as those by Eric Gill. The manager of the London Times,
William Lints-Smith, had heard that Morison had made scathing remarks
about the paper's outdated typography. They met and, after a long discus¬
sion, Morison's advice was to redesign the Times and he became a typo¬
graphical adviser for the newspaper. He made test pages in different type¬
faces, including Baskerville, Plantin, Imprint, Ionic, and a version of
Perpetua. At the same time, in the United States, Linotype was producing
typefaces for setting long texts. The first was Ionic, followed in 1931 by
Excelsior, which is still one of the most popular newspaper typefaces today.

After several other presentations, Morison decided that what the Times
needed was a completely new typeface. In 1931, he presented two designs,
an overhauled Perpetua and a modernized Plantin. The committee ol the
Times decided on the second of these. The original face being named
Times Old Roman, this new typeface was christened Times New Roman.
The face made its first appearance in the edition of the Times published

on October 3,1932. Still a standard typeface today, thanks to wide distri¬
bution and marketing, Times New Roman will survive.

Very simple and highly typical. AG, as connoisseurs like to call this
typeface, was already more than 20 years old at the heyday of Construc¬
tivism. De Stijl, Bauhaus, Dada, and others used AG to great effect. It
was in fashion at the birth of Swiss typography, as its major typeface. AG
still has a high visual quality, reminding us that type does not have to be
uniform to be legible and attractive; on the contrary, it is the difference
between characters that makes them readable. Two companies presented
Akzidenz Grotesk in January 1899 in advertisements in the Deutscher Buch-
und Steindrucker. One was Berthold, the other Bauer & Co. of Stuttgart.

In 1973, Günter Gerhard Lange, redesigner of Akzidenz Grotesk and
type director at Berthold, described his new version of the typeface at
its introduction as follows: "In this work, the basic proportions of the well-
loved Akzidenz-Grotesk semi-bold were used to determine the average
length and individual shapes. Naturally, the family similarities between the
individual styles had to be taken into account, as did the mood and fashion
of the times." The fashion was then Max Miedinger's brand-new Helvetica
and other competing new faces, such as Adrian Frutiger's Univers and
Konrad F. Bauer's Folio. Nevertheless, good old AG still plays a major role
in the ever-changing world of printing and design.

Though being a typeface of its time, Futura is an ageless, elementary
typeface. In 1925,Jan (Ivan) Tschichold published a special edition of
Typographische Mitteilungen entitled "Elementary Typography," in which
he wrote, "Of the typefaces available, the grotesque or block faces'fulfilled
the needs of the new typography best, as they were simple in design and
easy to read. There was no reason, however, why other easy-to-read type¬
faces should not be used. The right typeface did not yet exist."

Bauhaus leader László Moholy-Nagy wrote in liauhausheft 7 in 1926,
"Since all existing grotesque book styles lack basic style, grotesque still has
to be created." Herbert Bayer's "Attempt at a New Typeface" and Josef
Albers's "Stencil Type as Hoarding Type" were published in the same issue.

At the same time, Paul Renner's design for a new grotesque style based
on Constructivist principles was coming along. Designed in 1924, Renner