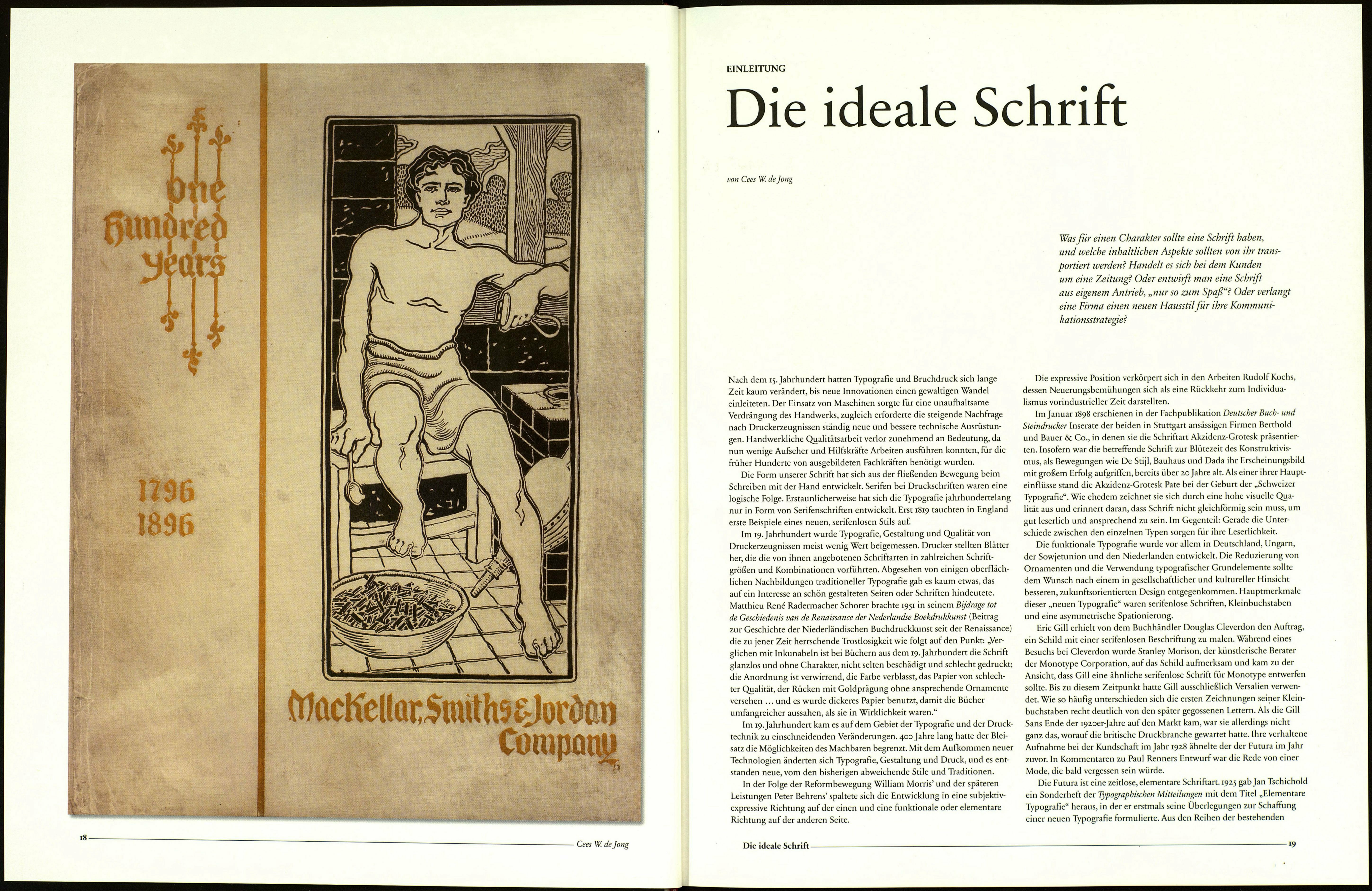 Technology has made things easier.
The process, however, still always
begins with an idea, sometimes a hasty
sketch to jot down the idea, and then,
if it proves to be a good concept, more
extensive work on the details. The next
morning the sketch of the day before
often turns out to be not quite as
innovative as the designer initially
imagined.

based his Futura on simple, basic forms—the circle, the triangle, and the
square—but Renner's experience with books and typography meant that
he did not cast aside tradition in favor of new dogma. The first samples
of the new style made their appearance in 1925. A quote from Willy Haas:
"With the new Futura, Paul Renner shows a nonhistorical, constructive
solution that looks uncommonly noble and pure, is equally at home in
classical and modern uses, and, despite its strict design, does not bombard
us with doctrine but is easy on the eye. So much personal style with so
much abstract strength of form, such a fine, human, noble mixture is not
something we are used to seeing very often." In 1933, after the National
Socialist Party seized power in Germany, Renner was forced to retire. In
1947, he published the book Order and Harmony in Color. At the same time,
a reprint was published of his 1939 book, The Art of Typography.

From sculptor to typographer. Arthur Eric Rowton Gill (1882-1940) was
trained as an architect around 1900. After he was married, he joined an arts
and crafts group in Ditchling, Sussex, where he worked as a graphic designer
and illustrator. Later, he worked as a sculptor. His first typeface design, Per¬
petua, was published in 1925. In 1928, he worked in High Wycombe as a sculp¬
tor and mason. In the meantime, he had set up his own hand press, together
with his son-in-law René Hague. He published a number of books on indus¬
trial design and crafts. Another type design by Eric Gill to become established
was Joanna, named after Gill's daughter, which was initially cast solely in
12 point specially for his "Essay on Typography," which appeared in 1931.

In 1916, Gill was working on sculptures for the stations of Westminster
Cathedral. He was asked to design a simple, geometric typeface to be used
for all signage and directions on the London Underground. For this design,
he retained the classical proportions (see, for instance, the g). But for the R,
he used his preferred character with its elegant down-sweeping tail.

Monotype's staff created many of the improvements.

In 1928, Gill himself became an adviser for Monotype. When Gill Sans
first appeared toward the end of the 1920s, it was not exactly what the
British print establishment had been looking for. Its reception was similar
to that of Futura in Germany the year before. The comments in the year¬
books on Paul Renner's design spoke of a fashion that would be soon
forgotten. The first version of Gill Sans was finished for the annual con¬

gress of the British Printing Industries Federation in May 1928, where
Stanley Morison gave an address and sent invitations set in the new face.
From then on, Gill Sans was a winner.

Faceless and timeless. In 1949, Eduard Hoffmann, head of the Haas Type
Foundry in Münchenstein, near Basel, was planning a new grotesque. His
model was Schelter Grotesk, the official Bauhaus typeface. Swiss designers
at that time had started to make increasing use of Berthold's Akzidenz
Grotesk, which then reentered the world as "Swiss typography." Eduard
Hoffmann knew exactly how the new typeface should look and entrusted
the design to Max Miedinger in Zurich in 1956. Miedinger was an expert
in grotesque typefaces. His sketches were discussed, assessed, and corrected
with Hoffmann and passed on to the Haas Type Foundry's in-house punch-
cutting works for casting in lead. The working name for this project in 1957
was New Haas Grotesque. In i960, the new typeface was published by
Stempel as Helvetica. When Linotype decided to adopt the new face, ini¬
tially for mechanical typesetting in lead and later for photosetting, they
had to rework the whole design. Helvetica was never planned as a full
range of mechanical and hand-setting faces.

Then followed the success of Univers, the highly extended typeface
family by Adrian Frutiger. Stempel was forced to redesign the whole range
in the method initiated by Frutiger, using numbers for the different mem¬
bers of the Helvetica family. Helvetica Light was designed by Erich Schultz-
Anker, artistic director at Stempel, together with Arthur Ritzel. In 1982,
Stempel launched New Helvetica. Helvetica was just what designers in the
early 1970s were looking for: a faceless, timeless typeface.

Type foundries kept in contact and conducted business with each other
at first regionally, and then, quite soon, on an international scale. Letters
were sold, copied, adapted, and released under various names, accommo¬
dating the trends of the time. If one firm had success, another wanted a
piece of the pie.

And to present and sell all these letters, type foundries published and
produced the most splendid, magnificent type-specimen proofs.

Remarkably little changed in the first
75 years of typography, printing, and
communication in Leipzig. For nearly
a century, artisans labored there with
pleasure. The foundry was established
in 1819 by Johann Gottfried Schelter
and Christian Friedrich Giesecke, who
had previously worked for Karl Tauchnitz
(see pp. 104-107). The foundation was
laid in the 1790s with the construction
of letterpress printing machines.