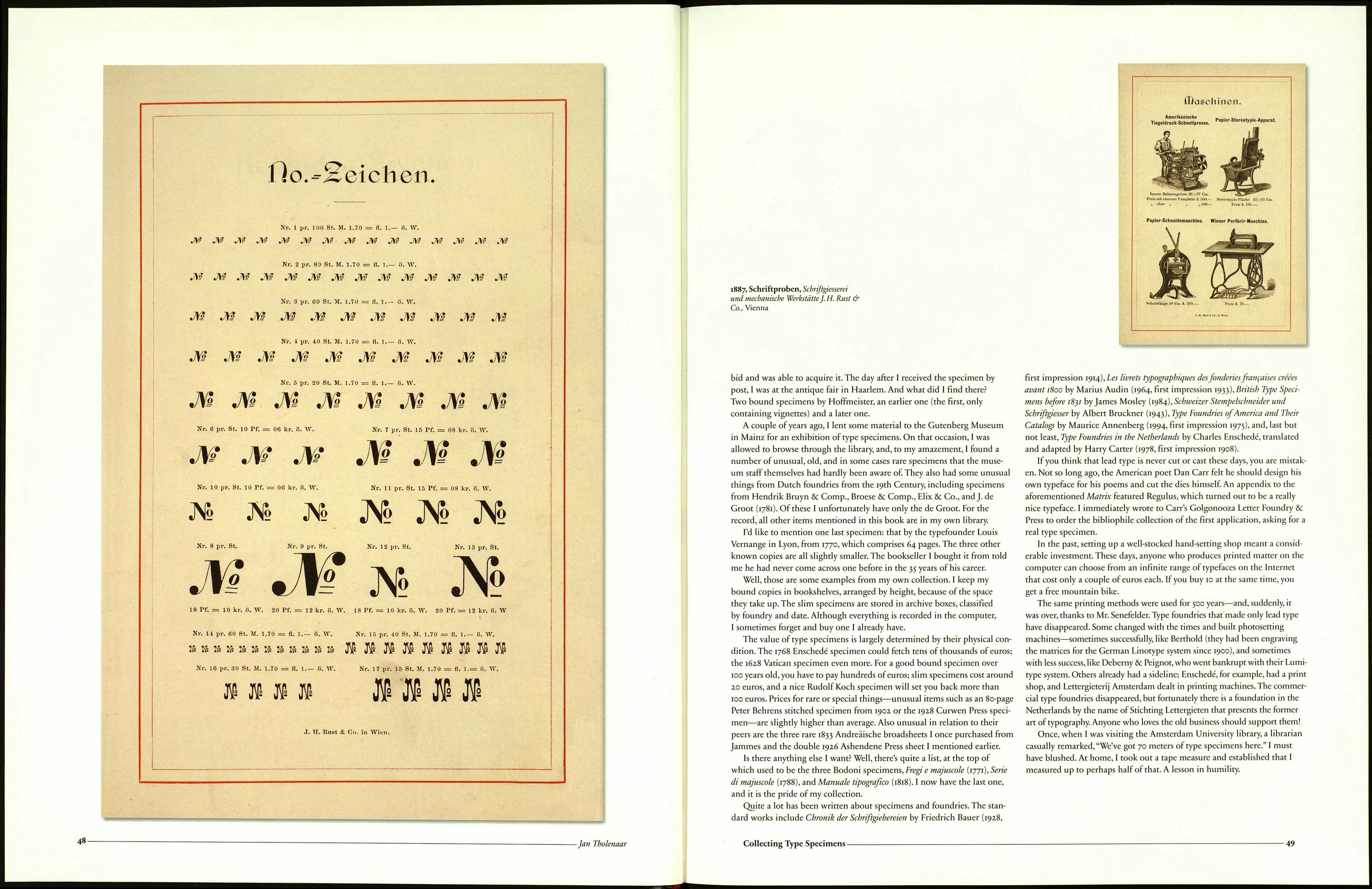 collaborate, resulting in the establishment of the American Type Founders.
Their first type specimen, a heavy tome of more than 800 pages, appeared
in 1896.

In the Hauptprobe, you can see that toward the end of the 19th Century
special attention was paid to titles and subheadings, which were presented
with colorful settings, in many hues, and with lavish use of ornaments,
many of them very lovely. All this must have stemmed from striving to
compete with lithography—a successful effort, it seems, as these specimens
are sometimes referred to in the catalogs of antiquarian booksellers and
auction houses as chromolithos, although the relief on the back clearly
indicates letterpress.

In the early 19th Century, at the age of 66, the French letter engraver
Henri Didot did the almost impossible by engraving a microscopically tiny
2.5-point type, the smallest ever made. Later, the punches and matrices
ended up in the possession of Johannes Enschedé & Zonen, who, in 1861,
printed the Dutch constitution, a booklet measuring 4.5 x 6.5 centimeters.
I bought one of the last copies at the Haarlem train station. Various firms,
including Enschedé, were selling off their remainders on the occasion of an
antiquarian book fair. Henri Didot was also the inventor of the polyamatype,
a mold with which you could cast up to 120 small letters at a time. His
cousin, Pierre Didot, who had inherited a printer's press, also developed
into a letter engraver. In 1819, his first specimen, Spécimen des nouveaux
caractères de la fonderie etc., was published. The texts are poems from his
own hand.

In 19th-century specimens from countries such as Germany, the Nether¬
lands, and America, the same ornaments, wood engravings, and such are
often found. You might wonder whether all ofthat was actually organized,
with contracts and royalties. Stereotypy had been in use for some time
already, and, from roughly 1840 onwards, it was easy to copy things galvani-
cally. Copyright was not protected in those days. (Mind you, I read some¬
where that, these days, 80 percent of software is used illegally ...)

Specimens including first showings of types are especially valuable to
collectors. I have one of Centaur, for example, with a preface by the design¬
er, Bruce Rogers; one of van Krimpen's Lutetia; and one featuring Carder
(1966), the first text letter designed in Canada, by Carl Dair.

One also, unfortunately, comes across type specimens on poor-quality
paper. Some paper from the second half of the 19th Century has failed to
survive the ravages of time and crumbles between your fingers. Sometimes

the quires of books were not sewn but stapled onto a linen strip. This
method may have been cheaper, but it was certainly not stronger. After all,
the staples rust. Type specimens weighing kilos, even very expensive ones,
were sometimes bound in a paper binding. The large Imprimerie Nationale
specimen, for example, was bound in fine, delicate glacé paper—which is
asking for trouble.

But damage can also be the work of vandals. Sometimes pieces have
simply been cut out of specimens, despite the request at the front of the
book not to do so! A good bookseller will check the volume for such
damage and mention it in his catalog. Jammes uses the nice term fenêtres
(windows) for such holes.

I have an extensive specimen from Gebroeders Hoitsema in Groningen,
with the date 1897 on the cover. The unusual thing about this specimen is
that the year of purchase, the supplier, and the weight are noted for each
type. A clear majority of them are from German foundries, which is per¬
haps not so astounding, in view of the geographical location. It would be
interesting to find out whether the German foundries sent their represen¬
tatives directly to the Dutch printers. In a few cases, an agent is named:
Klinkhardt (Van Meurs), Huck (R van Dijk), and so forth. It is also interest¬
ing to see the mention of smaller Dutch foundries such as G. W van der
Wiel & Onnes and De Boer & Coers. In 1869, the Hoitsema brothers also
purchased from Reed and Fox, the late R. Besley & Co, London (two-line
English Courthand).

One showpiece in my collection is a specimen from around 1847 from
the Groningen type foundry Van der Veen Oomkens & Van Bakkenes. In
the back, printed in color, are "Plates for Congreve printing." This system

"To Russia with Love." These samples for
export markets show faces for producing
posters, as well as letter and number
characters.

was intended for printing stocks and bonds in more than one color at a
time (in letterpress). This foundry, established in 1843 by Alle van der Veen
Oomkens, was taken over in 1857 by Onnes, De Boer & Coers and moved
the following year to Arnhem. In 1894, Enschedé took over the matrices.
I purchased a compiled Enschedé type specimen from the end of the 19th
Century that contains 145 wonderful pages by these type founders from
Groningen and Arnhem.

One special specimen from the United States is the 1882 Bruce. It is
comparable with the Derriey in its enormous range of borders and deco¬
rated letters. There is also a vast array of lovely electrotyped ornaments
illustrating professions, shop interiors, trade articles, and so forth. Bound
in is a sizable work by De Vinne on the invention of book printing.

Especially unusual are the broadsheet type specimens, all on one sheet.
The oldest surviving specimens are largely broadsheets. In the 20th Centu¬
ry, Monotype, for example, produced some creditable work in this format.
Highlights include the sheets Stanley Morison made for Monotype, the
Pelican Press, and the Cloister Press.

In the 1930s, the firm of Bom was used when the material from a
printing firm had to be auctioned, generally due to bankruptcy. I have
75 auction catalogs with the auctioneers' notes. The type up for auction
was printed in the catalog—in a single line and without the name, to be
sure, but these are nonetheless type specimens.

If you ask anyone which is the oldest surviving printer in the Nether¬
lands, they will probably say Enschedé. But it is, in fact, Van Waesberge.
You can read the company history in a type specimen from 1918. Van
Waesberge was established more than 400 years ago in Rotterdam.

According to a specimen from 1852, N. Tetterode, later Lettergieterij
Amsterdam, also started in Rotterdam. In part two of this specimen, from
1856, Tetterode calls himself an Amsterdam type founder. It was there that
he took over the De Passe & Menne foundry (I have their 1843 Proeve van
drukletteren specimen) in Bloemgracht. In the first supplement, he has
pasted his own name over the name of De Passe & Menne. In his early
specimens he still used the classic example text, which can also be seen in
18th-century specimens by Caslon, Fry, Wilson, and Bodoni: "Quousque
tandem abutere, Catilina, patientia nostra?'

One coincidence: At one point I only had three slim specimens by
Heinrich Hoffmeister, who started a type foundry in 1898 in Leipzig. So
when a specimen in book form came up for auction in Berlin, I put in a