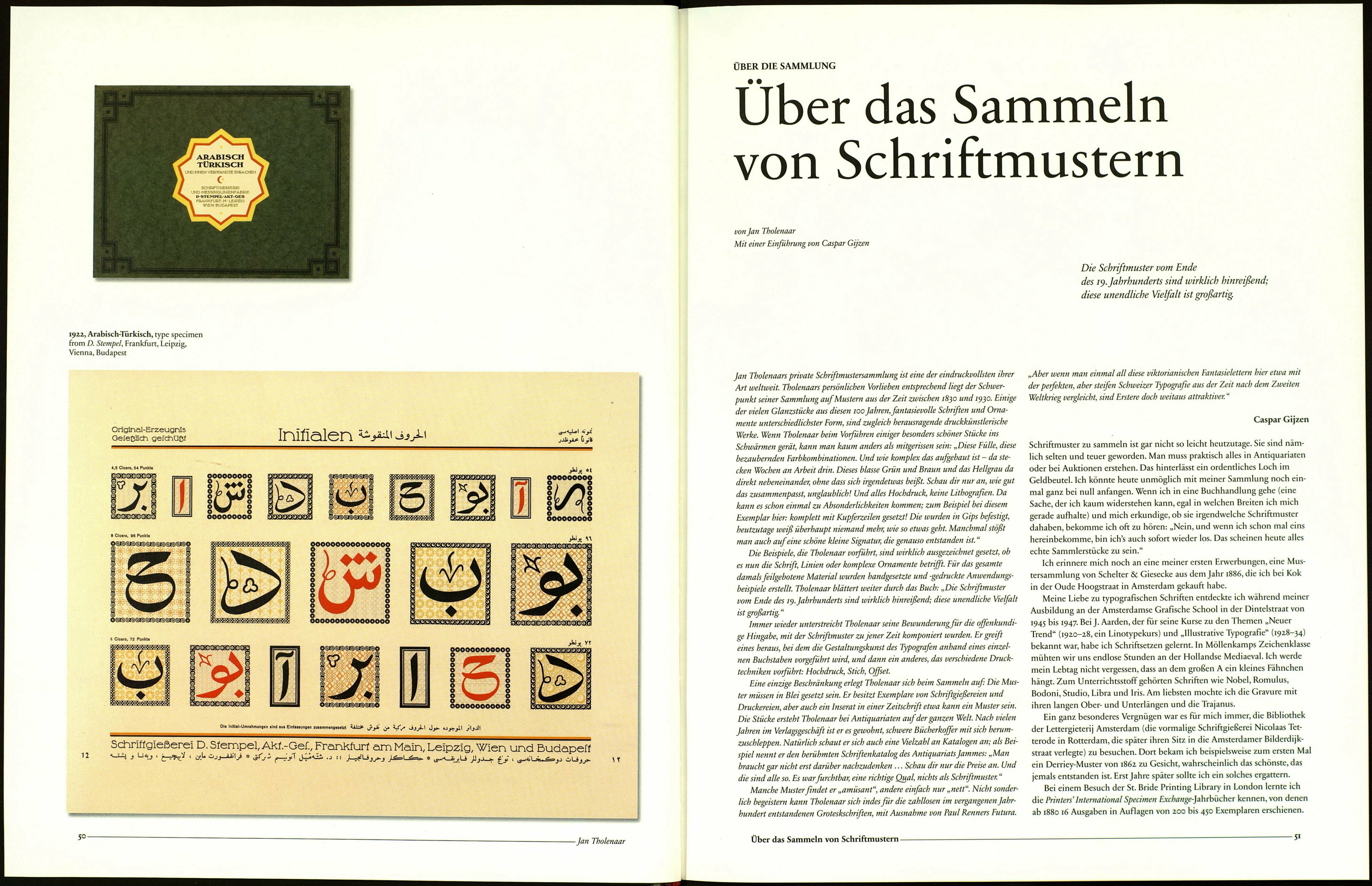 bid and was able to acquire it. The day after I received the specimen by
post, I was at the antique fair in Haarlem. And what did 1 find there?
Two bound specimens by Hoffmeister, an earlier one (the first, only
containing vignettes) and a later one.

A couple of years ago, I lent some material to the Gutenberg Museum
in Mainz for an exhibition of type specimens. On that occasion, I was
allowed to browse through the library, and, to my amazement, I found a
number of unusual, old, and in some cases rare specimens that the muse¬
um staff themselves had hardly been aware of. They also had some unusual
things from Dutch foundries from the 19th Century, including specimens
from Hendrik Bruyn & Сотр., Broese & Сотр., Elix & Co., and J. de
Groot (1781). Of these I unfortunately have only the de Groot. For the
record, all other items mentioned in this book are in my own library.

I'd like to mention one last specimen: that by the typefounder Louis
Vernange in Lyon, from 1770, which comprises 64 pages. The three other
known copies are all slightly smaller. The bookseller I bought it from told
me he had never come across one before in the 35 years of his career.

Well, those are some examples from my own collection. I keep my
bound copies in bookshelves, arranged by height, because of the space
they take up. The slim specimens are stored in archive boxes, classified
by foundry and date. Although everything is recorded in the computer,
I sometimes forget and buy one I already have.

The value of type specimens is largely determined by their physical con¬
dition. The 1768 Enschedé specimen could fetch tens of thousands of euros;
the 1628 Vatican specimen even more. For a good bound specimen over
100 years old, you have to pay hundreds of euros; slim specimens cost around
20 euros, and a nice Rudolf Koch specimen will set you back more than
100 euros. Prices for rare or special things—unusual items such as an 80-page
Peter Behrens stitched specimen from 1902 or the 1928 Curwen Press speci¬
men—are slightly higher than average. Also unusual in relation to their
peers are the three rare 1833 Andreaische broadsheets I once purchased from
Jammes and the double 1926 Ashendene Press sheet I mentioned earlier.

Is there anything else I want? Well, there's quite a list, at the top of
which used to be the three Bodoni specimens, Fregi e majuscole (1771), Serie
di majuscole (1788), and Manuale tipografico (1818). I now have the last one,
and it is the pride of my collection.

Quite a lot has been written about specimens and foundries. The stan¬
dard works include Chronik der Schriftgiebereien by Friedrich Bauer (1928,

If you think that lead type is never cut or cast these days, you are mistak¬
en. Not so long ago, the American poet Dan Carr felt he should design his
own typeface for his poems and cut the dies himself. An appendix to the
aforementioned Matrix featured Regulus, which turned out to be a really
nice typeface. I immediately wrote to Carr's Golgonooza Letter Foundry &
Press to order the bibliophile collection of the first application, asking for a
real type specimen.

In the past, setting up a well-stocked hand-setting shop meant a consid¬
erable investment. These days, anyone who produces printed matter on the
computer can choose from an infinite range of typefaces on the Internet
that cost only a couple of euros each. If you buy 10 at the same time, you
get a free mountain bike.

The same printing methods were used for 500 years—and, suddenly, it
was over, thanks to Mr. Senefelder. Type foundries that made only lead type
have disappeared. Some changed with the times and built photosetting
machines—sometimes successfully, like Berthold (they had been engraving
the matrices for the German Linotype system since 1900), and sometimes
with less success, like Deberny & Peignot, who went bankrupt with their Lumi-
type system. Others already had a sideline; Enschedé, for example, had a print
shop, and Lettergieterij Amsterdam dealt in printing machines. The commer¬
cial type foundries disappeared, but fortunately there is a foundation in the
Netherlands by the name of Stichting Lettergieten that presents the former
art of typography. Anyone who loves the old business should support them!

Once, when I was visiting the Amsterdam University library, a librarian
casually remarked, "We've got 70 meters of type specimens here." I must
have blushed. At home, I took out a tape measure and established that I
measured up to perhaps half of that. A lesson in humility.