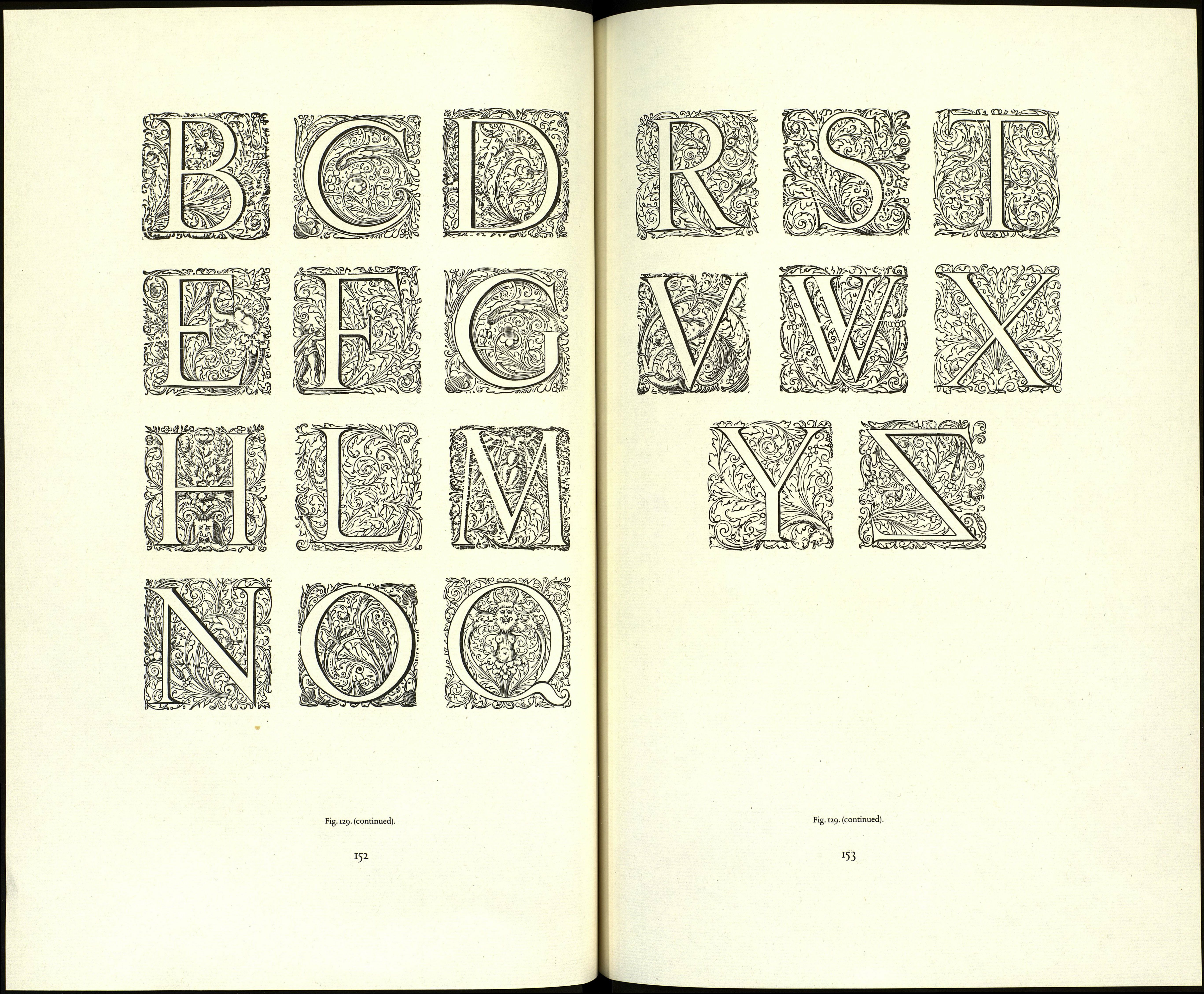 Other initials, the Ornamental initials No. ц of our inventory (fig. 129, pp. 151—x^\
[may have come] from the press of P. van Assendelft at Haarlem, sold on 26 March
1744. ' I have [preceded] them by an assortment of [eleven] letters of the same size
but perhaps of a later date, which have always been used by our firm to supplement
the others. The two alphabets provide an example [the letter Q] of woodcut artists
copying one another.

A printing house stocked with valuable old material was that of Michiel van
Leeuwen at Haarlem, sold on 7 April 1772.2 His smaller types were evidently of the
middle of the seventeenth century and he was well furnished with decorative ini¬
tials and woodblocks of equal interest. The sale, it may be imagined, was an oppor¬
tunity much relished by Johannes Enschedé for indulging his taste for old printers'
material and it yielded a large accession to his collection. He was especially anxious
woodcuts to secure some woodcuts made about 1660 by Dirk de Bray, son of the painter
by Dirk de Bray Salomon de Bray, of Haarlem. Although he was by trade a bookbinder, Dirk de Bray
shared the artistic propensities of his father and his elder brother, Johannes, even
to the extent of painting an occasional picture. The date of his birth is unknown, but
he was bound apprentice bookbinder in 1656 and served as secretary in the guild of
St. Luke in 1671.3 His 'Crucifixion' (fig. 143, p. 174) is believed to be the latest of the
woodcuts known to be his, and the original drawing for it is evidence that it was
made in 1677.4 So far as I can tell, De Bray never cut an alphabet: he made single
letters as they were wanted. I show such as have survived (fig. 130, p. 155).5

The catalogue of Van Leeuwen's sale included specimens of various initials,
some resembling the Gothic ones by De Bray and some of a different design. In
all likelihood these last are also by De Bray, but in any case they are by a very
talented artist (fig. 131, p. 155).

Bibles. Enschedé, who had for a long time been printing devotional and liturgical

books, bought these letters with an eye to a new quarto Bible. The nine blocks6

from Van Leeuwen not being enough, [he made the set up with blocks from another

woodcut initials source]. The A and the I are signed with a monogram PC;7 and the H bears the

by Hendrik Numaii signature of Hfendrik] Numan, who was a woodcutter working at Amsterdam [from

are shown in Van Assendelft's sale-catalogue, but they are not [6] A D I M S are original woodcuts, and С E H О are casts

the same as those on p. 151. mounted on wood. In the sale-catalogue of the late Michiel

van Leeuwen, Haarlem 1772. List of type-specimens No. 118. a heading meaning: 'no. i Decorated initial letters, 5 pieces

Dirk de Bray the introduction to the edition of his Kort which states that there are four pieces, casts mounted on

onderweijs van liet boeckenbinden (A short instruction in the binding of books) wood. A and D are used in Louis Elsevier's publication P.C.

[4] The drawing was made by Dirk's brother, Jan. This ap- those used by Louis Elsevier, of which the M was signed PC.

pears from his signature cut above Dirk's monogram at the [7] This artist had not been identified,
bottom of the cross. The date is not reproduced.