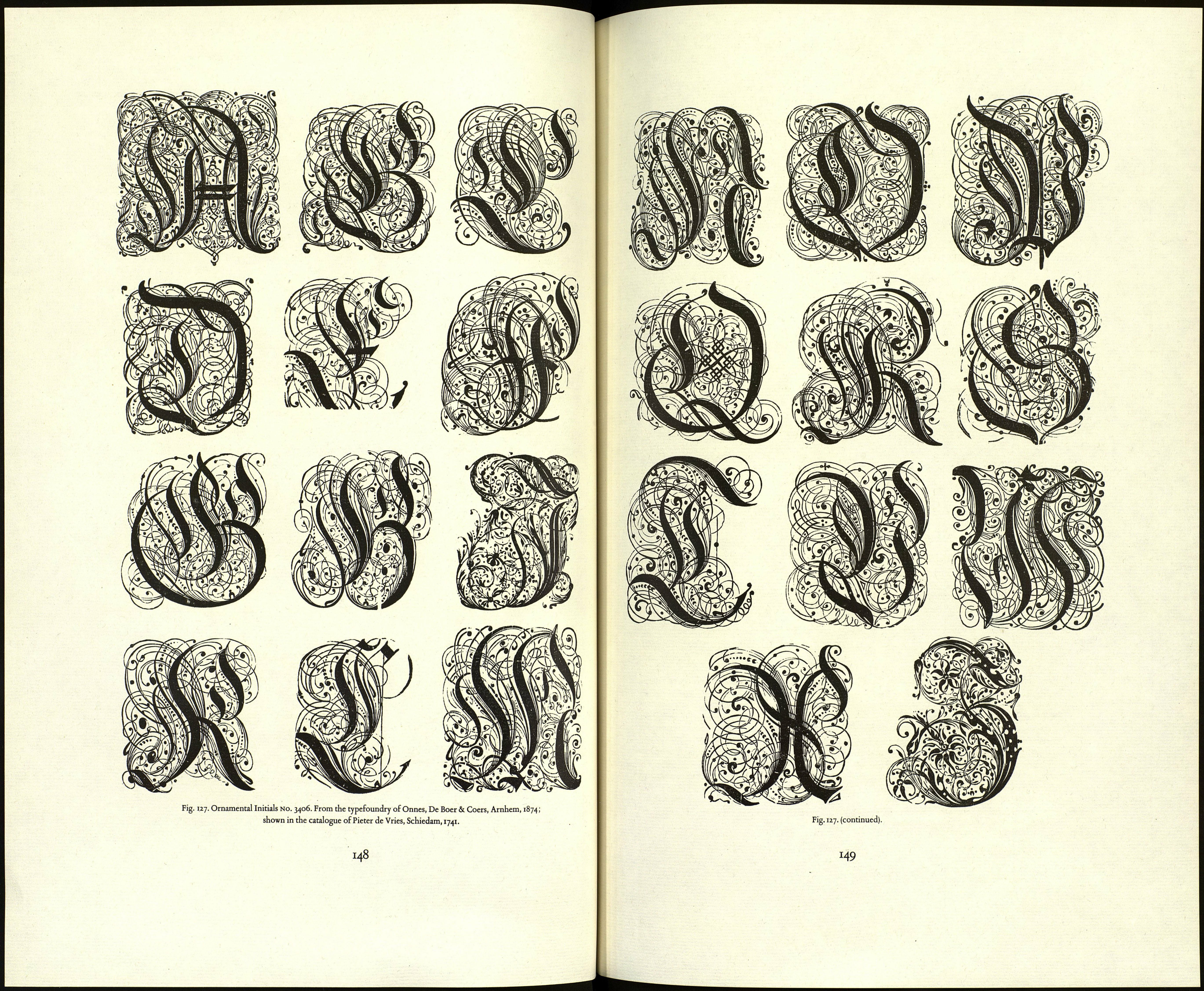 Before I end this chapter on our printers' material of the seventeenth century
I must give a brief description of the ornamental initial letters and other woodcuts
of which we have a great many. It is extremely hard to find out the origins of these
things, for the dates of books in which they occur are little indication of their ages :
many of them served over a long time, sometimes until the nineteenth century.
Nor is it safe to date them by their style, for we may well be looking at an imitation
of an older block. Mistakes, therefore, are easily made, and I stress the point be¬
cause in course of time it may be found that the cuts that I have placed in the
seventeenth century are in fait of a later time and some of those that I shall deal
with in the next chapter really belong in this.

First there is a set, the Ornamental initials No. 40 of our inventory (fig. 124), which
I find were in the printing office of R. C.Alberts at The Hague (1728). ' How they
became the property of our firm I do not know.

The printing equipment of Pieter de Vries at Schiedam, sold by auction in 1741,
included a set of initials which belonged to Blaeu.2 The catalogue lists a rich col¬
lection of decorative woodcut letters of a kind suggesting a date early in the seven¬
teenth century and the hand of an artist who had been alive in the previous century.
The style of the Gothic initial letters is quite consistent with an origin as early as
that and we know of numerous examples of letters like them in the German books
of that day. I am thinking particularly of the Gothic letters, the Ornamental initials
N0.41 and N0.42 of our inventory (figs. 125,126, p. 146).

The old initials, our Ornamental initials No. 4$, shown in fig. 128 are also from the
printing office of Pieter de Vries.

The set, our Ornamental initials N0.3406 (fig. 127, pp. 148,149) is not so old but remarka¬
ble for the beauty of the workmanship. The alphabet consists of letters from more
than one set. It is one that we acquired in 1894, when we bought the typefoundry
at Arnhem of Onnes, De Boer & Coers, a firm established about 1850. A concern
of such a late origin would not be expected to own material of historic interest,
and the faci: that it did is a reminder that such treasures may lurk in unsuspected
places.