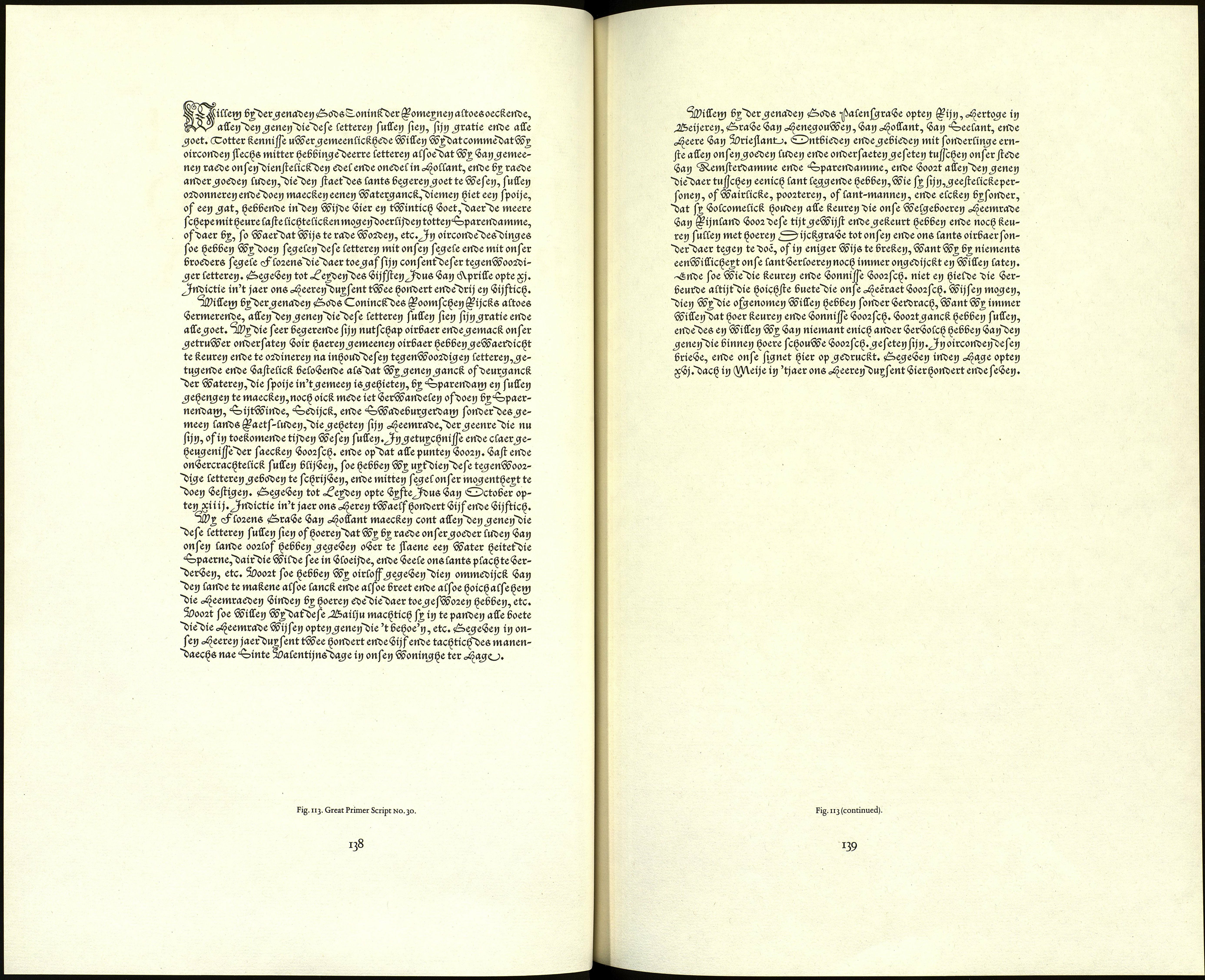 1730 he had the recuttings, of which DGf were used in his religious publication
Het leven des ßeests. They came, very likely, from the sale of the printing equipment
of R. С Alberts in 1728. In the sale-catalogue1 the А В С D J are shown under the
heading Loode Ещшг-Letters; 27 stub (Leaden decorated initials, 27 pieces). The set,
which is kept in the Museum Enschedé, consists of leaden' pieces, casts mounted
on type-metal. E and L are missing. X)

To judge by the types in their specimens the foundry of Anthonie & Hendrik
Bruyn was an old-established one. One of their types was a Script, now in our pos¬
session, evidently copied, as I have said, from an older Civilité (see p. 55). I think
it worth examining in detail.

Great Frimer Script N0.30 (fig. 113, pp. 138,139). Eleven of the capitals exist in two ver¬
sions, one of which is exaftly like our English-bodied Civilité No. 11 (see pp. 48,49).
These letters must, indeed, have been struck with the same punches as our Type
No. 11. Besides these the capitals F HIN Q S Z are the same in both types. As for
the other sorts, apart from С L T Y, they are so like the types bought by Jan van
Hout from Hendrik van den Keere, which, as I said, have since disappeared (see
p. 54), that we may safely assume that they were imitated from the older type.
The lower-case letters were so successfully copied that it is difficult to deteft the
difFerences.

But how are we to account for the existence of the two incomplete sets of capi¬
tals? I will hazard a guess. Some of the original matrices had been lost or damaged,
and the owner of the defeftive set bought replacements from a founder who had
the punches of our Type No. 11. The two founts are not altogether unlike, and in
those days printers did not insist very strongly on uniformity in their founts.2

[1] Proeve der drufcbrye Wan R. С Alberts. List of type-speci- [2] The face from which the lower-case letters and some

CIVILITÉ TYPE FROM THE BRUYN FOUNDRY

This Great Primer is rarely found in print. In the eighteenth century Civilité
was superseded by script types of a more modern fashion ; but in seventeenth-
century printing it is common to find them used in spite of obvious defefts.

Incidentally, I can prove that the intrusion of older capitals in our Type No. 30
goes back beyond 1700: there is a specimen, though far from a complete one, in a
sale-catalogue of the stock of a printer, Pieter Boeyesz, of Hoorn, auctioned on
14 May 1692, ' and it shows capitals of both kinds.

A synopsis of this fount follows.
13 capitals corresponding with those of Granjon's Bastarde:

4 capitals of a different design: С JÍ сф £
i8 capitals identical with those of our Civilité No. 11:

Granjon and sold to Plantin in 1567 (see note 3 on p. 54). Bastarde and that matrices for Granjon's St. Augustin Civilité

The earliest occurrence of Type No. 30 noticed so far is in were brought in to supply missing sorts. Moreover, John