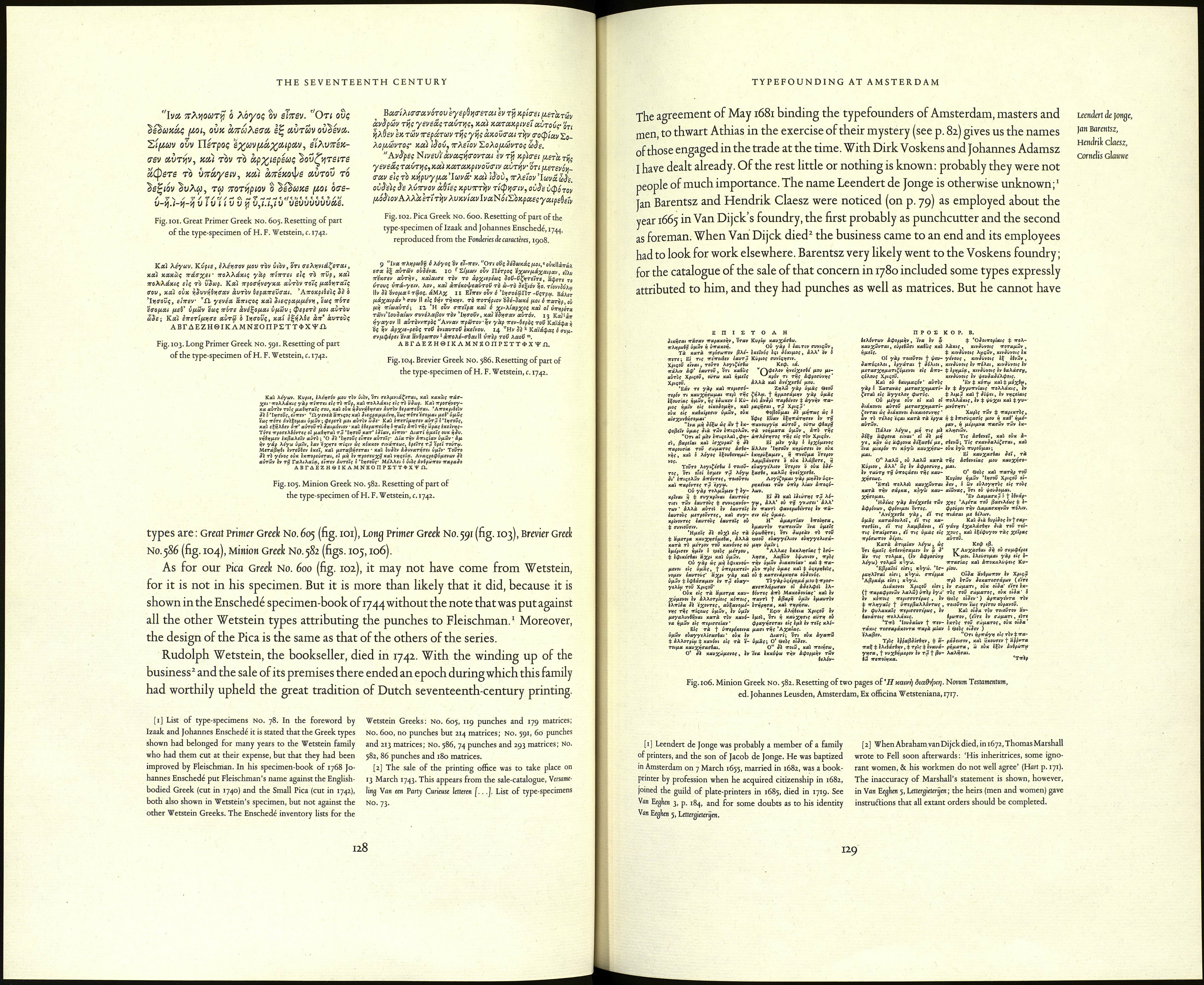 Prices and a legend that Voskens cast type for Peter the Great have been omitted. '
A little light is shed on the Voskens Foundry by the Hungarian printer and
typefounder, Nicholas Kis (see p. 131). 33

I have given more than one instance for a printer seeking to enhance the value of
his books by imposing restrictions on the founder when ordering type. It was a
fairly common practice to stipulate that the founder should not supply other cus¬
tomers with the same type during a certain time. Some bookseller-printers took a
pride in owning the matrices for their founts. One such was Joseph Athias, with
his fine Hebrew types. Others, Willem Blaeu for example, went so far as to set up
their private typefoundries. Among these were the Wets teins, father and sons, who
had a celebrated and flourishing printing business in Amsterdam towards the end
of the seventeenth century and in the early part of the eighteenth. Learned books
were their chief concern, and the Greek types needed for them were always cast in
their own matrices.

I will give a brief account of this family, drawn mostly from the book I wrote in
1893 for the jubilee of our typefoundry.2

On 22 June 1676 the guild of booksellers in Amsterdam admitted (Johann) Hein¬
rich Wetstein, born on 15 March 1649 at Basle, where his father, Johann Rudolph
Wetstein, was professor of theology and Greek. The younger Wetstein showed an
early inclination towards printing, possibly influenced by the Wetstein printing
office established at Ratzeburg in 1664 under the management of Nikolaus Riss.
Feeling that there was much to be learnt beyond the confines of his native city,
Heinrich Wetstein set out his travels, resolved to gain a thorough mastery of the
typographic art and to make acquaintance with the scholars in foreign countries.
Like his father, he was especially fond of Greek studies. He left Basle on 12 June
1666 and passed through various towns in Switzerland and France, where even at

[1] As for this tradition, it seems likely enough that the
Voskens Foundry supplied the Cyrillic type for the books
printed at Amsterdam by Peters's agent, Jan Thessing, before
Peter's reform of the Russian alphabet. Mr. A. F. Johnson has
identified one of the types of Jan Thessing with one in the
specimen of Johannes Rolu (Reed p. 64; reproduced in Type
Specimen Facsimiles 1, Sheet no. 15; List of type-specimens No. 35),
and Rolu said that 'he made Voskens' father by the letter he cut
for him' (Reed p. 208). But there are two sizes of Cyrillic in the
specimen of exotics of the Widow of .Dirk Voskens and Sons
(Copy and Print p. 126, Plate 160; List of type-specimens N0.40)
issued probably about 1700, which bear no relation to the type
on the Rolu-specimen. [These Voskens types were cut by the
typefounder Peter von Selow (who was said to be of Dutch ori¬
gin), not long before 1628, as was shown by С Björkbom, Naara
Antectaingar anaaaúe Ryslct Bohrycl i Svende, Nordisk Tidskrift for
Bok- och Biblioteksväsen 21, 1934, pp. 121—130. The editor is
much indebted to a translation into Dutch of this article by
Mrs Carina Ploos van Amstel, Middelburg. The use of the

Voskens types by Peter von Selow himself can be observed in
a Russian catechism printed by him in 1628, reproduced by
G. Rudbeck, Peter von Selow stilgjutare oclt hohryclare i Stockholm
1618-48, Festschrift Isak Collijn, 1925, p. 307. (L. H.)]. The new
Russian civil alphabet came in use some years after 1700, and
there is no evidence to conneft the Voskens Foundry with
it. It is known from Russian sources that a Dutchman, Anton
van der Mey, went to Russia in 1707, taking the equipment
for casting the civil alphabet in three sizes (P.P. Pekarskii,
Nauta i literatura pri Petre Velikom, 1862, 2, p. 642). Charles
Enschedé referred to two men whose family name was Van
der Mey, of Leyden (see note 1 on p. 68). It cannot be said
whether the typefounder who went to Russia in 1707 was a
Leyden man or not.

that date several of those who wrote in his album1 described him as experimentissimus
artistypoaraphicae.

In or about the autumn of 1671 Wetstein came to Amsterdam, and was received
on 6 December into the communion of the Walloon church on the recommen¬
dation of the congregation at [Geneva]. He went as apprentice to the house of
Daniel Elsevier and stayed there until 1676, when having been admitted to the guild
he set up in business as a bookseller. In 1678 he married Agatha Ernsthuys.2 After
Daniel Elsevier's death on 13 October 1680 Wetstein tried to carry on the business
in the interests of the widow, but the estate was so badly in debt that he was unable
to do so for long; and, in any case, the widow died soon after her husband.

Johann Heinrich Wetstein died on 4 April 1726, and his business passed to his
sons Rudolph and Gerard, Cj¿ partners since 1701. Their partnership lasted until
1726, when Gerard left the business and went to Utrecht.3

In 1726 Rudolph Wetstein bought the house in the Kalverstraat which had once
belonged to Clement de Jonghe, publisher of Rembrandt's etchings and the subject
of a portrait by the master. A year later he bought two houses in the Jonge Roelen-
steeg. In 1728 he rebuilt these houses and had £) the family emblem, a whetstone
sharpening a tool, carved over the door with this chronogram: DVM. teritVr. Cos.
Llteratls. VsVI. et. uteris, prosit, bonis (as the stone wears, may its loss profit the learned
and literature). That emblem, though with a different motto, had been used by the
elder Wetstein: it may be seen on the title-pages of some of his books with the
words Terar dum prosim (Let me wear, so long as I serve).

In 1735 Rudolph had begun the typefoundry to which our existing foundry is
the successor, as I shall show in the next chapter. Having thus enlarged the business
Rudolph virtually resigned it to his two sons and his son-in-law and withdrew from
active work. He gave up the old house in the Kalverstraat; and he and his wife,
Odilia, nee Cloeck, moved to a house on the Keizersgracht which he had bought
in 1734. His son, Jacobus, and his son-in-law, William Smith, took charge of book¬
selling; the press and foundry, at the rear of the bookshop, came under the care
of the other son, Hendrik Floris.

The stock of this foundry was all of eighteenth-century date, excepting five sets
of Greek matrices bought by Johann Heinrich Wetstein in Basle, from Pistorius
probably.« They came to our firm with the rest of the material of the Wetstein
foundry in 1743, and I can therefore show resettings of the four which appeared in
the specimen issued by Hendrik Floris Wetstein in [1743].5 In our inventory these

at Amsterdam. [4] There is a valuable note on these Wetstein Greeks in