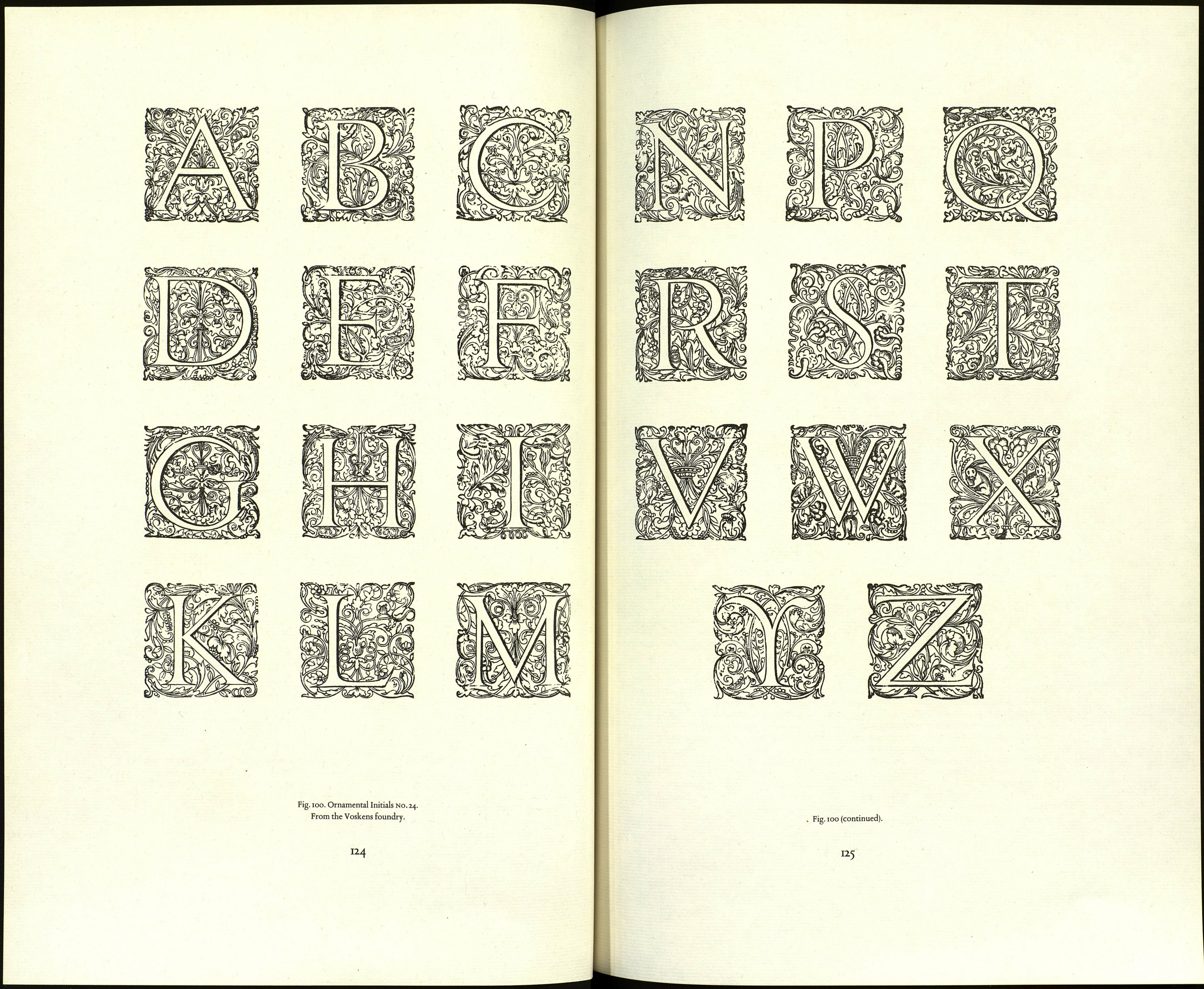 Examination of the impression of another set of decorated initials1 in the same
book led me to an interesting discovery. The impression is such as to leave no
doubt that they had been used many times before ; yet, in the sale-catalogue of 1695,
where they are described as a set of initials in palmwood,2 they appear as sharp and
clear as though they had seldom or never been printed before. From this I con¬
clude that Blaeu did not use the originals but printed from moulded reproductions
in metal, and my conclusion is borne out by an inspection of the impressions in
his book. The casts, I take it, were part of the equipment of the press, whilst the
original woodcuts were kept in the foundry and reserved for making new casts as
they were needed. The survival of the wooden master letters is more evidence that
the fire of 1672 did no damage in the typefoundry, which, I suppose, was still on
the Bloemgracht at the time.

"We have castings of an alphabet of decorated initials which appear to be recut-
tings of those which Blaeu used. They are the Ornamental initials No. 22 of our inventory
(fig. 97, p. 120). In the sale-catalogue of the printing equipment of Pieter de Vries
at Schiedam3 the P and E are shown as lot No. 4. Figuur Lettere op hout ßeslaaße 20. stub
(Decorated letters mounted on wood 20 pieces). It is very likely that Enschedé
went to this sale because a number of other initial letters included in it appear later
in his inventory.4

It is also possible that another set of Blaeu's initial letters was acquired by
Enschedé at the sale of De Vries' equipment. The A, C, D, E, F, and G are shown in
the sale-catalogue of Blaeu's press under the heading Capitolen op Palm-hout gesneeden,
20 stub (Capitals cut in palmwood, 20 pieces) with the manuscript note in the margin
revealing that Van der Wiel bought the set for 10 guilders and 10 stivers. In 1741
the A, C, D, E, and F are shown in the sale-catalogue of Pieter de Vries' stock as lot
No 15. Figuur Lettere op hout ßesneede, 21 stub (Decorated letters cut in wood, 21 pieces). They
are the Ornamental initials No. 23 of our inventory (fig. 98, p. 121).

[1] This and the following paragraphs about decorated ul, 744 D, that Härmen Aelberts bought them for 14 guilders,

in order to bring them in accordance with the aéfual fafts. Ordinaar Stad en Zegel Drulàer, Schiedam, 1741. List of type-

TYPES FROM BLAEU OR VOSKENS

I have given as complete a description as I could of such material as we have
derived from the famous Joan Blaeu. I must include as possibly his the Enalish-bodieà
German Rabbinical No. 648 of our inventory (fig. 99), which came to us from the Voskens
Foundry. We also have from that foundry a very beautiful set of initials in wood,
cut in all probability by Bartholomeus Voskens the elder.1 The set, the Ornamental
initials No. 24 of our inventory (fig. 100, pp. 124,125), is complete but for the O. It
was bought by the founder of our firm, Izaak Enschedé, not long after he set up
in business in 1703 from the Widow and Sons of Dirk Voskens. The earliest printing
by my ancestor shows that he bought his type from them, and on the first sheet
from his press of which we are aware—some verses in honour of the golden wed¬
ding of his wife's parents—he made use of one of these woodcut initials.

(J There is an interesting passage about the Voskens material in the Gedenhchrift
(pp. 63—64). Charles Enschedé did not include it in the present work; but it seems
valuable and worth translating.

Dirk Voskens was an extremely skilful punchcutter and typefounder in the latter part of
the seventeenth century... After his death his widow, dwelling on the Bloemgracht, carried on
his foundry... The renown of the business, which, according to the sale-catalogue, owned types by
Van Dijck and a certain Jan Barentsz [see pp. 129,130], as well as those by Dirk and Bartholomeus
Voskens, induced many people to go to Amsterdam on 16 August 1780 and try to possess
themselves of some part of the foundry's stock. But the high prices paid by the commission-
agent Posthumus caused nearly all those who attended the sale to go home empty-handed.
A copy of the sale-catalogue (annotated by Johannes Enschedé) informs us that the Brothers
Ploos van Amstel took home only the following: (1) wooden patterns in four sizes for the
Slavonic alphabet; (2) four sets of wooden patterns for moulding Roman capitals; (3) four sets
of wooden patterns for moulding Italic capitals; (4) lead patterns for three sizes of moulded
capitals; (5) lead patterns for large German letters; (6) matrices for an English-bodied Greek
cut by B. Voskens. Johannes Enschedé had to be content with some wooden patterns for five
sizes of moulded ornamented capitals, one with the extra letters for Greek; a few woodcuts and
several sets of wooden patterns for High and Low German moulded letters, both upper- and
lower-case. The typefounder De Groot, whose material will be mentioned later [see p. 145],
bought lead patterns for three sizes of moulded ornamented capitals and some vignettes, arms,
etc.; four-line capitals in leaden matrices; French Canon capitals in 'cast copper matrices' and
French Canon capitals in struck matrices. Apart from some matrices for titling capitals that
went to the Stichter heirs, of no concern to us, we will record the purchase by the typefounder
Bruyn [see pp. 136—140] of matrices for Great Primer and Pica old-fashioned script-hand or
running cursive.

[1] The set consists of castings mounted on wood. Pieter de little remembered in printing-history. It explains the rough

Vries had a set of 24 letters, also mounted on wood, of which workmanship of the large displayed lines on many old title-

mens No. 69). It is evident that at that time the praftice of controversional subject of 'chalcography' (see note 1 on p. 2,

moulding large letters and ornaments, in plaster of Paris and pp. 37-41).
presumably, was widespread; and it is curious that it is so