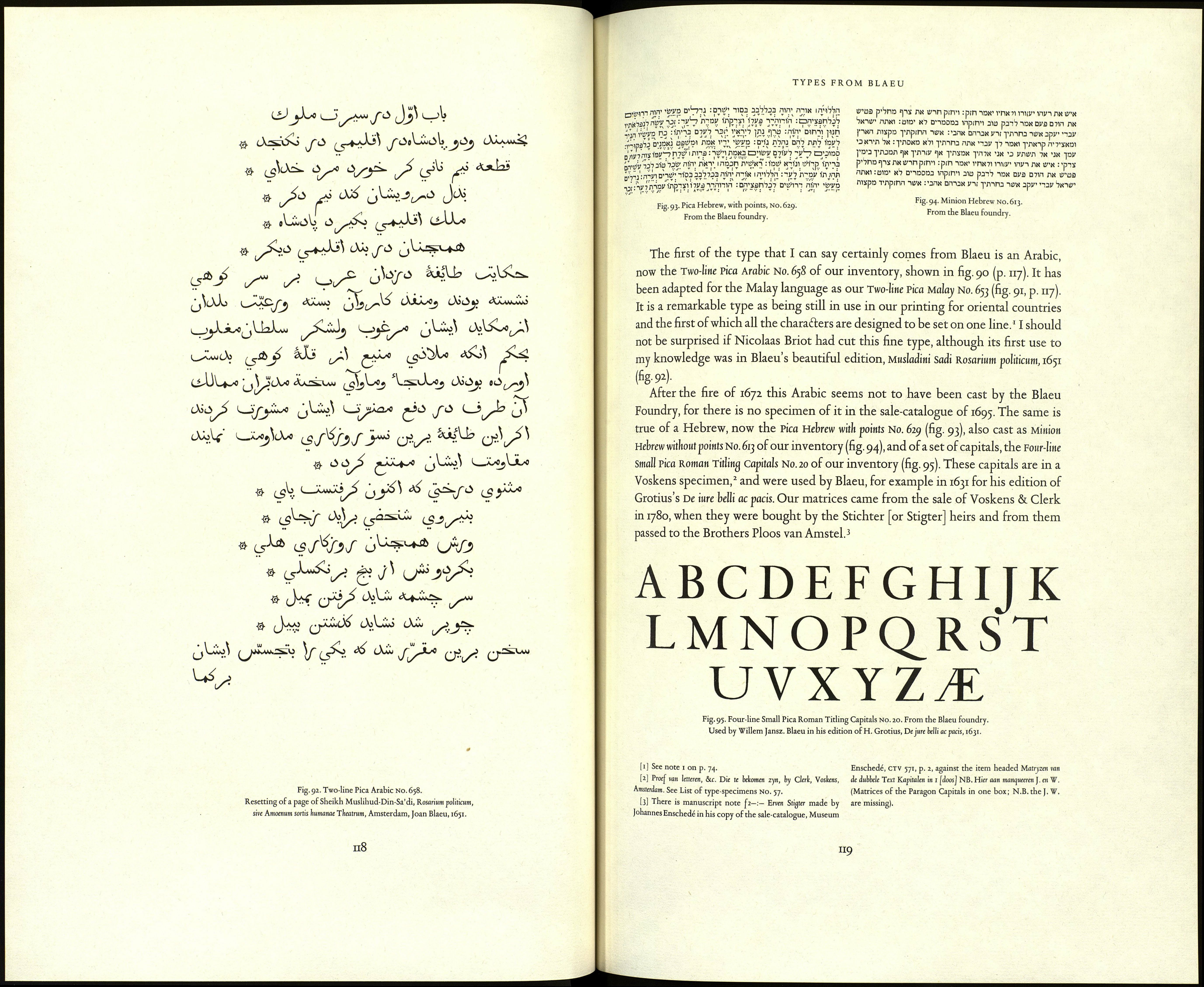 Dirk Voskens died [in June 1691].1 His widow carried on his business and issued
some type-specimens, which we have in our collection.2 Her types are for the
most part the same as those in the sale-catalogue of Blaeu's printing office and
typefoundry.

In the early years of the eighteenth century the Voskens Foundry produced
new specimens whose headings show that the widow had taken her two sons into
partnership. She doubtless came to rely much on one of them, Bartholomeus, the
godson of his grandfather. This second Bartholomeus was an expert punchcutter,
and he added some excellent new types to the stock of the foundry. After the
widow's death, her sons moved the business to the Oudezijds Achterburgwal, at
the corner of the Korte Spinhuissteeg, and took Moses Clerck who had married
their sister Anna Catharina into partnership, wereafter the firm was styled Voskens
& Clerk.3 When Clerk died in 1778 the entire concern was offered for sale, and
apart from a few sets of matrices, was bought by a commission-agent, Posthumus,
on behalf of Adam Gerard Mappa.4 Mappa re-established the foundry on the Leuve-

aieteriien). but because of his poor health it was decided that Moses

[2] Altogether fifteen specimens are known, some of the Clerk would pay him [1250 and that everything would be

widow, some of the widow and sons, and some by Voskens & shared equally between them. On the death of either one, the

Two are reproduced in Type Specimen Facsimiles 1, Sheets No. 8 Adam Voskens was buried on 27 September 1727 in the

They are all undated. One of the specimens in the Bagford been known as 'Voskens en Clerk' from 1725 onwards, was

Colleftion in the British Library,Harl.5930,leaf 236refto (not moved to the Oudezijds Achterburgwal: on 8 June of that

listed in Copy and Print), of German types, gives the founder's year approval was granted for the setting up of two furnaces

Johannes Adamsz. Coesvelt (see note 2 on p. 115) was the son wealthy businessman, made his will in the presence of the

of an Adam Coesvelt. See also note 1 on p. 109. notary Johannes Klinkhamer, a Master of Law. His only heir

[3] Anna Catharina Voskens, daughter of Dirk Voskens was his grandson. One condition of the will was that the type-

vided the following information, which adds much to what day a start was made with the drawing up of an inventory of

was previously known of the Voskens family. The widow his possessions: this includes an exaft description of the type-

been living on the Bloemgracht. Her two sons, Adam and extent of the trade of the Voskens foundry is illustrated by

Bartholomeus Voskens, obtained approval on 6 June 1715 for an incident where a complaint was made in 1700 by a book-

the placing of two furnaces for casting type in a house on printer H. W. Meyer, who lived as far as Lemgo, about the

the Lauriergracht, and on 16 November 1718 for two type- quality of the typemetal used by the widow Voskens in type

metal furnaces on the south side of the Lauriergracht, near sold to him. The Amsterdam guild of bookprinters arbi-

the Haasestraat. Bartholomeus II Voskens was buried on trated in this conflicf. See I. H. van Eeghen, De gilden, 1965,

the presence of the notary Lageman, Adam Voskens signed mentioned address. In the copy of the sale-catalogue (see

an agreement with Moses Clerk, his brother-in-law. Aaltje List of type-specimens No. 127) in the Museum Enschedé there

Coesvelt, their mother and mother-in-law respectively, had, is a manuscript note by Johannes Enschedé I in which he

in a will made in the presence of the notary David Doornick, states that everything was bought by the commission-agent

a Master of Law, bequeathed the shop of type-foundry, and P. Posthumus for 8,974 guilders and 5 stivers for the account

everything that went with them, to her sons Bartholomeus and of the Military Lieutenant Mappa, stationed at Groningen,

Adam. A condition of this bequest was that should either son whose associate was Wybo Fynje, newspaper publisher [and

die a bachelor, the other was to pay [2500 to her heirs, in- printer] at Delft. Johannes Enschedé adds that the foundry

SUCCESSORS TO BLAEU AND VOSKENS

haven in Rotterdam.1 But the new owner was no typefounder: his venture was
unsuccessful, and he left, in search of better fortune, for America. He set up in
New York in (J¿ I79°' an<^ his material was offered for sale on i February 1794.2
Some of his matrices came into the possession of the firm of Binny & Ronaldson,
established two years later in Philadelphia, whose successor, the MacKellar, Smith
& Jordan Company,3 was absorbed by the American Type Founders Company
in 1892.X) Mappa became a land agent at Olden Barneveld, near New York, and
died in [1828].

What is left of the material of the foundries of Blaeu and Voskens? The relics
in our possession, or at any rate the matrices, came to us from Ploos van Amstel,
whose specimens included only an Arabic of the types they derived from Blaeu.
I discovered the identity of the type by comparing it with some in Blaeu's books :
there was no other means of tracing it to its origin, for our older inventories and
records leave much to be desired in the way of fullness and accuracy. We knew that
among our sets of matrices there were some that had once belonged to Blaeu. The
preface to our specimen-book of 1825 says so,4 but is does not provide the means
of identifying them.

would, perhaps, be re-established at Delft. It must be noted [2] Information about Mappa was communicated to the

that the amount of [8,974:5:— was the total of the sale in author by Henry Bullen, one time Director of the American

which purchases by a few others were included. Johannes Type Founders Company in New York. It is in the addenda

Enschedé wrote the price paid for each lot against it in this to the original edition. It has been amended so as to accord

copy of the sale-catalogue. with subsequent research (see R. G. Silver, Typefounding in