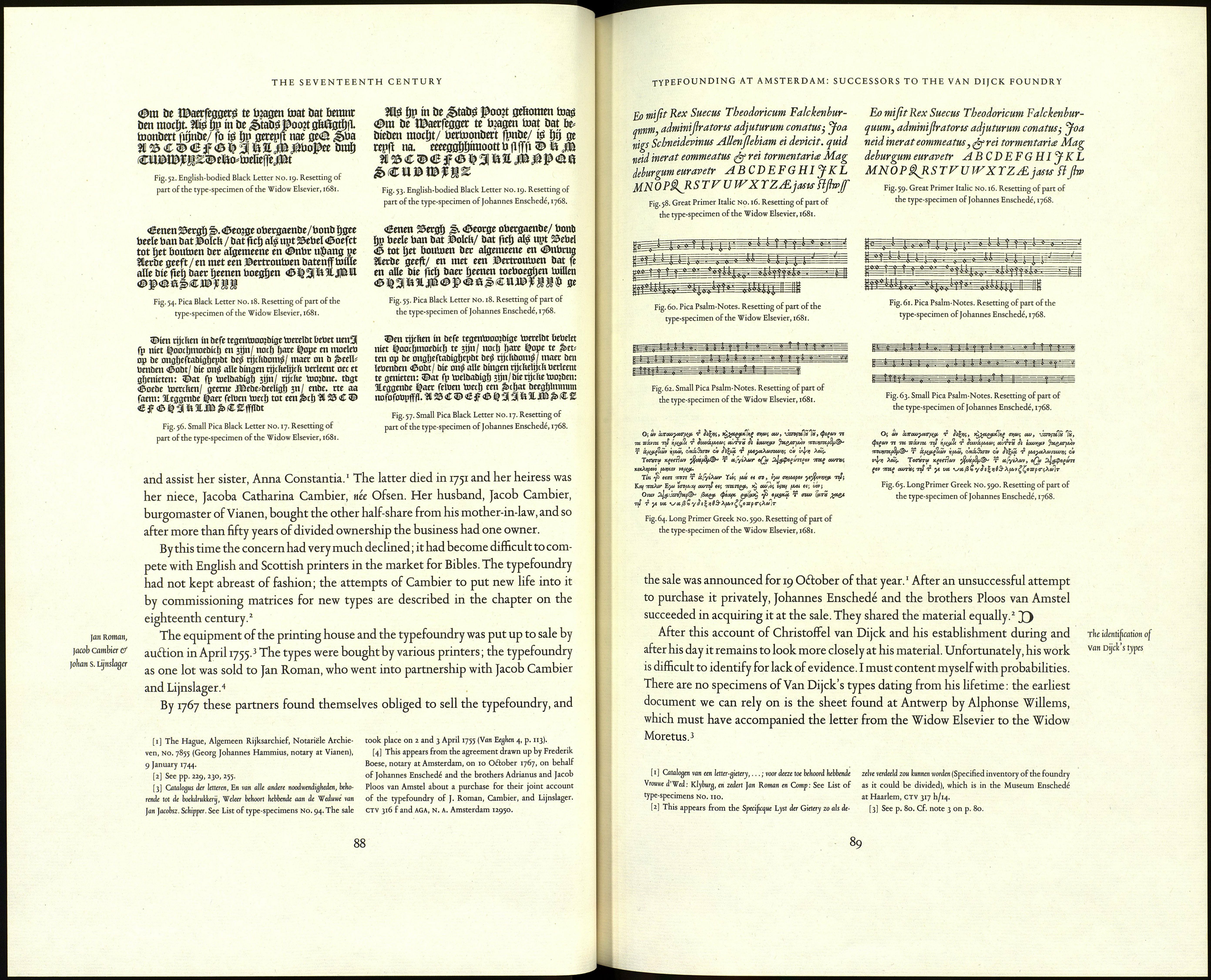 the accommodation of the Bible printing and the typefoundry, which were then in
the Zwanenburg[er]straat and the Utrechtse straat respectively. Athias undertook
to pay a rent of 1,373 guilders a year for the use of the new buildings. It was also
stipulated that the foreman, Jan Bus, was to render to the widow a weekly account
ofthe business, and that Athias was not to cast any type, even in his own Hebrew
matrices, without giving her notice beforehand.

A year and a half after signing this agreement Athias confessed himself deeply
in debt to the widow and ceded to her a half-share in the typefoundry. He and his
son, Emanuel, were declared bankrupt in 1695, ^ut tne property that he held jointly
with the Widow Schippers was evidently not brought into account. An advertise¬
ment in the Amsterdamse Courant of 31 May 1696 was very probably meant to reassure
customers that the bankruptcy had not affecbd the business of the partnership.
It was to this effect.: 'At the printing house and the typefoundry (of the late
Christoffel van Dijck) at Amsterdam, kept by Athias opposite the Nieuwe Plantage,
any man may at once be furnished to his satisfaction, whether with printing or
typefounding'.

The Widow Schippers died 17 November 1699,' leaving her half-share in the
English Bibles, the printing business, and the typefoundry to her grandson, Gijsbert
Dommer. Joseph Athias died on 4 May 1700, and his property passed to his son,
Emanuel. The privilege for English Bibles expired in 1703 and was not renewed.

Not long afterwards, probably in or about 1707, Emanuel Athias sold his interest
in the business to Jacob Cleyburgh, husband of the Widow Schippers' youngest
daughter, Cornelia, acting on behalf of his wife. She was the mother by a previous
marriage of Gijsbert Dommer and disliked the bequest to him mentioned above.
In 1716, however, Cornelia, née Schippers, widow of Jacob Cleyburgh since 1712, and
Gijsbert Dommer came to an agreement. Their respective shares in the typefoundry
and the printing business were merged and they declared that from now on each
owned half the typefounding and printing business and that they were sharing
equally in its profits. Gijsbert Dommer appears to have taken an active part in the
business and to have visited England from time to time acting as a salesman for
the typefoundry. He is known to have negotiated at least one substantial order.2
He died in London on 4 October 1725.3

This establishment, which shared with that of Voskens the bulk of the type-
founding in the Netherlands during the last decade of the seventeenth century

[1] Kleertaoper-Van Stoctatm p. 705. whom Rowe Mores attributed the cutting of the Samaritan

Ouleander, his foreman afting apparently as his representative 337—338), and the Gijsbert Dummer who supplied a copy of

in Amsterdam, about founts ordered by John Baskett, King's the Christianismi restitutio of Servetus for a clandestine and un-

TYPEFOUNDING AT AMSTERDAM: SUCCESSORS TO THE VAN DIJCK FOUNDRY

and the first half of the eighteenth, was the subject, of numerous settlements and
testamentary dispositions by descendants ofthe Widow Schippers which resulted
in divided ownership. The owners do not seem to have regarded this enterprise as
needing investments of capital and artistic endeavour. More or less left to the
management of foremen, Jan Bus from 1683 until his death in 1718, and after him
his son-in-law, Pieter Ouleander,' it lived on its reputation and continued to dis¬
pense typefaces of the seventeenth century. Cornelia Cleyburg, however, was in
control of the concern for a long period until she died in 1743, and it came to be
known as the Widow Cleyburgh's.

At that time the aftual owners, for a half-share each, were her two daughters,
Catharina Maria (since 1725) and Anna Constantia (since 1730). After the death of
her mother Catharina Maria, who was married to Jan Ofsen and lived at Vianen,
authorized Johan Servaas Lijnslager at Amsterdam to do everything in her name