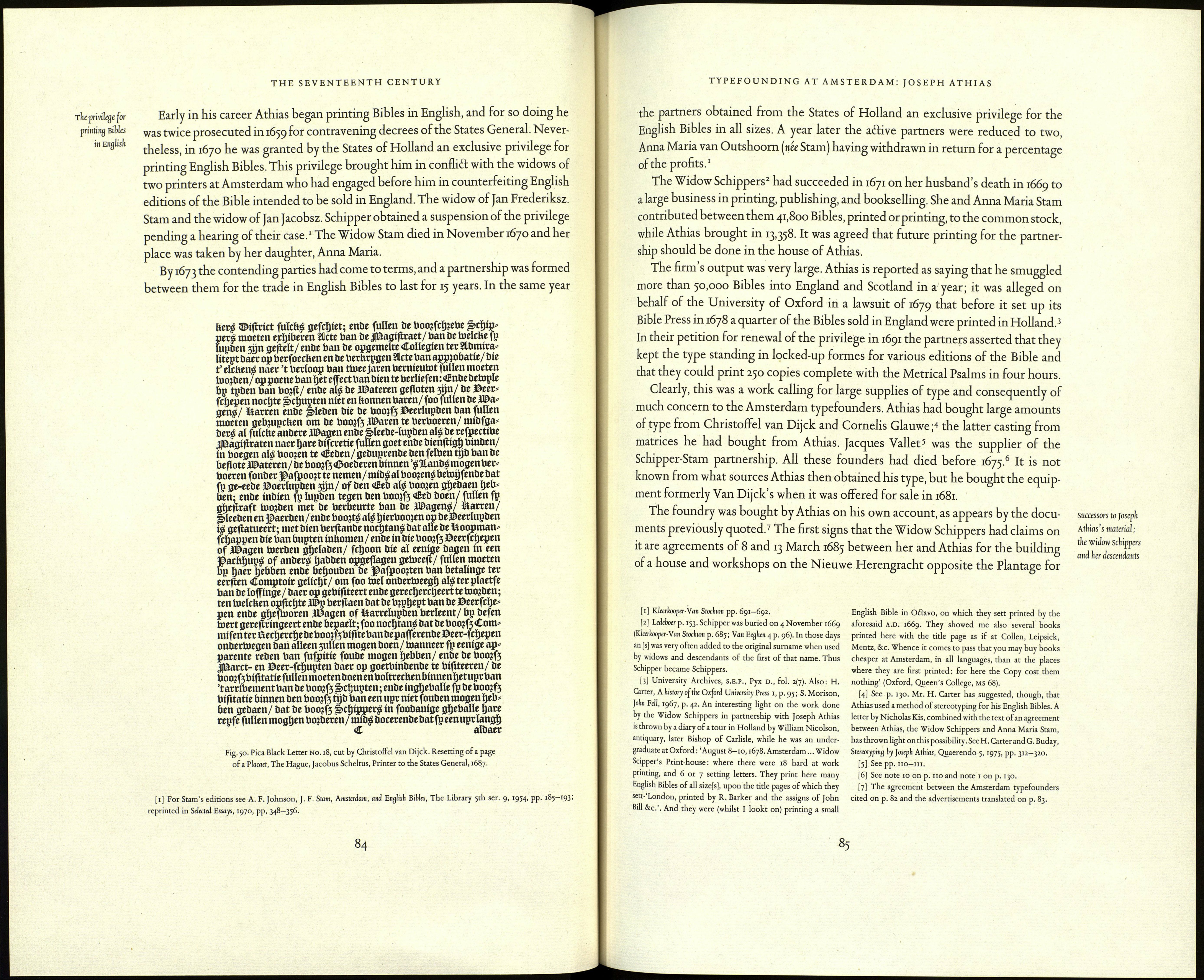 josepli Atltias by a well-known Jewish printer and bookseller, Joseph Athias, the typefounding
trade conspired to hinder him from exercising their craft. A covenant to the fol¬
lowing effect, was sworn before the notary Hellerus.

Dirk Voskens, Johannes Adamsz, Jan Barendsz. [Hessingh], Leendert de Jonge, Hendrik Claesz,
master letter-founders; Jan Verley, Jan Paulus, Jan Piersen van Bleyswyck, Jan de Stries, Härmen
Harmensz, Evert Jansz. van Ratingen, Härmen Coenraadsz. Mandelsloo, and Clement Hen¬
driksz, journeymen letter-founders; - have agreed among themselves that the masters will keep
the journeymen employed so long as they have work to give them and will give no work to
other journeymen ; the latter undertake to work on condition that neither masters nor men shall
be allowed to handle certain matrices sold this day in the Handboogsdoelen coming from the
estate ofthe late Daniel Elsevier, made by Christoffel van Dijck, bought by Joseph Athias.

On pain to forfeit ioo silver ducats to the Board for Relief of the Poor of the Reformed
Church. 14 May 1681.

Fig. 49- English-bodied Black Letter no. 19, cut by Christoffel van Dijck.
Resetting of a page of an Ordonnante, The Hague, Jacobus Scheltus, Printer to the States General, 1687.

For two years this compact, had the intended effect, of preventing Athias from
profiting by his purchase; but in 1683 he seems to have engaged hands enough to
enable him to begin practice as a typefounder. A notice to this effect, appeared in
the Extraordinaire Haerlemse Donderâaeghse Courant of 17 June 1683.

Notice is hereby given that the excellent and very famous typefoundry ofthe late Christoffel
van Dijck, which was sold by the successors to the late Daniel Elsevier, with sundry other matrices
both Greek and Roman assembled by the said Elsevier during his lifetime, is once more es¬
tablished in Amsterdam. Whoever is minded to work there may address himself to Jan Bus at
the house of Sieur Joseph Athias, where he is in service all day. The price ofthe letter is the same
as Van Dijck's and Elsevier's.

A month later, on 15 July, there was a similar advertisement showing that
Härmen Coenraadsz. Mandelsloo, despite his oath, had entered the service of
Athias. But it also shows that Athias was still short of hands.

The famous typefoundry of the late Christoffel van Dijck, which was sold by the successors
to the late Daniel Elsevier, with sundry other matrices both Greek and Roman assembled by
him, is once more established in Amsterdam. Whoever is minded to work there may address
himself to Mr. Hermannus Mandelsloo or Jan Bus at the house of Sieur Joseph Athias, where
they are in service. The price of the letter is the same as Van Dijck's and Elsevier's. And if any
journeymen be desirous of working in this foundry, they are requested to apply by letter or
otherwise, and we can promise them employment forthwith and for a long time.

For three years the foundry seems to have existed precariously. By means of an
advertisement in the Extraordinaire Haerlemse Donderdaeglise Courant of 25 April 1686
Athias tried once more to attract, attention to his enterprise.

Whereas the enlarged letter-foundry of Christoffel van Dijck was set up anew in Amsterdam
some years ago, and owing to unfortunate circumstances could not fulfil all demands (to the
regret of its owners), notice is hereby given that this foundry is now once more established so
that everyone may be better suited than before, moreover with curious and elegant print for
all European and Oriental languages. Enquire of Jan Bus at the house of Sieur Joseph Athias,
on the Nieuwe Herengracht opposite the Plantage.1

Cj¿ Joseph Athias came of an ancient Spanish family. He was born in Lisbon,
about 1635, and at an early age he was sent to Hamburg to receive an orthodox Jewish
education. From there he moved to Amsterdam about 1657, where the first of his
Hebrew books came from his press in 1659. On the completion of his famous He¬
brew Bible in 1661 he was received into the printers' guild of Amsterdam.2

Dijck Foundry has become known in more detail since Charles the Jewish Encyclopedia 2, pp. 268-269, where his birthplace

Enschedé wrote and since the publication of Type Specimen is given, however, as probably Cordova. When Joseph Athias

Facsimiles 1 in 1963. Many fails in the following bracketed para- applied for the publication of the banns of his intended

or the matter by Dr. I. H. van Eeghen in Dc Ainsterdanise boeb (Kleerboper-Van Stoclaim p. 10, where his admission to the guild