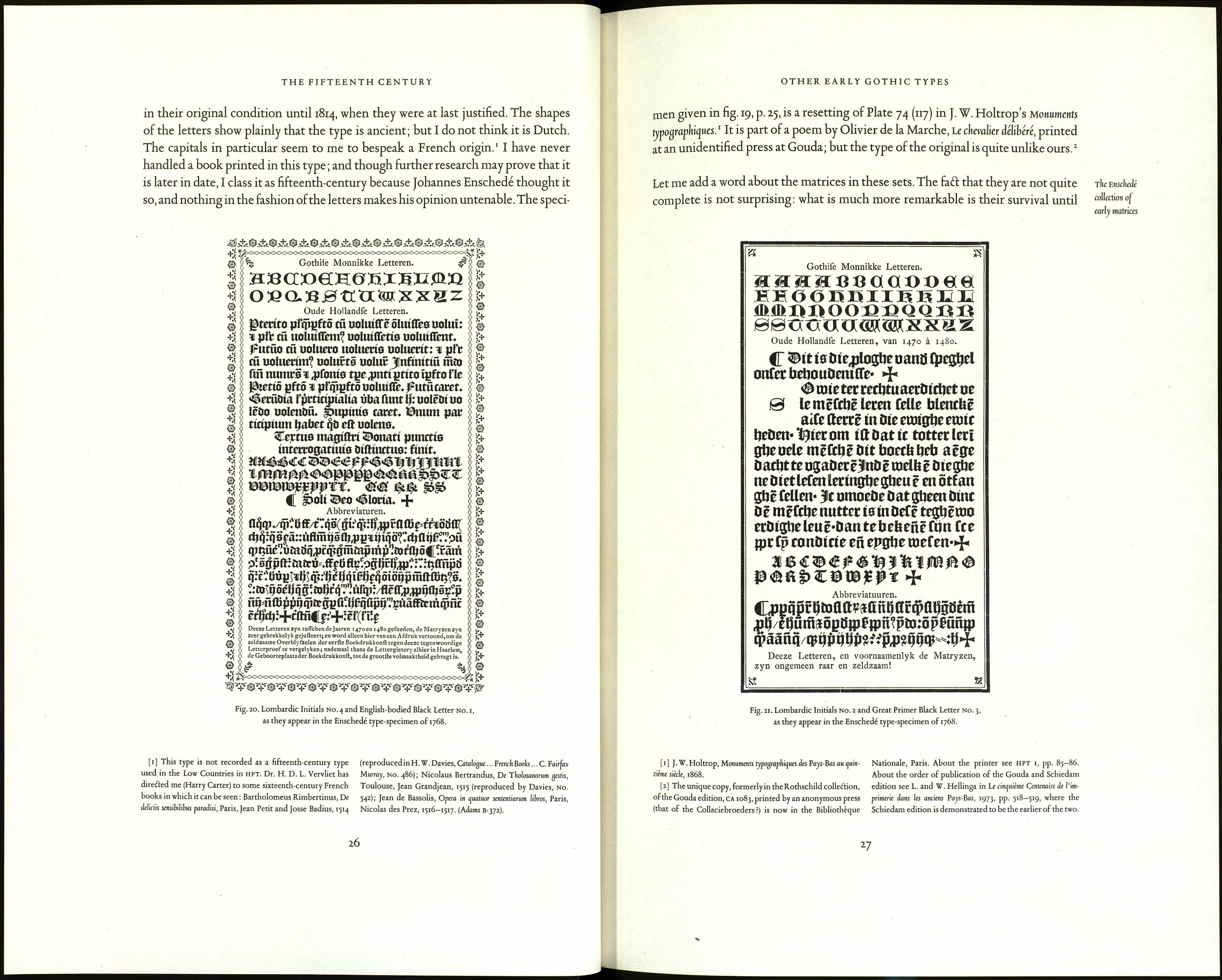 appointed in 1577, and he continued to print on his own account after losing his
official position in 1582.

Albrecht Hendricksz moved in 1590 from Delft to The Hague, more convenient
for the performance of his duties, and in the following year he was made Printer to
the States General. He was a prominent man, several times councillor and burgo¬
master. He died on 30 March 1613 and was buried in the Oude Kerk at Delft. He
seems to have had no son, but his second daughter, Magdalena, married Hillebrant
Jacobsz. van Wouw, who had taken over the printing business by 1605. Van Wouw
became Printer to the States on 25 February in that year...1

On giving up his business in 1669, Hillebrant van Wouw, son of the first of the
name, sold his press and printed stock. The Oprechte Haerlemse Courant of 8 and 22
March 1670 published an advertisement to the effect that:

On Wednesday 26 March 1670 Hillebrant van Wouw at his house at The Hague will sell
publicly to the highest bidder a great quantity of Bibles, Testaments, Psalm-books, statute
books,..., matrices, punches, and type for Pearl Black Letter and Roman, maps of the siege of
's-Hertogenbosch,...

That the sale duly took place is confirmed by the auctioneer's account to the
burgomasters for dues payable to them on 'the sale in the Market Place by order
of Master Hillebrant van Wouw of all books, letter, copper plates, and woodcuts',
still preserved in the Municipal Archives of The Hague.

Who bought our matrices is not known, there being a hiatus in the register of
public sales. It would not be surprising if the Amsterdam bookseller and printer,
Daniel Elsevier, had been the purchaser, for the matrices were found in 1767 in the
stock of his successors, Jan Roman & Company. I shall show in a later chapter that
this typefoundry was bought in that year by Johannes Enschedé and the brothers
Ploos van Amstel. One term of the agreement between the joint purchasers was that
the old matrices should be allotted to Enschedé. Nor can there be any doubt that
matrices for the fifteenth- and early sixteenth-century typefaces whose history I am
tracing were among those belonging to Jan Roman & Company ; so much is known
from notes made by my ancestor and Fleischman dated in the year 1765.

The notes are about the nature of the earliest matrices, and the writers refer to
some they had seen in the letter-foundry of Jan Roman & Company on the Nieuwe
Herengracht at Amsterdam. There is a later marginal note in Dutch by Johannes
Enschedé : 'Afterwards I acquired these precious matrices'2.

[1] A passage has been omitted relating to the succession mer presence of the matrices in the foundry of Jan Roman,

[2] The notes cannot be identified with certainty in the col- specimens No. 114. After the specimen properthree leaves were

lection of the Museum Enschedé. In notes by J. M. Fleischman given with the ancient type preceded by a separate title-page :

duced in figs. 20 and 21 (pp. 26,27), and added his remarks to this effect.: 'These
letters were cut between the years 1470 and 1480. The matrices for them are very
faultily justified, and this impression is made only to permit of a comparison be¬
tween these interesting relics of early printing and our specimens of present-day
types ; and further, as a reminder that letter-founding has reached the highest pitch
of perfection here in Haarlem, the birthplace of printing' (fig. 20, p. 26).

Great Frimer Black Letter No. 5. After making these acquisitions from Jan Roman & a type of French
Company Johannes Enschedé drew up an inventory of the stock of his foundry. or,8m
Among the things in the list is a strike of 63 old letters. The box in which it was kept
is still in our possession, and has an inscription to the effect, that these unjustified
matrices were made from punches cut in Holland before 1500. He never found time
to put these matrices in a fit state for casting before his death in 1781. They stayed