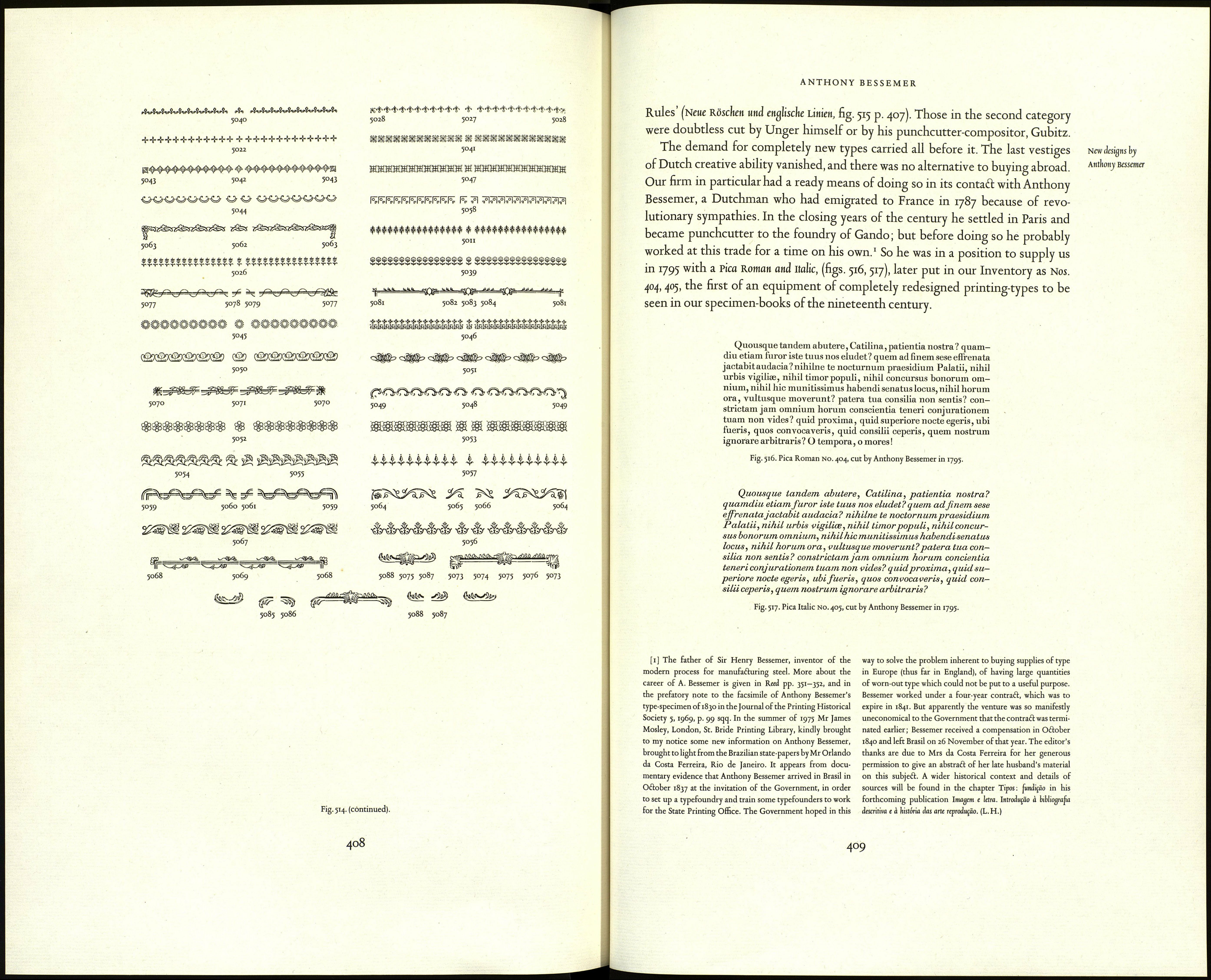 his. It may be that the entry in our accounts is inaccurate and really relates to a
Great Printer Italic by Ulrich Amman.

This face, though of no great merit, is of interest because, as we think, it is an
essay in the manner of the French master Fournier le jeune.1 Strange if so: be¬
cause the reputation of Fournier, once so familiar here in Holland, had by this
time been supplanted by that of Didot. What Fleischman had once been Didot
was then: no typefounder failed to make capital out of his name. We have used the
wording of Amman's specimen for our setting of his Great Primer Italic No. 85/7 (fig. 504,
p. 404) to illustrate the point; for he took as his text some expressions by the
great French typefounder. As much admiration for Didot's types and for any made
in his style was prevalent in other countries. A little specimen from Germany2 is
headed 'Prillwitz's specimen of new French or so-called Didot-style Types' (1791),
and our only specimen by Hendrik van Staden, the probable successor to De Groot,
has this title : 'New Roman on English body after the fashion of M. Didot of Paris'.3
Among our old matrices are some for a Paragon Roman lower-case in this taste,
No. 898 (fig. 505, p. 404) for which we also have the punches, but I do not know
who cut them or how we came by them.

What is more to our purpose is the content of Unger's specimen (see p. 368)
issued at Berlin towards the end of the eighteenth century and described as
'Specimens of Didot-style and ordinary types',4 though it contains nothing in the
way of ordinary types. Under the head of 'Didot-style Types' it makes us ac¬
quainted with a range of Roman and Italic faces of which several, much to my
regret, are now incomplete or absent. I illustrate those that are left (figs. 506—513,
pp. 405, 406), enough testimony to the impressive achievement of this German
typefounder.

To round off" the display of Unger's work I show the ornaments which came
to us from him (fig. 514, pp. 407,408). These he put under two heads. The 'Ordinary
Flowers' ^Ordinäre Röschen) were at the end of the book, while the others came im¬
mediately after the Didot-style types and were called 'New Flowers and English

[i] A curious judgment. Fournier's design was much more reasons for dating it in 1792 or for thinking that Van Staden

robust as well as more accomplished. acquired the business of De Groot. A specimen issued by

[2] Prillwitz Proben von neuen französischen oder verbesserten щепатеп De Groot at Malines in 1788 has since come to light, List of

Fig. 515. Ornaments which appear in the Unger specimen under the title 'neue Röschen und englische Linien',

certainly cut by Unger himself.

Fig. 514. Ornaments which appear in the Unger specimen under the title 'ordinäre Röschen'.
They cannot be ascribed with certainty to Unger himself.