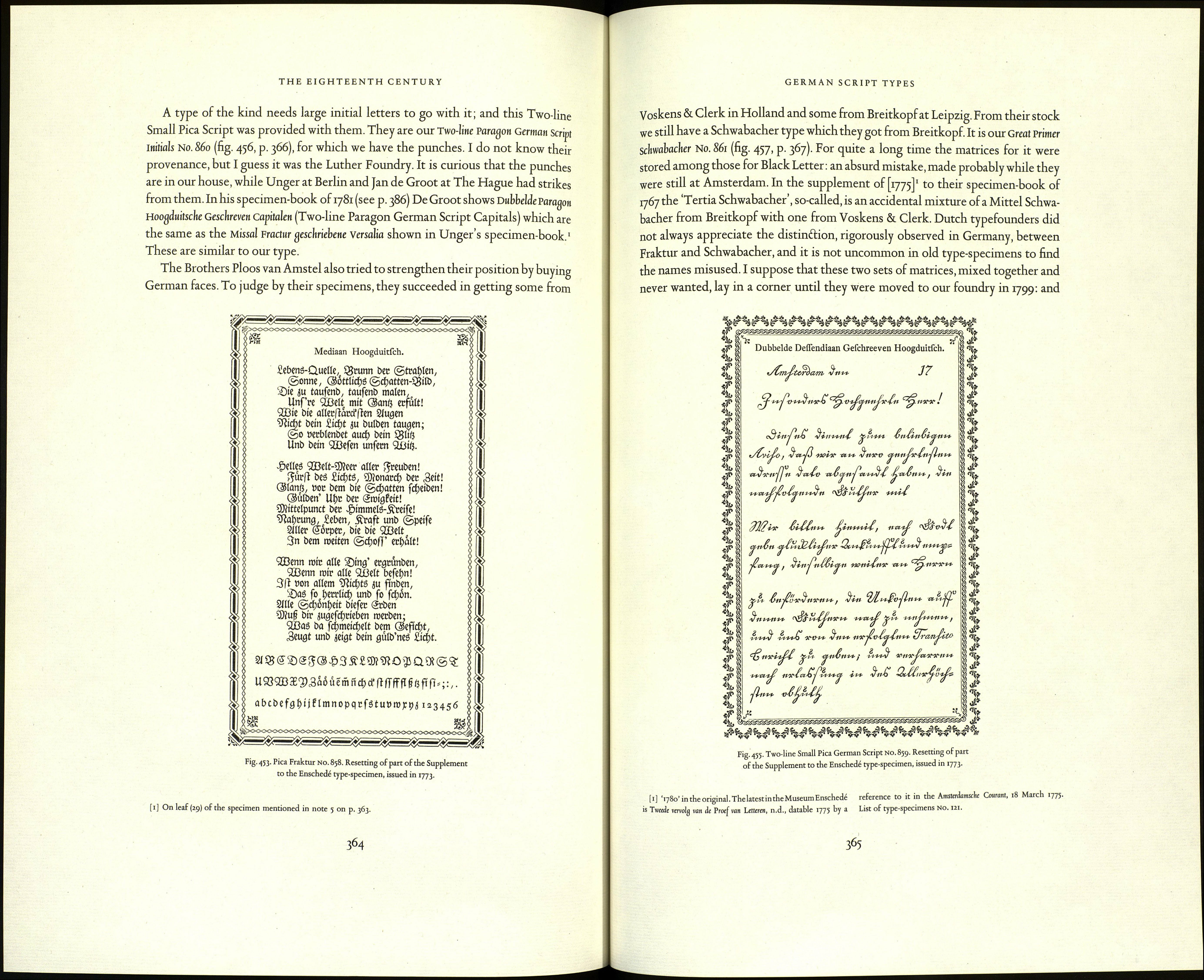 German vernacular types, though not a commercial necessity in Holland, could
not be neglected altogether in a typefoundry with pretensions to completeness.
Only Voskens & Clerk were well-equipped with them;1 but they were far behind
the times in the fashion of their Fraktur types by the middle of the eighteenth
century. It is no surprise to find Johannes Enschedé buying a set of matrices for a
pica Fraktur soon after he had issued his complete specimen-book in 1768. It is
now our Pica Frokur No. 858 (fig. 453, p. 364). He showed it in his supplementary
specimen-book of 1773.2

For a long time I believed (and asserted in the Gedenksclirift) that the matrices for
this face came from the Jewish typefounder, Willem Cupy (see p. 298). As a matter
of faci:, one of our old inventories included a Meâiaan Hoogduitscli (Pica 'German')
bought at the sale of his stock. But now I think the item in question must have
been a German Rabbinical type, given the common use among Jews of the name
Hooflduitsch ('German') for a kind of Rabbinical script unlike the normal Rashi of
of Spain, Portugal, and Italy. Cupy's collection of matrices was not large, and he
had very few for Roman and Italic: I think it likely that the type we got from
him is now our Pica German Rabbinical No. 64] (fig. 454), for which I can learn of no
other origin from our records.

In 1773 Enschedé bought a strike for a German script, now our Two-line Small Pica
German Script, N0.859 (%• 455> P- 3^5) ^n Germany3 and very probably from the Luther
Foundry at Frankfurt am Main, as I shall show on a later page (p. 368). It may have
been a publisher at Amsterdam, D. Swart, who drew my ancestor's attention to his
lack of type of this kind. When in 1771 Swart brought out a little Dutch-German
dictionary4 he had the script letters engraved in brass. In the specimen-book issued
shortly after 1798 by the typefounder Unger, of Berlin,5 a Text Sclirabsclm{t No. 1 is
shown, which resembles our Two-line Small Pica German Script No. S^.

[4] It has not been possible to identify a Dutch-German
dictionary printed by Swart. In 1772 a translation by E. Zeyde-
laar was published of the German grammar by J. С. Gottsched,
De Hoogduitsche Spicmbieester, printed by Steven van Esveldt in
Amsterdam. This edition contains a copper plate of German
script letters, as well as a brief discussion of the German script

form. This might well have provided Johannes Enschedé with
the incentive to buy German script types. The editor owes
this suggestion to Drs. С. de Wolf, The Hague, to whom her
thanks are due.