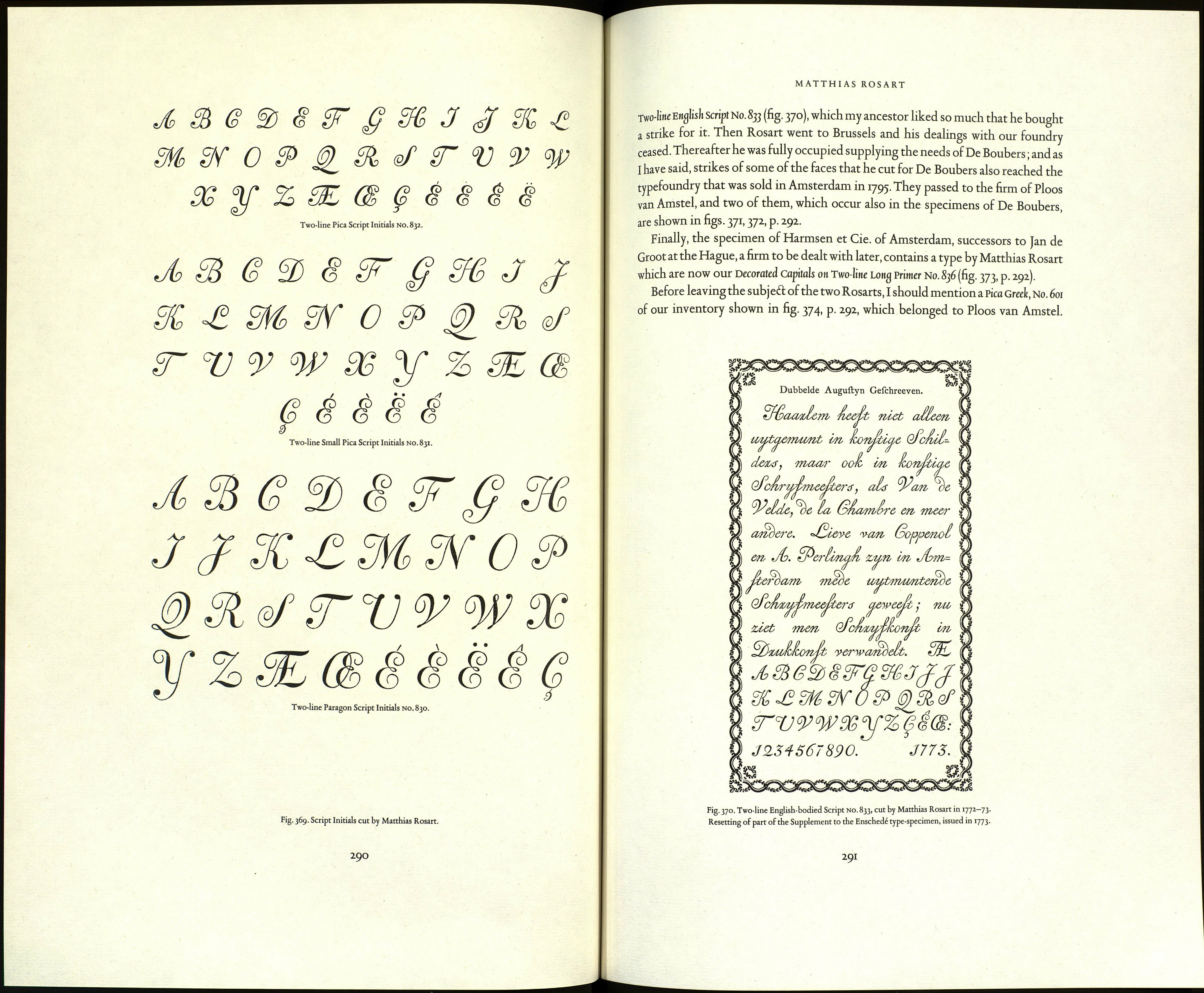 As I have already said, the elder Rosart thought it best to send his son away
from Brussels, and the letters exchanged by him and Enschedé show that Matthias
was living in Amsterdam in 1768 and for some years afterwards.1 At that time he
got in touch with Johannes Enschedé, who gave him in 1768 and probably once
more in 1769 trial orders for ornamented capitals, now our Two-line Pico Ornamenkà
Capitals No. 823 and Two-line Small Pica Ornamented Capitals No. 824 (fig. 364,365).

In 1769 [Matthias Rosart offered Enschedé to cut a shaded Roman of which he
gave prints of the two trial letters he had cut on his letter of 28 June 1769 from
Amsterdam.2 On 12 March 1771 punches and matrices for the 39 Two-line Small
Pica Shaded Capitals were delivered, and on 1 February 1772 the punches and the
matrices for the lower-case letters.3] The face so completed was put in the Enschedé
specimen-book of 1773 as КІеупе Canon Gescltaduuwde.the Two-line Pica shaded Roman N0.826
of our inventory (fig. 367). The capitals are now our Two-line Small Fica shaded Capitals
No. 825 (fig. 366). In 1770 he got Matthias Rosart to fill gaps in the series of Italic

[1] It may be assumed that Charles Enschedé did not realize Matthias Rosart's financial difficulties (letters of 28 April,

Johannes Franciscus) who was to visit his relations and friends the Museum Enschedé. There are no letters which warrant

daughter) who gave him sorrow (letter to Johannes Enschedé [2] See the preceding note.

dated 6 November 1764). Matthias was living at Amsterdam [3] This is to be found in the list of acquisitions of the

Brothers Ploos van Amstel wrote to Enschedé mentioning It is in the Museum Enschedé, CTV 318 a/2.

The satisfactory outcome of that order led to a commission from Enschedé
for script initials, now our Two-line Paragon Script initials No. 830 (fig. 369, p. 290) to replace
some cut by the elder Rosart for his Two-line Pica Script of 1753 (see pp. 260—261),
which my ancestor could never bring himself to like. These initials were followed by
two more sets to go with script types by Fleischman, Two-line Small Pica No. 831 and Two-
line Pica No. 832, for which Matthias Rosart sold Enschedé the punches (fig. 369, p. 290).

The younger Rosart was quite the equal of his father in skill. In 1772, when he
was on the point of going back to Brussels, he showed Enschedé the proof of

Fig. 367. Two-line Pica Shaded Roman no. 826, cut by Matthias Rosart. Resetting of
part of the Supplement to the Enschedé type-specimen, issued in 1773.