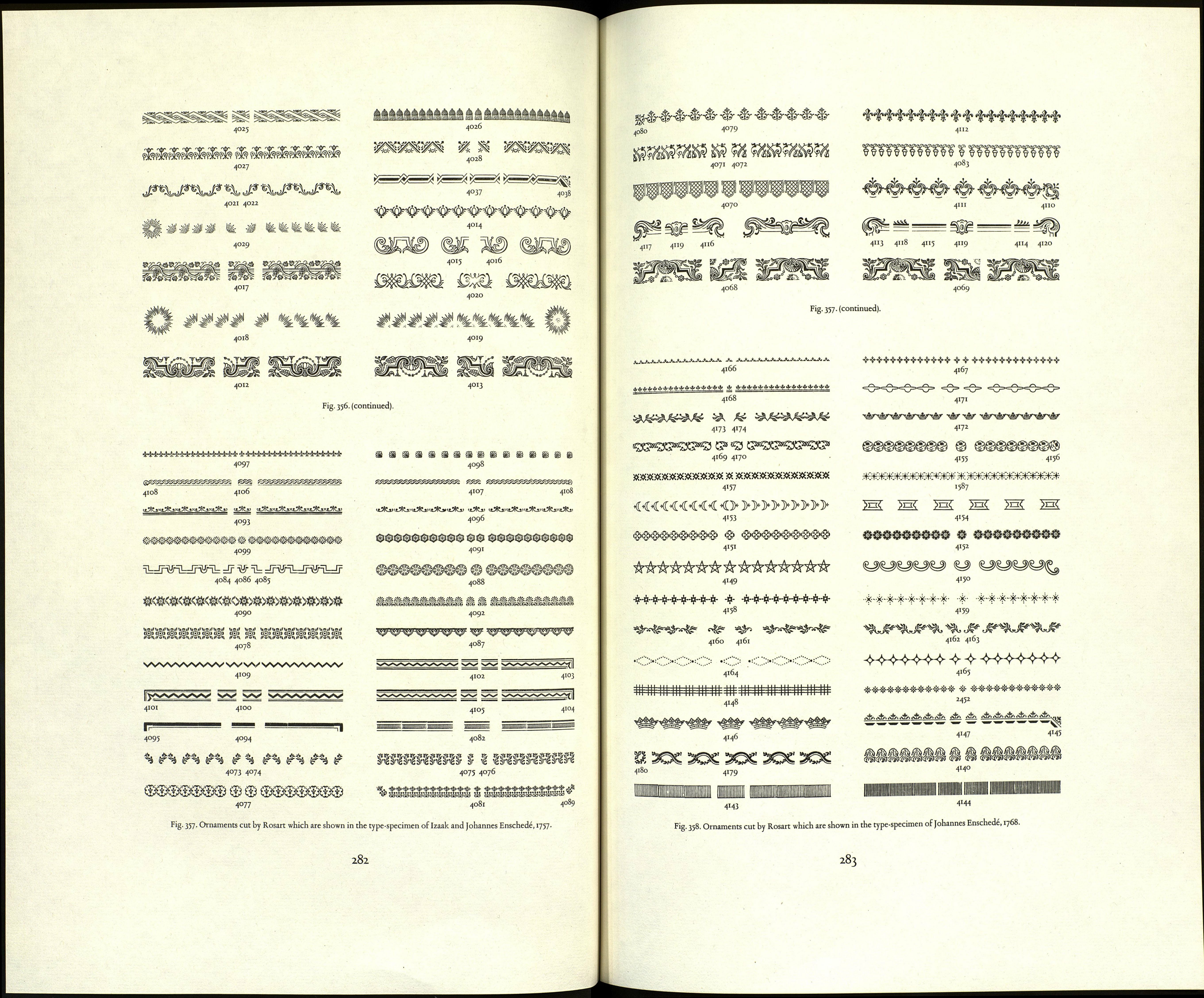 of life. The ordinary run of mankind likes to blacken those whom it cannot equal and add to
its dignity by depreciating uncommon gifts. The immortal name of J. F. Rosart has at last
emerged from the clouds: posterity, not less than contemporaries who regard him with admi¬
ration and regret, will raise its incorruptible voice to do adequate homage to his memory and
avow its gratitude at the sight of the achievement of this outstanding artist. It may hope for
successors to equal, though for none to surpass, him...

We shall not attempt a judgment on this matter, but will let others decide
whether Fleischman or Rosart should be rated the higher. Fortunately, we have
material enough by both to allow of an appreciation of their respective merits.

Rosart cut a great many flowers and ornaments. We still have nearly three hundred
matrices for them, and when I come to describe on a later page the eighteenth-
century material whose origin I have been unable to trace, we shall have to notice
many more which might be ascribed to Rosart or to his son, Matthias. " Those I have
left among the unclassified for lack of clear evidence. As a rule, Enschedé bought
only the matrices: Rosart kept the punches, and he sold strikes to more than one
typefounder in the Northern or the Southern Netherlands. The examples that
I give of his ornaments are grouped in chronological order as they appeared
in the specimen-books of Izaak and Johannes Enschedé, of the predecessors of
the Brothers Ploos van Amstel, and lastly, of the Widow Decellier (figs. 355—363,
pp. 281—287).

The typefoundry previously noticed as having been sold at Amsterdam in 1795
(see p. 275) was originally [J.-F. Rosart's]; but some of its later types were certainly
cut by Matthias Rosart.2 This man, though he had no connection with his father's
business, had learned to be a proficient punchcutter, and working in Brussels,
had made a range of Roman and Italic text-types and several sets of ornamented
capitals. He sold matrices of those to the typefoundry of J. L. de Boubers established
at Brussels 'at the foot of the Rue de la Magdalaine' until 1776 and later 'in the
Rue d'Assaut near the Ste Gudule'.3 Some of these types are also to be seen in
supplements to the specimen-book of Ploos van Amstel, who must have bought
them after 1795.4

[1] Matthias Rosart issued a specimen-book, Épreuves des
caraaères de la fonderie de Mathias Rosart. Brussels 1789. List of
type-specimens no. 136. This specimen contains a total of 231
flowers in various sizes. Not one of them is to be found
among those shown in fig. 519 on pp. 412-418. The copy
of Matthias's specimen-book which is in the library of the
Vereeniging ter bevordering van de belangen des Boekhandels
at Amsterdam is bound up with his Épreuves des tarotées de la fonderie
des caraaères de Mathias Rosart. A Bruxelles, Rue Neuve, 1789. (Speci¬
mens of the tarotés of the typefoundry of Matthias Rosart. At
Brussels, Rue Neuve, 1789). Tarotés are ornaments for printing
the back of playing-cards.

[2] Since it is known that it was J.-F. Rosart's typefoundry
which was put up to auction, it is not at all likely that it
contained material cut by Matthias.

[4] There are no typefaces by Matthias Rosart in the Bj-
vaeasel issued by the Ploos van Amstel Foundry (see List of
type-specimens No. 142).

Fig. 355- Ornaments cut by Rosart which are shown in the type-specimen of Izaak and Johannes Enschedé, 1744.