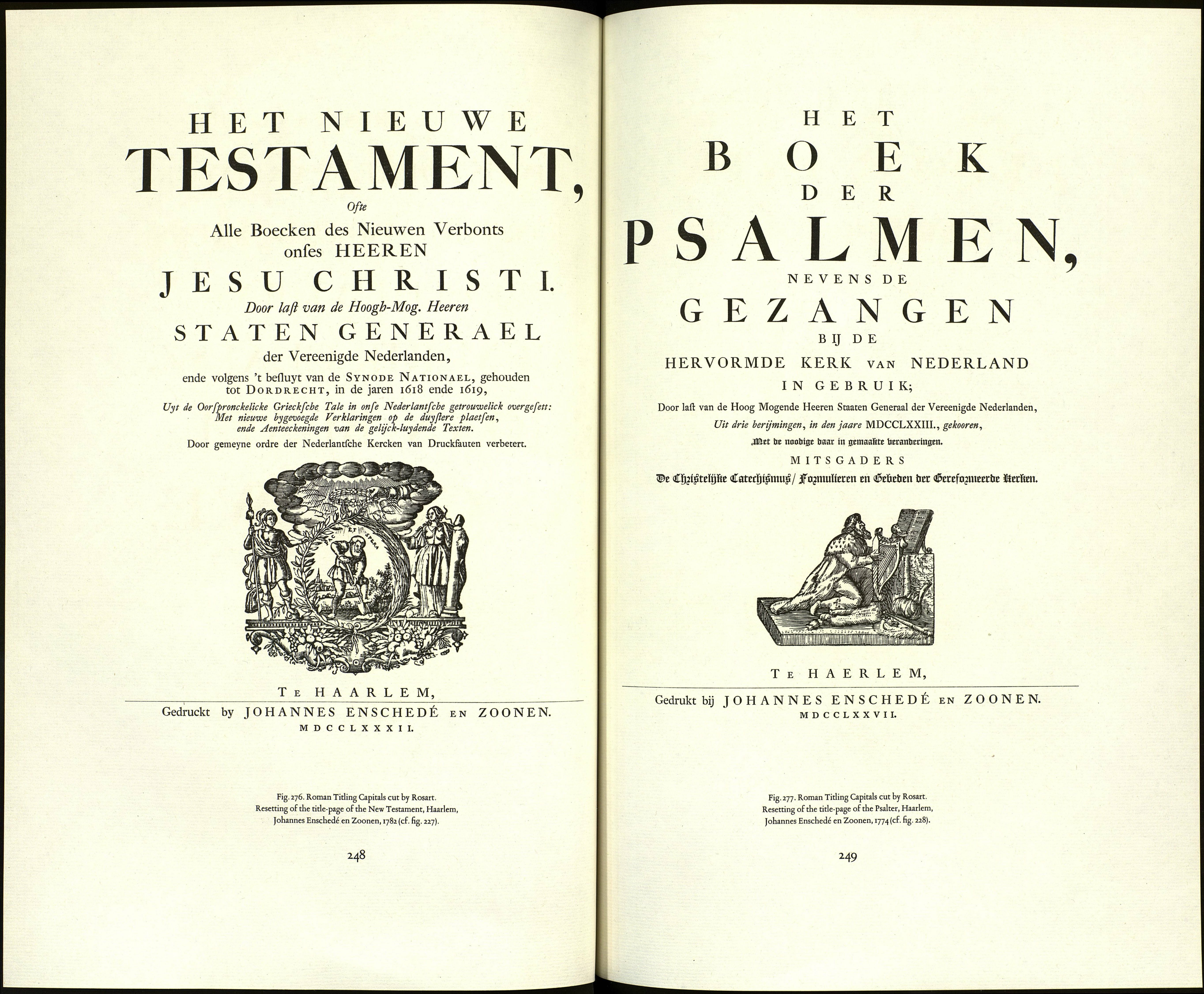 where he had bought a house on 2 October 1740]. Very soon he issued a specimen1
which made it plain that he still had much to learn in the matter of cutting punches.
[At the beginning of] 1742 he produced a new edition of his specimen with some
additions.2 Not surprisingly he had but small success, and he looked for a way of
supplementing his income. (J¿ On 13 March 1743 his request for the permission to
set up a printing office in Haarlem, for his admittance as a member of the printer's
guild, and for being excused from serving on apprenticeship, was rejected. He then
seems to have decided to become an apprentice for J) on 26 March 1743 he was ad¬
mitted to the printer's guild as a journeyman. For some reason, however, he never
worked at that trade, but persevered in his typefounding.

The opening of Enschedé's foundry in 1743 was a grievous blow of fortune for
Rosart, though it meant that he gained a customer for punches and matrices. Even
those he had to make to suit the taste of a customer who had ample opportunities
for comparing their workmanship with that of his own punchcutter. It was a diffi¬
cult relationship. Enschedé thought poorly of Rosart's specimen. The latter was
well aware that to sell his work he must cut punches at least as good as Fleischman's
and that he had an uphill road ahead of him.
Enschedé's Enschedé, as I said, was insistent on having his specimens set wholly in types

from Rosart cast m matrjces 0f hiS own. Therefore he had to order some for headings, and not
liking any of those that Rosart could offer, he commissioned new ones. They were
supplemented with eleven punches and matrices for Greek. They are now our
Two-line Pica Roman Titling Captais N0.775 and Gre^ No. 777, and Two-line Great Vrimer Roman
Titling capitals No. yj6 and Greek No. yj8 (figs. 273—275). And in 1744 he ordered from
Rosart more titling capitals. They are the Two-line [Large] Enajislt-bodied Roman Titling
Capitals No. 779, the Four-line Small Pica Roman Titling Capitals No. j8o, and the Four-line [Larff]

[1] Proef von Ietterei,... J. F. Rosar [sic], Haarlem. This specimen dated 1742, for there is an advertisement in the Oprerlite

(1742). List of type-specimens no. 71. This specimen can be present specimen displays.

English-bodied Roman Titling Capitals No. 781 of our inventory (fig. 275). The last of these
was in faci: in Rosart's specimen, differing in only a few of the letters from
Enschedé's.1 Of the three only the biggest has numerals, and these were most
likely cut later by Rosart's son, Matthias (see p. 280). I have reset some title-pages
of books printed by Enschedé to give an idea of the use that he made of these
titling capitals (figs. 276—278, pp. 248—250),

In 1744, after issuing his first ociavo specimen-book,2 Enschedé felt the need for
Roman and Italic types on large bodies. He accepted the Two-line Great Primer
Italic as it was in Rosart's specimen, with a few necessary modifications, but he
thought the Roman that went with it not good enough. So he agreed to buy matrices
for the Italic on condition that Rosart would cut him a new Roman. On these terms

[1] In Rosart's specimen of (1742) the А В D E headed the word carractères in the heading are shown.
Pousse capitulen (Four-line Great Primer titling capitals) and [2] See List of type-specimens no. 78.