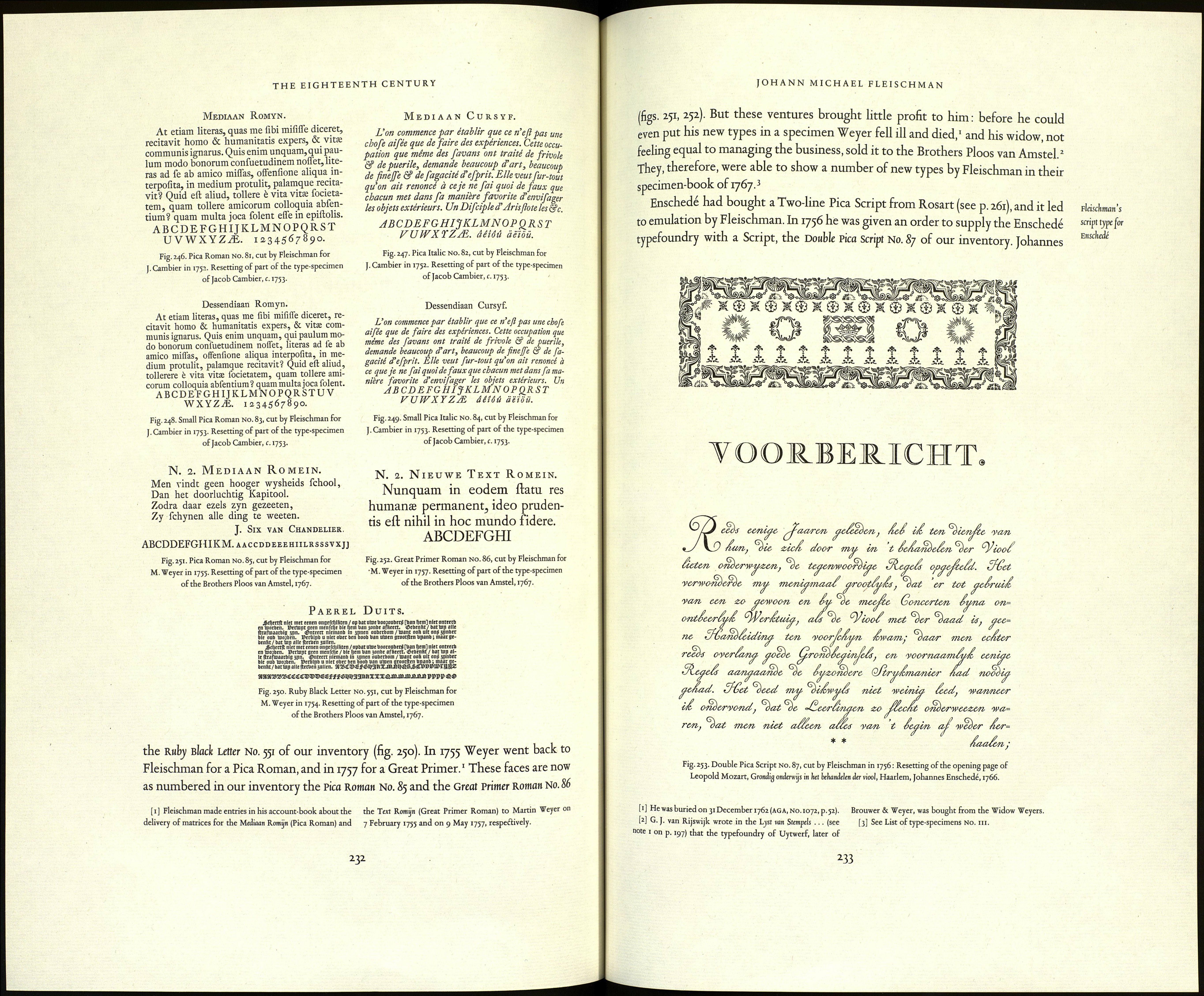 p. 232). ' Cambier also bought a type from Rosart (see pp. 254-255). However, these
acquisitions were not enough to arrest the decline ofthe concern. The typefoundry
and the printing business were put up to auction [in 1755].2 For another twelve
years the purchasers of the typefoundry, Jan Roman & Company,3 tried to keep
their heads above water; but they failed, and the stock had to be sold. So it was that
Ploos van Amstel and Enschedé, as I said before (see p. 89), came to buy this material

[1] This appears from undated entries in Fleischman's J. С. В. (which stands for JaCoB as well as for J. CamBier).
account-book (Haarlem, Museum Enschedé, стѵ 298^ to This specimen (incipit: Grote Kanon Romeyn) also shows a
which he added the dates of payment, 3 November 1752, 20 Two-line Great Primer Roman and Italic, and a Small Patagón
March 1753,11 September 1753, and January 1754. These types Roman, which are attributable to J. F. Rosart. See List of type-
appear in the specimen in which the foot-note added to them specimens no. 89.
and stating that they were all cut in the year 1753 is signed [2] See p. 88.

and divide it between them. Fleischman's Pica went to Ploos and the Small Pica to
Enschedé.

The typefoundry of Hermanus Uytwerf passed to the firm of Brouwer & Weyer,
probably about 1750. * By 1754 Brouwer had withdrawn,2 leaving Martin Weyer as
sole proprietor. In that year Weyer ordered a Ruby Black Letter from Fleischman.3
It is an admirably even-coloured face, and it soon became a favourite. It is now

Fig. 242. Two-line English-bodied Black Letter no. 564, cut by Fleischman in 1749.
Resetting of a page ofthe type-specimen of Izaak and Johannes Enschedé, 1748.

[1] See note 3 on p. 196, and Wan Eeghen 4, p. 149. There
are two specimens by Brouwer & Weyer in the Museum
Enschedé : one of Romans and Italics, which is headed Letter-
protf van âegieterye van Brouwer en Weyer, the other of titling capitals
and headed Proef van capitalen, die gegooten werden op de gietery van
[name cut out which would have been Brouwer enj Weyer tot
Amsterdam (Specimen of capitals which are cast in the foundry

[2] Charles Enschedé wrote that Brouwer had either died
or withdrawn. Dr. van Eeghen describes under what circum¬
stances Weyer cancelled the contrail: with Brouwer on 30 July
1754. See Van Eeghen 5, Lettergieterijen.

[3] This is not to be found in Fleischman's account-book.