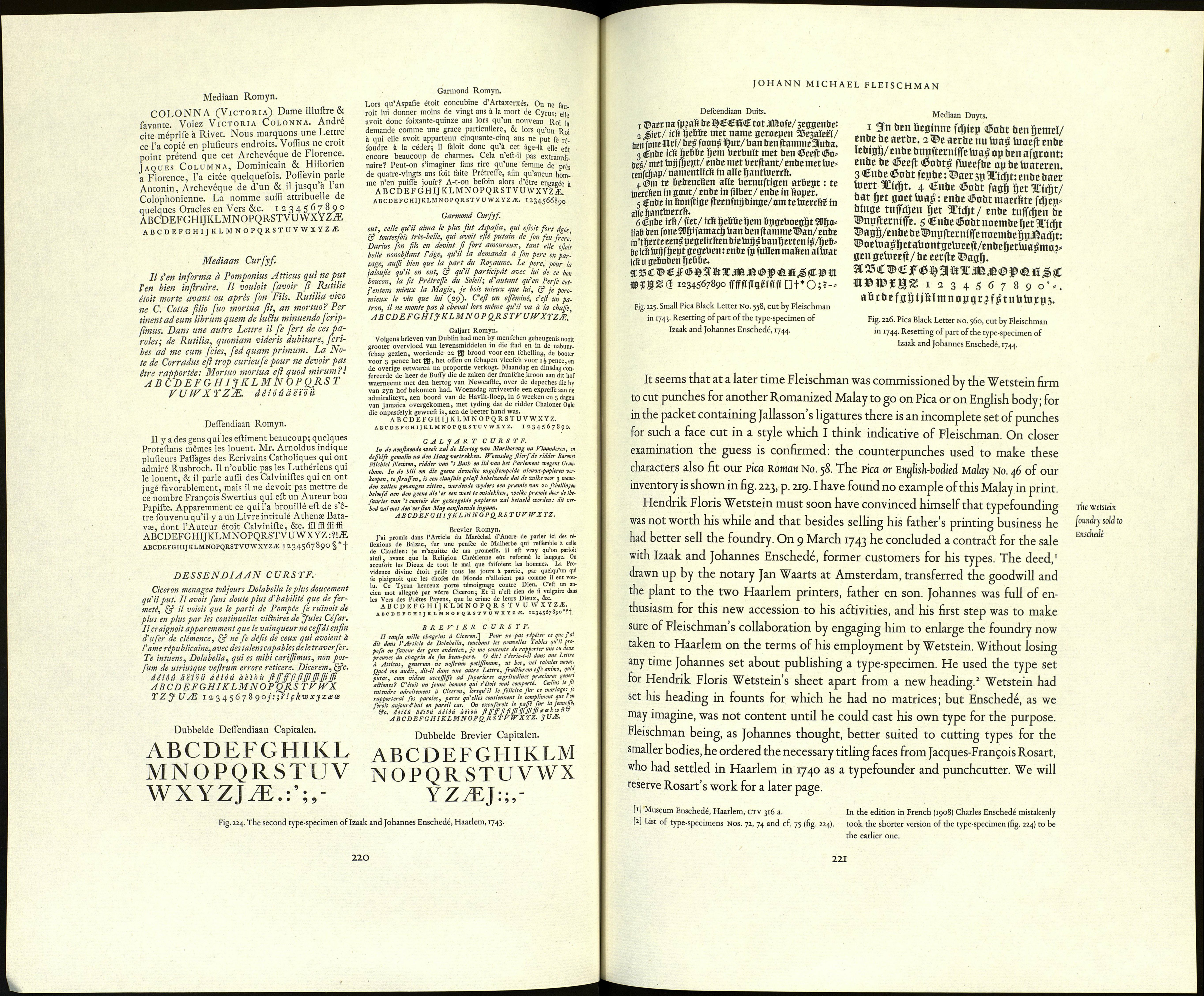 Here it may be remarked that carelessness in the editing and setting of early
type specimens, not merely the printer's errors but the typefounder's too are quite
common. In the Wetstein specimen of 1740 a Goljart Romyn (fig. 175, p. 201), a Grote
Brevier Romyn, a Brevier Romyn. and a Brevier cursy[(fig. 192, p. 208) are shown.

The Galjart (Bourgeois) and the Grote Brevier (Large Brevier) are the same face cast
on différent bodies, but it is not shown cast on its proper Brevier body. The Roman
headed Brevier Romyn (Brevier) is a Minion face. These three Roman faces are accom¬
panied by an Italic cast on Brevier which Fleischman intended for Minion body.
The collonel Romyn (Minion Roman), however, is not accompanied by this Italic cast
on Minion. The Roman and Italic headed Nomparel (Nonpareil) are cast on Ruby.

The specimen issued by Hendrik Floris Wetstein also has mistakes in it. He
may have noticed that the Minion Roman (see fig. 177, p. 201) in the previous speci¬
men was coupled with an Italic that was too small (see fig. 189, p. 208) and that this
Italic would not work with the Nonpareil Roman either. It is likely that he got
Fleischman to cut a new Nonpareil Italic (see fig. 193, p. 208) in 1738, which he mated
with the corresponding and the Minion Roman without having noticed that he
already had a Minion Italic but had cast it on a Brevier body. Proper care was
certainly not taken over his specimens.

Strangely enough, Enschedé repeated these mistakes when he put the types in
his own specimens, and it was not until 1806 that these particular Italics were given
their true designations.

In his specimen Hendrik Floris Wetstein put types for Romanized Malay.1
These are as numbered in our inventory English-bodied Malay No. 72 and Brevier Malay
N0.73. One Jallasson2 had cut the necessary ligatured and accented sorts (figs. 221,
222). This man had been for a time a printer in London, and had printed among
other things a Hebrew Bible in types that he had cut. He did not prosper in his
trade and had to seek his fortune elsewhere ; so he moved to Amsterdam, where he
claimed to have invented a way of making faces of type for six different bodies
with three sets of punches. Whether there was anything of real value in the in¬
vention I cannot say. However, nothing seems to have come of it. In 1730 we find
Jallasson working for Wetstein, cutting the two sets of special sorts for a catechism
in Malay3 and a big Bible in two volumes. The New Testament came out in 1731 and
the Old Testament in 1733, both printed by Rudolph and Gerard Wetstein for the
Dutch East Indies Company.

m a à b Б dggjkklnpftwzHiffi

chaiafters, both with extra sorts needed for it. specius for the catechism, in which they used the English-

[2] According to John Smith's Printers' Grammar Jallasson was bodied Malay no. 72. It is in the Museum Enschedé at