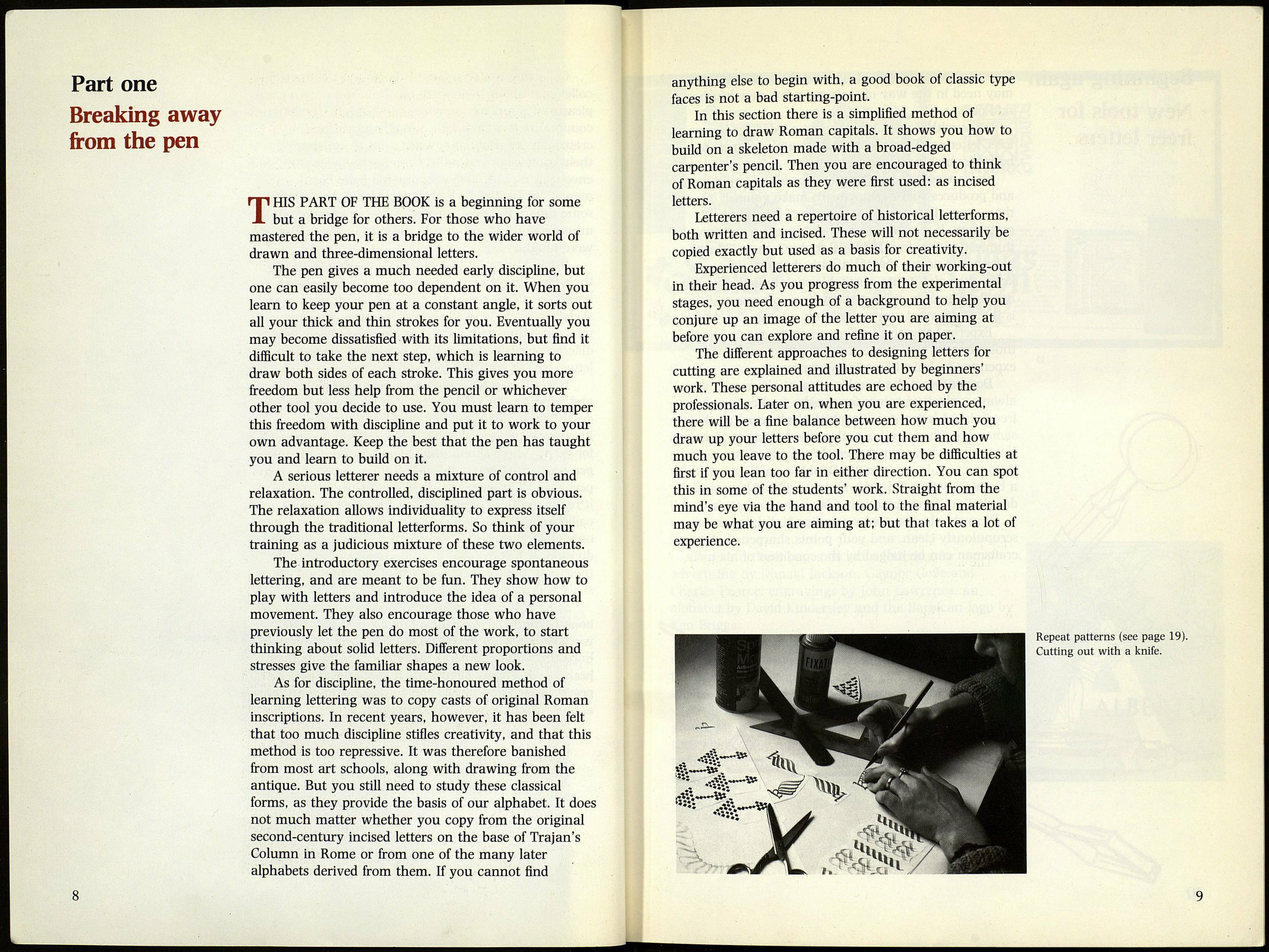 Breaking away
from the pen

THIS PART OF THE BOOK is a beginning for some
but a bridge for others. For those who have
mastered the pen, it is a bridge to the wider world of
drawn and three-dimensional letters.

The pen gives a much needed early discipline, but
one can easily become too dependent on it. When you
learn to keep your pen at a constant angle, it sorts out
all your thick and thin strokes for you. Eventually you
may become dissatisfied with its limitations, but find it
difficult to take the next step, which is learning to
draw both sides of each stroke. This gives you more
freedom but less help from the pencil or whichever
other tool you decide to use. You must learn to temper
this freedom with discipline and put it to work to your
own advantage. Keep the best that the pen has taught
you and learn to build on it.

A serious letterer needs a mixture of control and
relaxation. The controlled, disciplined part is obvious.
The relaxation allows individuality to express itself
through the traditional letterforms. So think of your
training as a judicious mixture of these two elements.

The introductory exercises encourage spontaneous
lettering, and are meant to be fun. They show how to
play with letters and introduce the idea of a personal
movement. They also encourage those who have
previously let the pen do most of the work, to start
thinking about solid letters. Different proportions and
stresses give the familiar shapes a new look.

As for discipline, the time-honoured method of
learning lettering was to copy casts of original Roman
inscriptions. In recent years, however, it has been felt
that too much discipline stifles creativity, and that this
method is too repressive. It was therefore banished
from most art schools, along with drawing from the
antique. But you still need to study these classical
forms, as they provide the basis of our alphabet. It does
not much matter whether you copy from the original
second-century incised letters on the base of Trajan's
Column in Rome or from one of the many later
alphabets derived from them. If you cannot find

anything else to begin with, a good book of classic type
faces is not a bad starting-point.

In this section there is a simplified method of
learning to draw Roman capitals. It shows you how to
build on a skeleton made with a broad-edged
carpenter's pencil. Then you are encouraged to think
of Roman capitals as they were first used: as incised
letters.

Letterers need a repertoire of historical letterforms,
both written and incised. These will not necessarily be
copied exactly but used as a basis for creativity.

Experienced letterers do much of their working-out
in their head. As you progress from the experimental
stages, you need enough of a background to help you
conjure up an image of the letter you are aiming at
before you can explore and refine it on paper.

The different approaches to designing letters for
cutting are explained and illustrated by beginners'
work. These personal attitudes are echoed by the
professionals. Later on, when you are experienced,
there will be a fine balance between how much you
draw up your letters before you cut them and how
much you leave to the tool. There may be difficulties at
first if you lean too far in either direction. You can spot
this in some of the students' work. Straight from the
mind's eye via the hand and tool to the final material
may be what you are aiming at; but that takes a lot of
experience.