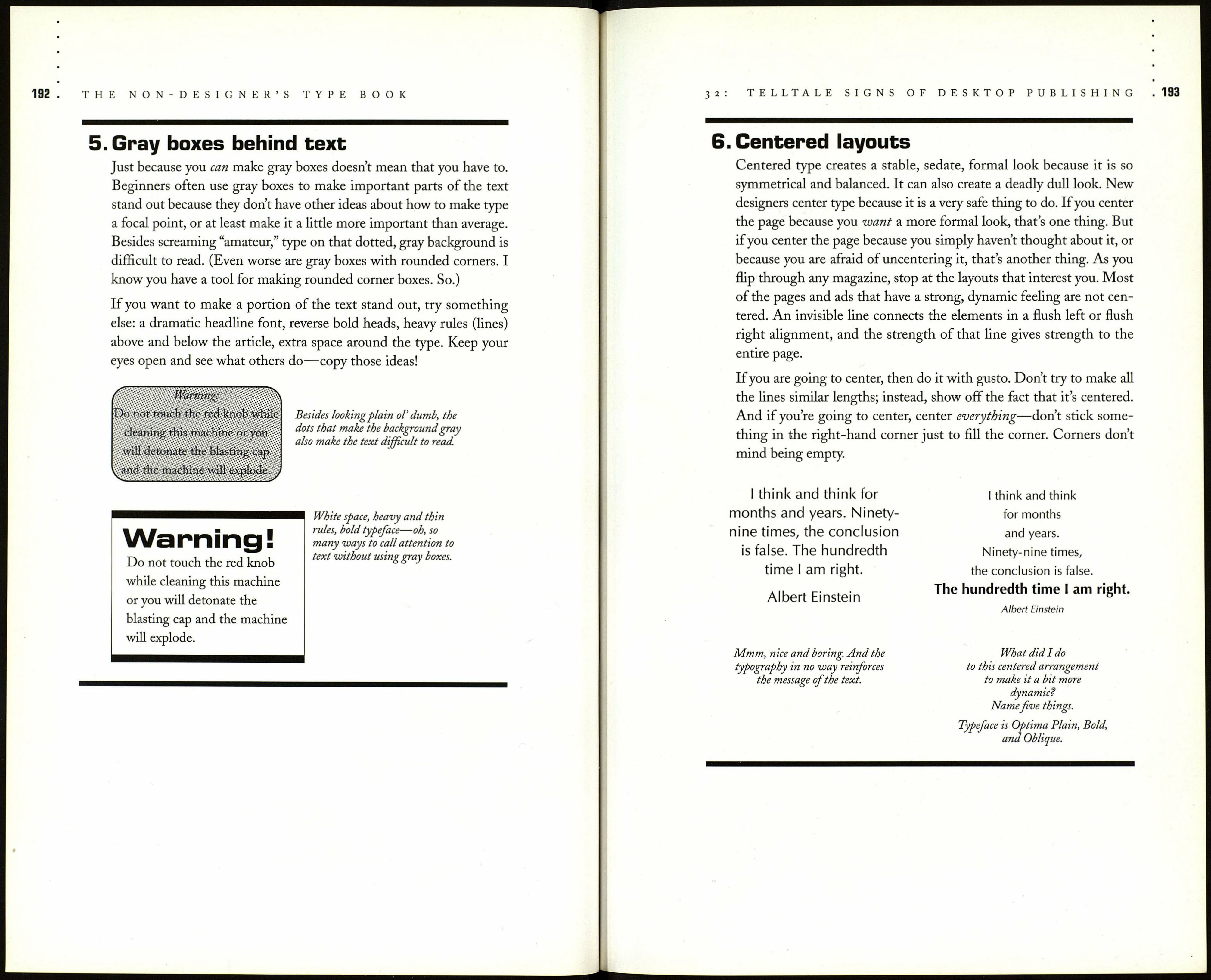 Type has trends, just like hair styles and clothing and eyeglasses and
architecture. Helvetica was the most popular typeface in the world in
the '60s, and in the '70s it was a way of life. By the '80s Helvetica was
becoming as passé as beehive hairdos and then it appeared in the
Macintosh font menu and then in the PC font menu. Just as a beehive
hairdo creates a certain look, Helvetica creates a certain look. A dated
look. A 70s look. Just because it's on your computer doesn't mean you
have to use it. The greatest thing you could do for your publications
is to invest in another sans serif face, one with a strong, bold black
version in its family. As with all trends, Helvetica will someday be
back in style—in about two hundred years.

It is amazing that after all these years people are still typing straight
quotes. Learn the keystrokes to type real quotes, and in every appli¬
cation you use, take advantage of the feature that types them for you
automatically (read your manual!). But don't type curly quotes when
you need inch and foot marks (in fact, use prime marks; remember
Chapter 4)! And don't type an opening quote at the beginning of a
word that really needs an apostrophe! And put the quotation marks
and apostrophes in the right place!

"Can you believe
that dog stands
ТУ tall? Its huge!"

Notice the prime marks for the numbers,
and the quotation marks are hanging!

Hitting the Return or Enter key twice between paragraphs or after
headlines separates the text with big, awkward gaps. Double Returns
also make it possible to end up with a blank Une at the top of a column.

Learn to use "Paragraph space after" and the "Paragraph space before"
feature—it's in every program that uses lots of text. With that feature
you can determine exactly the amount of space you want between
paragraphs, after headlines, above subheads—an elegant space that
tells the reader a new paragraph has begun without physically separat¬
ing the text so much.

Notice the difference between these three paragraphs and the rest of
the paragraphs in the book—wouldn't you agree that the gap appears
unnecessarily large?

I know, I know—if you are still typing two spaces after periods it is
probably because you firmly believe it looks better that way. If all the
work you create is for yourself, go ahead and continue to type two
spaces. But you would be doing your clients a disservice to set their
type with two spaces after periods because by now most people have
become visually astute enough to notice the unsightly gaps created
by that double space. Publications typed with two spaces have an
unprofessional appearance, whether you agree with it or not, and your
work will be ridiculed. Open any novel on your shelf—see any double
spaces? Did you read that novel and complain to yourself that you
couldn't tell where the sentences ended? The high-quality type you
are using, with its proportional widths and kerning pairs that tuck the
letters so close together, does not need two spaces to separate sentences.
Squint at this paragraph—notice any holes?