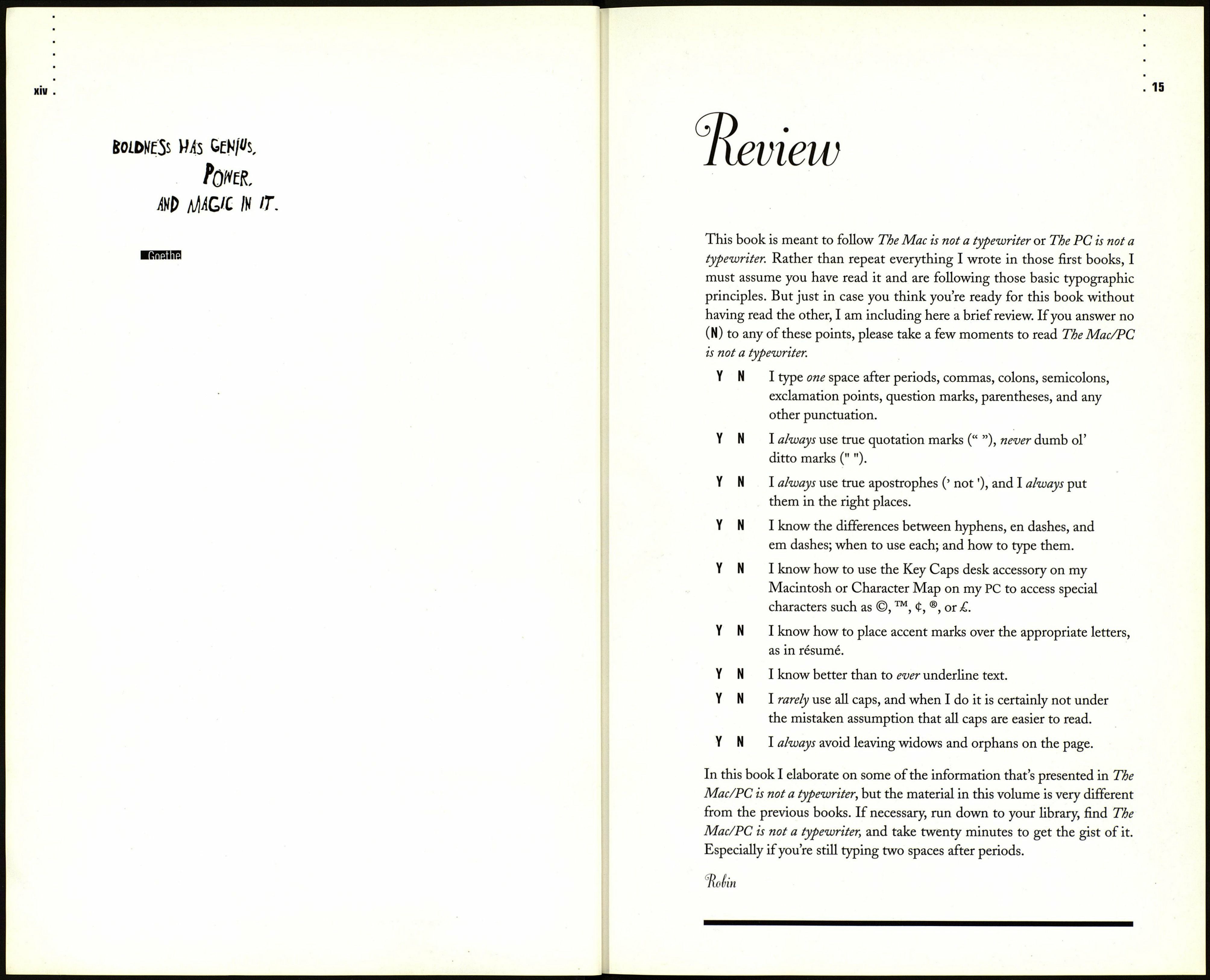 Glance quickly at the two quotations set below, and be conscious of your
instant reaction as to which one has a more sophisticated appearance. Then
look more closely at the one on the left, and see how many details you can
pinpoint that contribute to its unprofessional appearance. Then look care¬
fully at the quotation on the right, and see how many differences you
can spot. Each of those differences helps to create the cleaner and more
sophisticated appeal of the second quotation setting.

"Human society, the world, man
in his entirety is in the alphabet.
The alphabet is a source...first
comes the house of man and its
construction, then the human
body, its build and deformities;
then justice, music, the church;
war, harvest, geometry; the
mountain, nomadic life and se¬
cluded life, astronomy, toil and
rest; the horse and the snake; the
hammer and the urn which—
turned over and struck—makes a
bell; trees, rivers, roads; and fi¬
nally destiny and God.

"Human society, the world, man in
his entirety is in the alphabet. The
alphabet is a source ... first comes
the house of man and its construction,
then the human body, its build and
deformities; then justice, music, the
church; war, harvest, geometry; the
mountain, nomadic life and secluded
life, astronomy, toil and rest; the horse
and the snake; the hammer and the
urn which—turned over and struck—
makes a bell; trees, rivers, roads; and
finally destiny and God.

"That is what the alphabet signifies."

The 12-point type is large and clunky.

The 10-point type is easier to read
because you can see entire phrases, plus
it has a more sophisticated look. (p. 195)

The line length is too short to justify the
size of the text, creating uneven word
spacing and too many hyphenated words.

Setting the type flush left instead of
justified ensures that there is even
spacing between the words, (pp. 38,119)

The quote marks are ditto marks, not
true quotation marks. And the first
"quote" mark makes the text appear
to indent in the first line.

The quotation marks are true quote
marks, and the first one is hung into
the margin, eliminating the appearance
of an indent, (pp. 53, 57)

The computer ellipsis (...) is too tight.

The ellipsis is set with thin spaces and
periods for more elegant spacing, (pp.66-67)

Double-hyphens are used instead of
em dashes.

Em dashes are used instead of double
hyphens, (p. 68)

The paragraph space is created by hitting
two Returns, making much too much
space between paragraphs.

There are two-letter hyphenations.
And the last paragraph has the worst
sort of widow (a hyphenated last word).

Hyphenations have been eliminated,
(p. 144)

There is a hyphen between the dates
instead of an en dash.

Oldstyle figures are used for the dates,
separated by an en dash. The en dash is
given a baseline shift downward, (p. 72)

The small caps are computer generated,
creating a discrepancy between the
stroke weights of the small caps and
those of the other letters and the capital.

The byline (Victor Hugo) is italic,
so the comma after his name should
also be italic, not roman, (p. 67)

Technically, the phrase does not need quotation
marks around it, but I wanted to display them.
When more than one paragraph is quoted, the
proper convention is to place quotation marks at
the beginning of each paragraph, but only at
the end of the last paragraph.

Swash characters were used for the first
letters of Victor Hugo's name. These are
not only a subtle visual pleasure, but also
prevent the italic V from bumping into
the dot on the lowercase i. (p. 147)