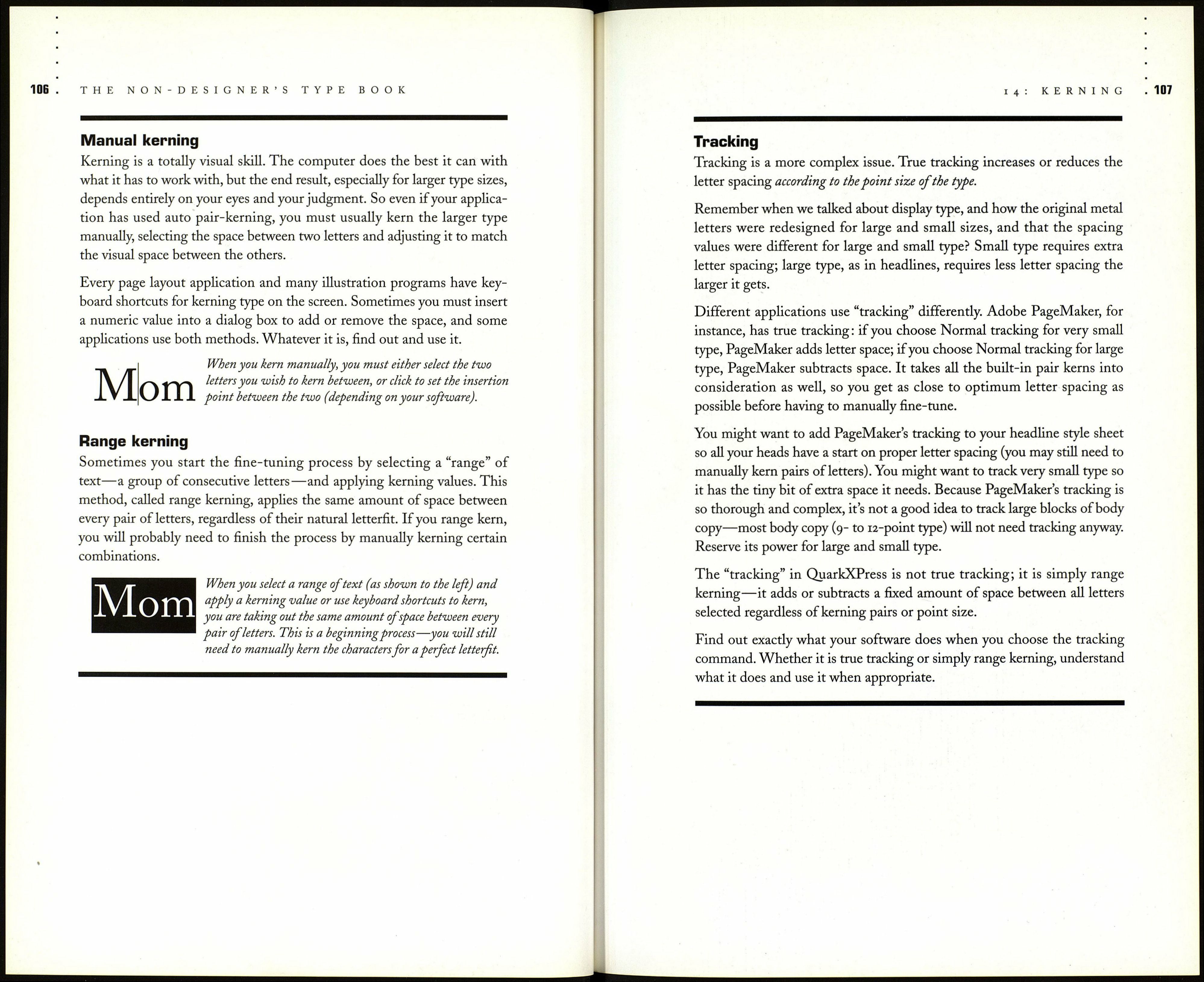 Until the 1970s, type was set in metal. Some machines set entire lines of
type on metal slugs, but many machines followed the older style of using
individual pieces. Regardless of the particular method, every character had
its own separate metal space. If each letter is on its own piece of lead, then
the letters can only get so close to each other—it's simply not physically
possible to move them closer without taking a knife and shearing off some
of the lead, thereby making that character useless for further typesetting.
In lines of metal type, you couldn't even do that much. In those days,
designers had to cut apart the proof sheets of type and move the printed
letters around to adjust their spacing, then glue them down. If you look at
an old magazine, you can instantly tell it's old, right? One of the visual
clues that tells you it's old is the loose letter spacing, looser than you are
accustomed to reading now that type is being set electronically.

Letter spacing is not really kerning, but refers to a general and
arbitrary adjustment of the space between characters in a large
piece of text, whereas kerning is a form of individual letter
spacing. You might want to add more letter space to open the
look of a typeface, or to create a dramatic headline that
stretches across the page. You might want to decrease the letter
spacing of a script face so the connectors reach the following
letters. Notice the very open (too open) letter spacing of this
paragraph. It's rather annoying in this case, isn't it?

Whew. This is better. PageMaker's letter spacing values are based on the
value the designer built into the font, and they are paragraph-specific so
you can adjust the letter spacing appropriately according to the typeface
and size and purpose. In QuarkXPress all you can do is change the "track¬
ing" value, which merely adds or subtracts an arbitrary amount between
all characters.

Most fonts have "kerning pairs" built into them. That is, as designers create
fonts, they build in tighter spacing between certain pairs of letters that are
known to cause inconsistent gaps, such as Та, To, Yo, we, and many others.
Not all fonts have kerning pairs built in, and some have poorly adjusted
pairs. Some fonts have 200-300 kerning pairs, others have over a thousand.
Just because a font has an extraordinary number of kerning pairs does not
mean it's better. In fact, when there are thousands of pairs it can take an
interminable length of time to display the text on the screen, and it will
also take longer to print.

Page layout applications usually have a checkbox that allows you to tell
your program to automatically take advantage of the kerning pairs, if you
are using a font that contains them. In most programs you can usually also
specify a point size above which the kerning pairs are automatically used.
It's neither necessary nor desirable to auto kern small sizes of type (less
than about 7 or 8 point) because when type is set small it should actually
have more space between characters, not less.

In the first example, no auto pair kerns have been used. In the
second example, the automatic kerning pairs have been used. You
can clearly see the difference, although in type this large you must
still do some manual kerning—auto pair kerning is just a start.
Look carefully to find where some manual kerning is needed.
How about between the capital "V" and the lowercase "e"?
The auto kerning brought them closer, but to make the spacing
consistent, the pair could still scoot together a wee bit more.