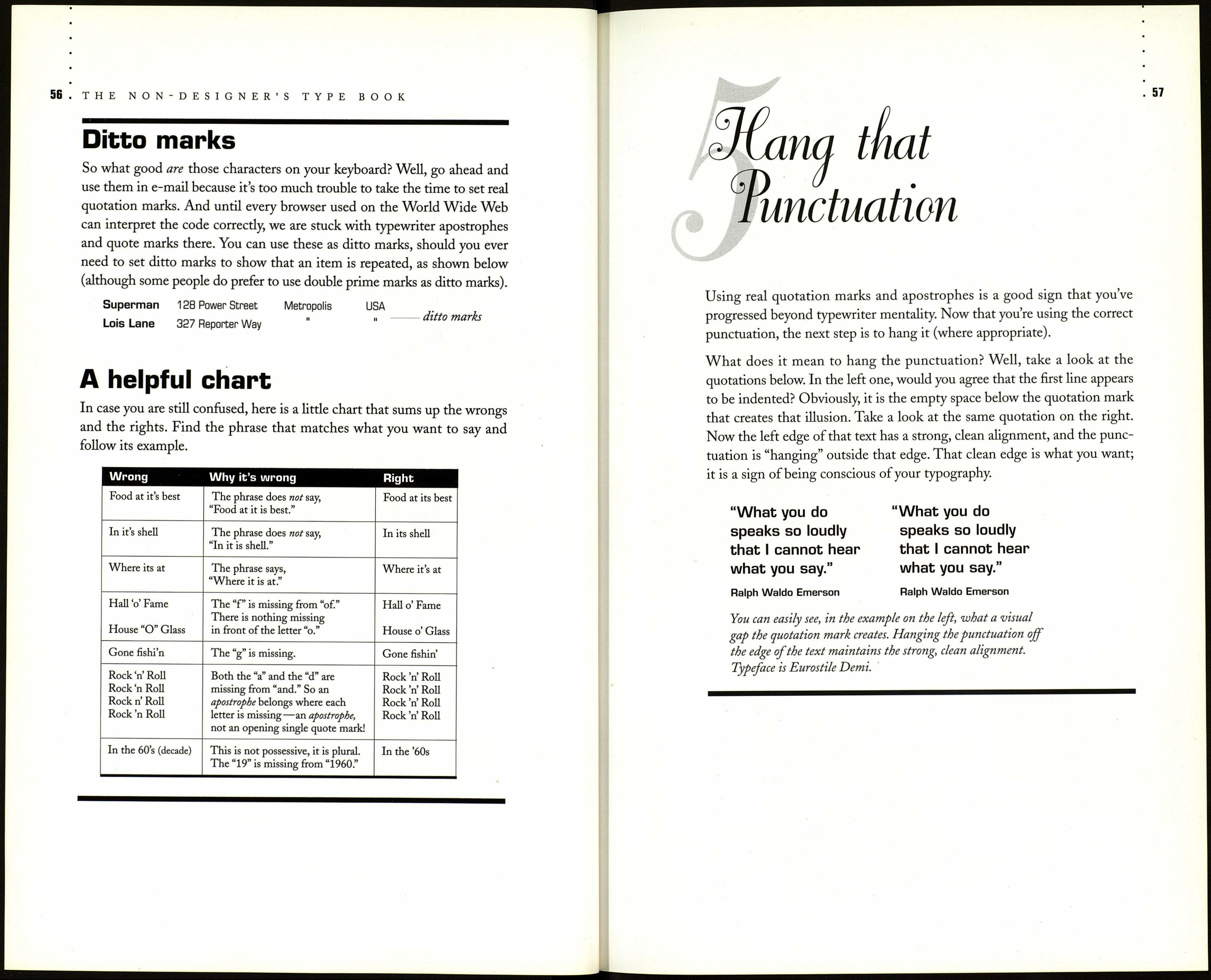 Follow these basic rules so your work doesn't look dumb:

* Quotation marks at the beginning of a word or sentence are
opening quote marks and curl toward the. text (" ).

Quotation marks at the end of a word or sentence are
closing quote marks and curl toward the text (").

* An apostrophe belongs where a letter is missing, as in
cookies 'n' cream or rock 'n' roll.

Notice your computer automatically inserts a backwards apostrophe
at the beginning of a word! For instance, your computer will do this:
cookies 'n' cream. This is wrong! And dumb!

Know the keyboard shortcut to insert the correct mark:
To type this: Mac Windows

* The word it's with an apostrophe means it is or it has. Always.
Really and truly always.

* When talking about decades, such as in the '90s, there is an
apostrophe where the other numbers are missing.

Make sure you set an apostrophe and not an opening single quote!
The phrase should not look like this: in the '90s, which is what you
will get if you let the computer type it for you.

Also notice there is no apostrophe before the s (not in the '90's,)

because generally you are referring to a plural number of years,
not a possessive number.

Another problem with letting your computer automatically type the
quotation marks for you is that you end up with quotation marks and
apostrophes when you really need inch and foot marks.

Now, you might think that you should be typing those ugly typewriter
apostrophes and quotation marks for inch and foot marks. Wrong, dear. In
excellent typography, feet and inches are represented by single and double
prime marks, which are at a slight angle, as shown below.

These are typewriter quote marks:
These are double and single prime marks:

If you have the Symbol font on your computer (which you probably do),
you can use the prime marks in it:

However, it's very possible that the prime marks in the Symbol font do not
match the weight of your characters. Until every font has prime marks built
in, you might often have to use the italic version of your typewriter apos¬
trophes or quotations marks, as shown below.

Technically, prime marks are not meant specifically as inch and foot marks,
but as markers of divisions of equal parts. For instance, you would also use
the single prime mark to show the minutes or degrees of an angle or a turn,
as in 120 8' (read 12 degrees and 8 minutes).