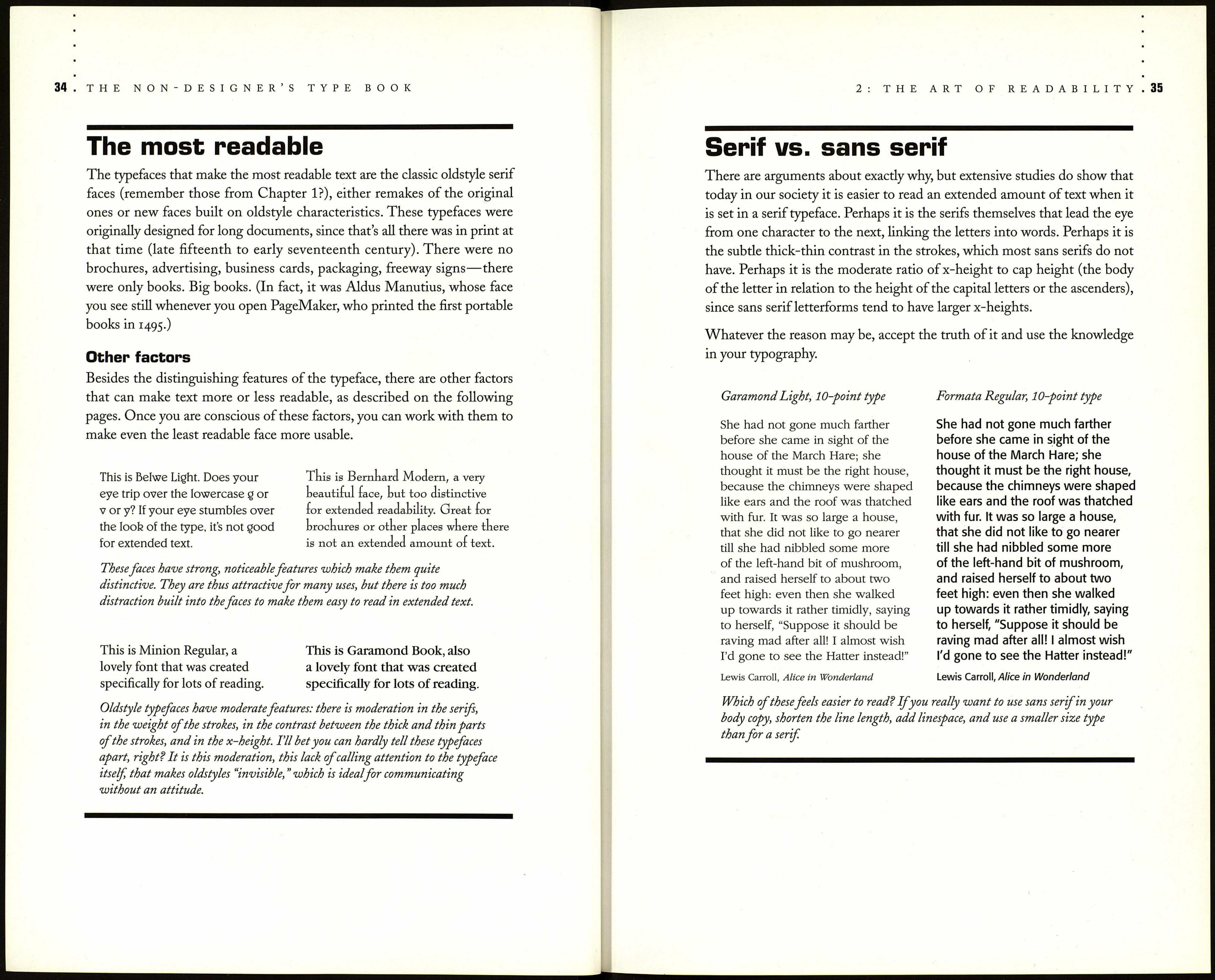 HERE ARE THOSE WHO CONTEND that Culture

alone dictates our reading preferences, and that
readability is based, not upon the intrinsic forms
of the characters, but upon what we are accustomed
to reading. Often cited as "proof" of this is the
German preference for blackletter that continued
centuries after the rest of the world had moved
on to more sensible typefaces. Without proposing
any scientific studies, I venture to suggest that just
because someone prefers a particular typeface does
not mean it is more readable. Your grandmother,
I am sure, preferred that you send her a handwritten
letter; in fact, she was probably offended if you wrote
her a letter on a typewriter. Even though your type¬
written letter would have been easier to read than
your handwriting, Grandma was not basing her
preference upon readability, but upon other, more
emotional responses. And I would propose that the
German preference for blackletter was not because
the letterforms were easier for them to read than
what the rest of the world was reading, but that they
had some other bonding with the blackletter forms.

Readability and legibility are two key elements of printed text that
typographers strive to maximize. Readability refers to whether an extended
amount of text—such as an article, book, or annual report—is easy to
read. Legibility (discussed in the next chapter) refers to whether a short
burst of text—such as a headline, catalog listing, or stop sign—is instantly
recognizable.

What makes a typeface readable?

There are several factors that determine whether text is readable. Most
typefaces are either high or low on the readability scale simply due to the
way they are designed. But a typesetter or designer can make any readable
face unreadable, and conversely they can improve the readability of any
face. It is your job to be conscious of both.

What makes a typeface intrinsically readable? Mostly it is a matter of
a moderation of features, an invisibility. That is, whenever a feature of a
typeface becomes noticeable, that face becomes slightly less readable. If a
typeface has a very distinctive lowercase g, so distinctive that it makes you
stop and say, "wow, look at that g," then it is lower on the readability scale.

Any part of the type that calls attention to itself—thick strokes, very thin
strokes, a strong contrast between the thick and thin strokes of a letter-
form, very tall and narrow forms, short and squatty forms, slanted
characters, fancy serifs, swashes, or other extreme features—lowers the
readability of the face because then you notice the letterforms rather than
the message.