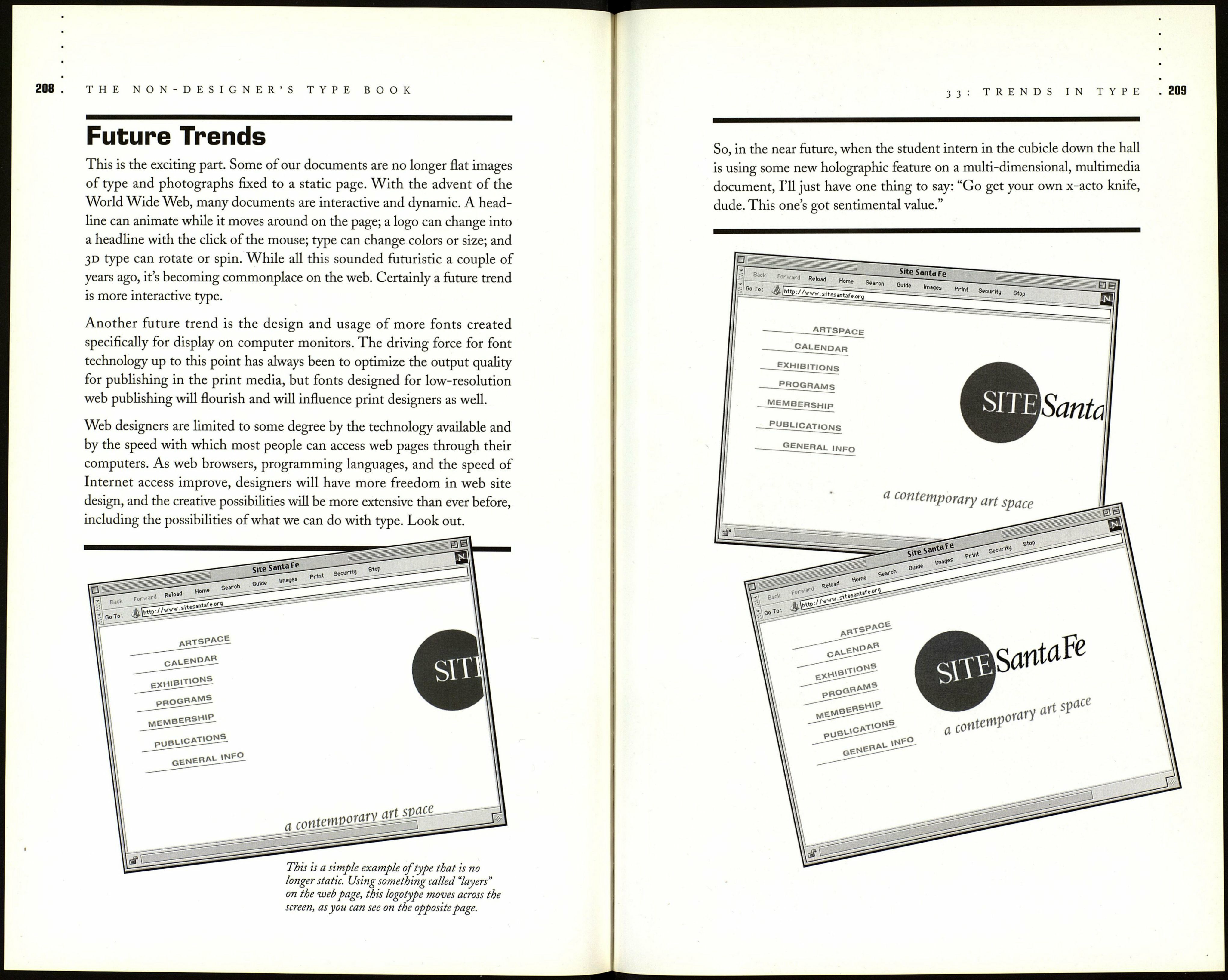 5. Most Fun Trend: Breaking the Rules

Breaking the rules of design. Big deal. "I do it everyday," you say. That's
partly because the rules are fairly subjective and trying to agree on exactly
what the rules are could cause a Holy Graphics War. Going out on a
graphic limb or out on a design ledge is pretty common, even encouraged.
The rules I'm talking about are the untouchable sacred cows of legibility
and readability. If there's one rule that I made sure I never broke, it was this
one: no matter how wild and unorthodox the design, you had to be able at
least to read the copy. Ah, those were the good old days. Fortunately, not
many designers are feeling compelled to carry their desktop creations this
far. But on the other hand, there are enough people pushing the conven¬
tional legibility envelope (even normal, well-adjusted designers) that I'm
proclaiming this an official recognizable trend. I know, I know. . . you're
probably saying, "I'll believe it's a trend when Robin Williams designs a
grungy type book." Oh, you poor, poor soul. You've got a lot of catching up
to do.*

* See A Blip in the continuum by Robin Williams, illustrated by John Tollett

In the past, our design choices were limited. First, our font choices were
limited to whatever choices our typesetter had made to include in her
library. Her choices were usually the most mainstream, commercially
acceptable, and popular font designs. Now, with the large commercial
libraries, freeware, and shareware (and all of them available online), our
choices are almost unlimited. If you think you're going to run out of
choices, you can create your own font design.

Next, we were limited by time and budgets. Okay, those limitations are still
there, but they've been minimized by our ability to experiment, create, and
produce typographic design on our computers for a fraction of the time
and money it used to take. The argument you still hear from the disappear¬
ing contingent of desktop critics is that computers just can't deliver the
finesse that a type master can give you. I always wondered who those type
masters were and why they never worked the midnight shift while my job
was being set. My beloved x-acto knife saved a lot of typesetting jobs, but
it can't compete anymore. So to the typesetter who once kicked me out of
her office because I wanted her to reset some type: Game over, man.