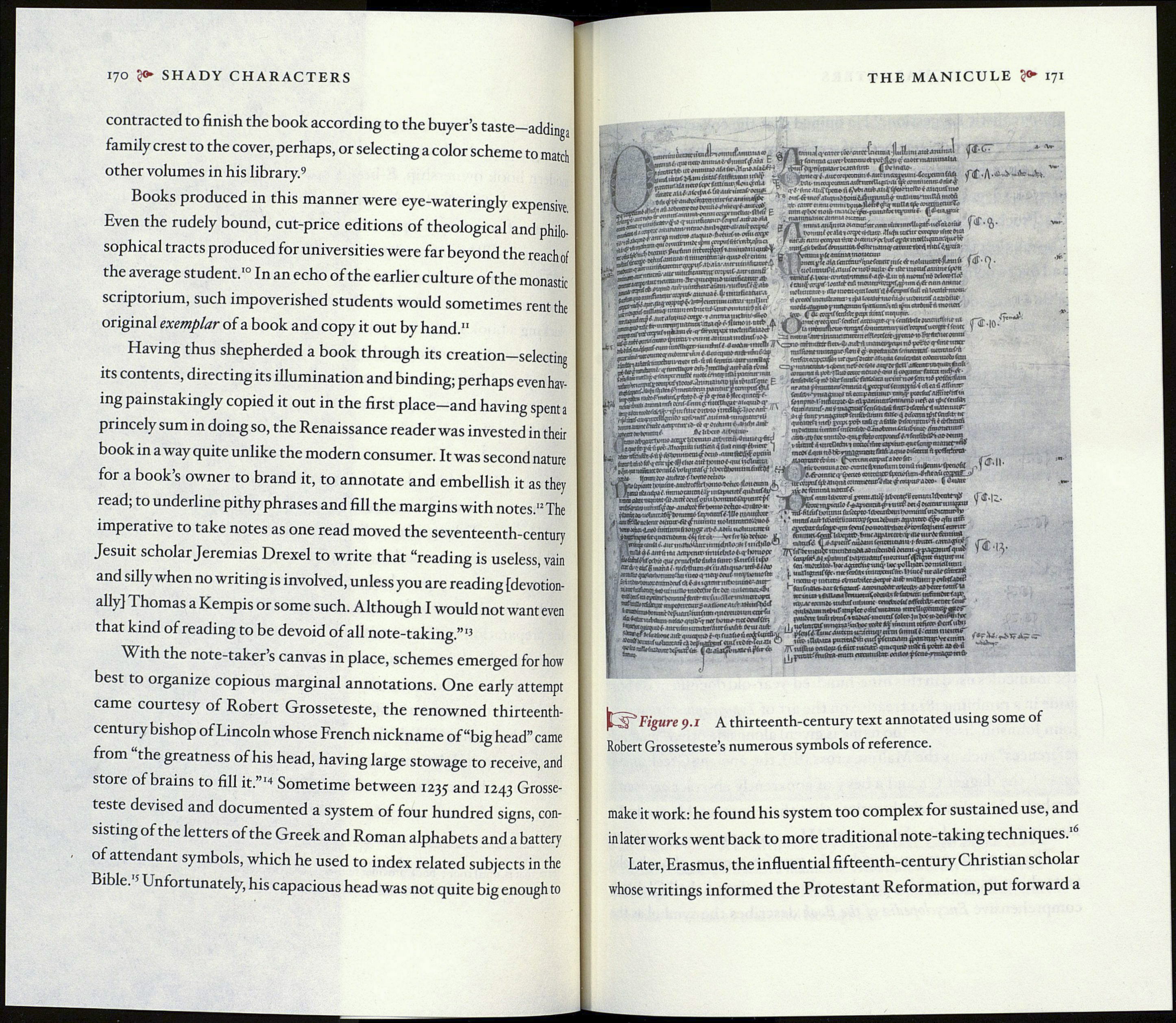 contracted to finish the book according to the buyer’s taste-adding
family crest to the cover, perhaps, or selecting a color scheme to match
other volumes in his library.9

Books produced in this manner were eye-wateringly expensive
Even the rudely bound, cut-price editions of theological and philo-
sophical tracts produced for universities were far beyond the reach of
the average student.10 In an echo of the earlier culture of the monastic
scriptorium, such impoverished students would sometimes rent the
original exemplar of a book and copy it out by hand."

Having thus shepherded a book through its creation—selecting
its contents, directing its illumination and binding; perhaps even hav¬
ing painstakingly copied it out in the first place-and having spenta
princely sum in doing so, the Renaissance reader was invested in their
book in a way quite unlike the modern consumer. It was second nature
for a book’s owner to brand it, to annotate and embellish it as they
read; to underline pithy phrases and fill the margins with notes.12 The
imperative to take notes as one read moved the seventeenth-century
Jesuit scholar Jeremias Drexel to write that “reading is useless, vain
and silly when no writing is involved, unless you are reading [devotion-
allyj Thomas a Kempis or some such. Although I would not want even
that kind of reading to be devoid of all note-taking.”'3

With the note-taker’s canvas in place, schemes emerged for how
best to organize copious marginal annotations. One early attempt
came courtesy of Robert Grosseteste, the renowned thirteenth-
century bishop of Lincoln whose French nickname of “big head” came
from the greatness of his head, having large stowage to receive, and
store of brains to fill it.”и Sometime between 1235 and 1243 Grosse¬
teste devised and documented a system of four hundred signs, con¬
sisting of the letters of the Greek and Roman alphabets and a battery
of attendant symbols, which he used to index related subjects in the
Bible.15 Unfortunately, his capacious head was not quite big enough to

make it work: he found his system too complex for sustained use, and
in later works went back to more traditional note-taking techniques.