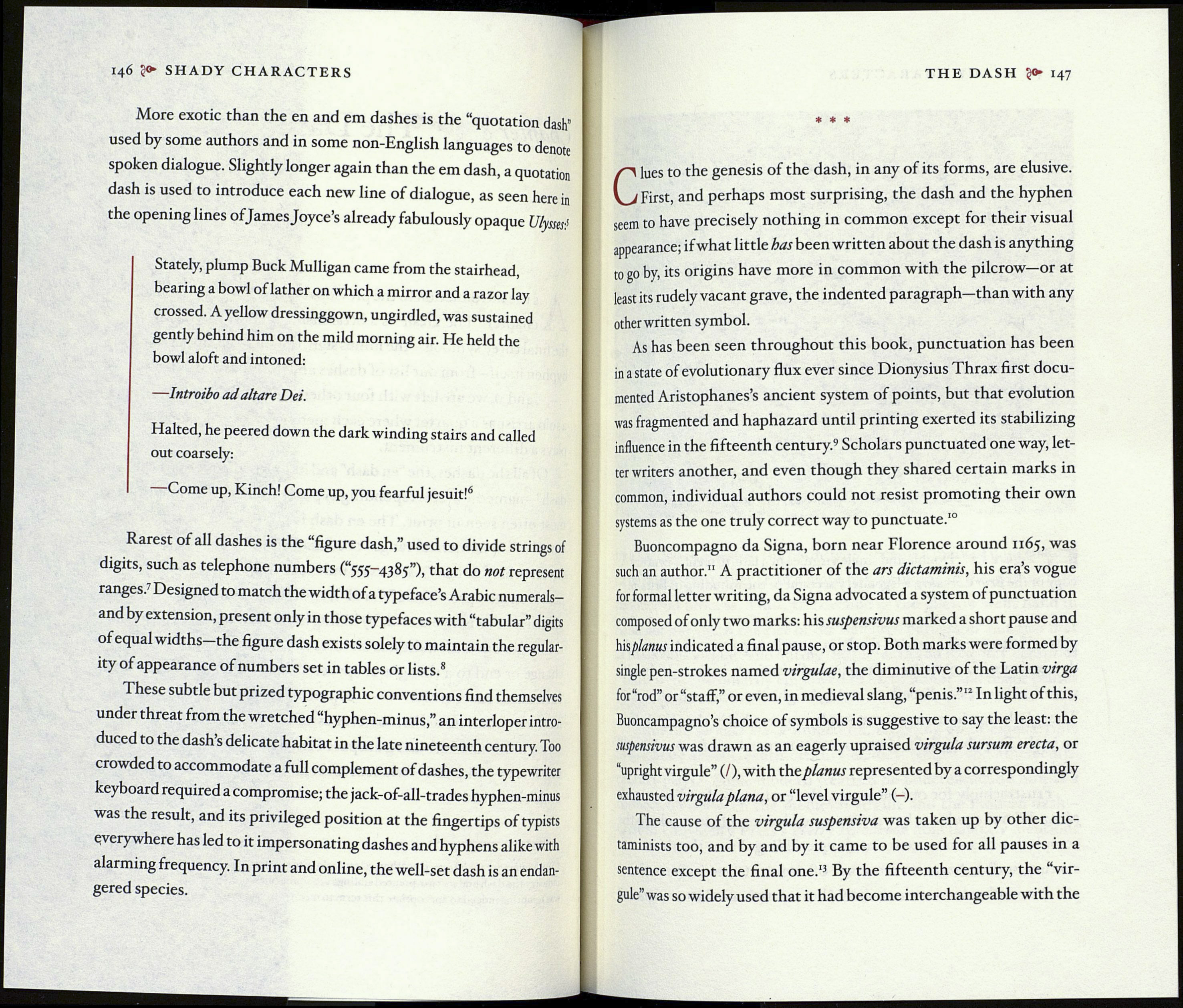 More exotic than the en and em dashes is the “quotation dash”
used by some authors and in some non-English languages to denote
spoken dialogue. Slightly longer again than the em dash, a quotation
dash is used to introduce each new line of dialogue, as seen here in
the opening lines of James Joyce’s already fabulously opaque Ulysses-}

Stately, plump Buck Mulligan came from the stairhead,
bearing a bowl of lather on which a mirror and a razor lay
crossed. A yellow dressinggown, ungirdled, was sustained
gently behind him on the mild morning air. He held the
bowl aloft and intoned:

Halted, he peered down the dark winding stairs and called
out coarsely:

Come up, Kinch! Come up, you fearful jesuit!6

Rarest of all dashes is the “figure dash,” used to divide strings of
digits, such as telephone numbers (“555-4385”), that do not represent
ranges.7 Designed to match the width of a typeface’s Arabic numerals-
and by extension, present only in those typefaces with “tabular” digits
of equal widths—the figure dash exists solely to maintain the regular¬
ity of appearance of numbers set in tables or lists.8

These subtle but prized typographic conventions find themselves
under threat from the wretched “hyphen-minus,” an interloper intro¬
duced to the dash’s delicate habitat in the late nineteenth century. Too
crowded to accommodate a full complement of dashes, the typewriter
keyboard required a compromise; the jack-of-all-trades hyphen-minus
was the result, and its privileged position at the fingertips of typists
everywhere has led to it impersonating dashes and hyphens alike with
alarming frequency. In print and online, the well-set dash is an endan¬
gered species.

Clues to the genesis of the dash, in any of its forms, are elusive.
First, and perhaps most surprising, the dash and the hyphen
seem to have precisely nothing in common except for their visual
appearance; if what little has been written about the dash is anything
to go by, its origins have more in common with the pilcrow—or at
least its rudely vacant grave, the indented paragraph—than with any
other written symbol.

As has been seen throughout this book, punctuation has been
inastate of evolutionary flux ever since Dionysius Thrax first docu¬
mented Aristophanes’s ancient system of points, but that evolution
was fragmented and haphazard until printing exerted its stabilizing
influence in the fifteenth century.9 Scholars punctuated one way, let¬
ter writers another, and even though they shared certain marks in
common, individual authors could not resist promoting their own
systems as the one truly correct way to punctuate.10

Buoncompagno da Signa, born near Florence around 1165, was
such an author." A practitioner of the ars dictaminis, his era’s vogue
for formal letter writing, da Signa advocated a system of punctuation
composed of only two marks: his suspensivas marked a short pause and
planus indicated a final pause, or stop. Both marks were formed by
single pen-strokes named virgulae, the diminutive of the Latin virga
for“rod” or “staff,” or even, in medieval slang, “penis.”17 In light of this,
Buoncampagno’s choice of symbols is suggestive to say the least: the
suspensivus was drawn as an eagerly upraised virgula sursum erecta, or
“upright virgule” (/), with the planus represented by a correspondingly
exhausted virgula plana, or “level virgule” (-).

The cause of the virgula suspensiva was taken up by other dic-
taminists too, and by and by it came to be used for all pauses in a
sentence except the final one.'3 By the fifteenth century, the “vir¬
gule” was so widely used that it had become interchangeable with the