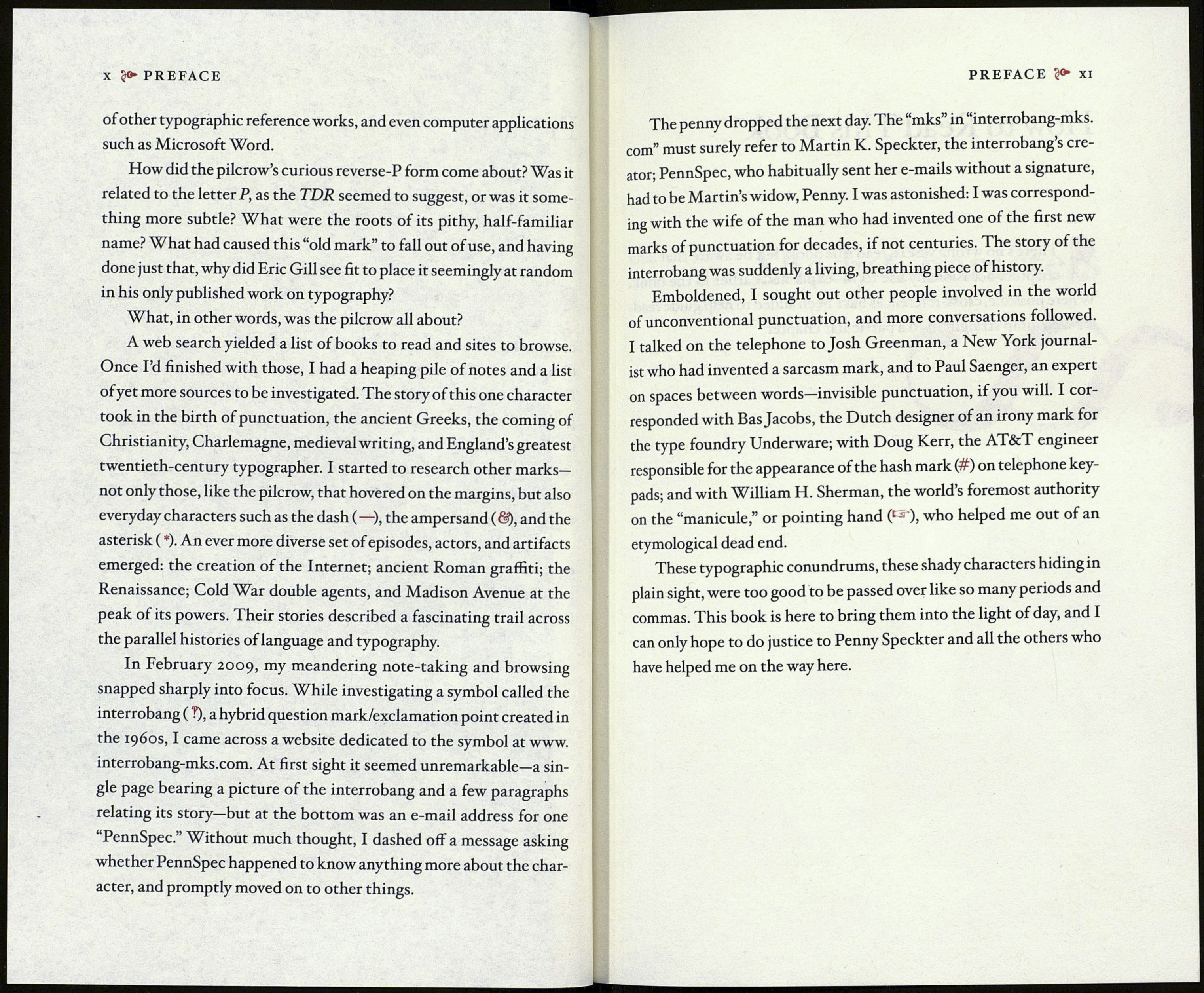 of other typographie reference works, and even computer applications
such as Microsoft Word.

How did the pilcrow’s curious reverse-P form come about? Was it
related to the letter P, as the TDR seemed to suggest, or was it some¬
thing more subtle? What were the roots of its pithy, half-familiar
name? What had caused this “old mark” to fall out of use, and having
done just that, why did Eric Gill see fit to place it seemingly at random
in his only published work on typography?

What, in other words, was the pilcrow all about?

A web search yielded a list of books to read and sites to browse.
Once I’d finished with those, I had a heaping pile of notes and a list
of yet more sources to be investigated. The story of this one character
took in the birth of punctuation, the ancient Greeks, the coming of
Christianity, Charlemagne, medieval writing, and England’s greatest
twentieth-century typographer. I started to research other marks—
not only those, like the pilcrow, that hovered on the margins, but also
everyday characters such as the dash (—), the ampersand {&), and the
asterisk ( *). An ever more diverse set of episodes, actors, and artifacts
emerged: the creation of the Internet; ancient Roman graffiti; the
Renaissance; Cold War double agents, and Madison Avenue at the
peak of its powers. Their stories described a fascinating trail across
the parallel histories of language and typography.

In February 2009, my meandering note-taking and browsing
snapped sharply into focus. While investigating a symbol called the
interrobang ( T), a hybrid question mark/exclamation point created in
the 1960S, I came across a website dedicated to the symbol at www.
interrobang-mks.com. At first sight it seemed unremarkable—a sin¬
gle page bearing a picture of the interrobang and a few paragraphs
relating its story—but at the bottom was an e-mail address for one
PennSpec.” Without much thought, I dashed off a message asking
whether PennSpec happened to know anything more about the char¬
acter, and promptly moved on to other things.

The penny dropped the next day. The “mks” in “interrobang-mks.
com” must surely refer to Martin K. Speckter, the interrobang’s cre¬
ator; PennSpec, who habitually sent her e-mails without a signature,
had to be Martin’s widow, Penny. I was astonished: I was correspond¬
ing with the wife of the man who had invented one of the first new
marks of punctuation for decades, if not centuries. The story of the
interrobang was suddenly a living, breathing piece of history.

Emboldened, I sought out other people involved in the world
of unconventional punctuation, and more conversations followed.

I talked on the telephone to Josh Greenman, a New York journal¬
ist who had invented a sarcasm mark, and to Paul Saenger, an expert
on spaces between words—invisible punctuation, if you will. I cor¬
responded with Bas Jacobs, the Dutch designer of an irony mark for
the type foundry Underware; with Doug Kerr, the AT&T engineer
responsible for the appearance of the hash mark (#) on telephone key¬
pads; and with William H. Sherman, the world’s foremost authority
on the “manicule,” or pointing hand (cir), who helped me out of an
etymological dead end.

These typographic conundrums, these shady characters hiding in
plain sight, were too good to be passed over like so many periods and
commas. This book is here to bring them into the light of day, and I
can only hope to do justice to Penny Speckter and all the others who
have helped me on the way here.