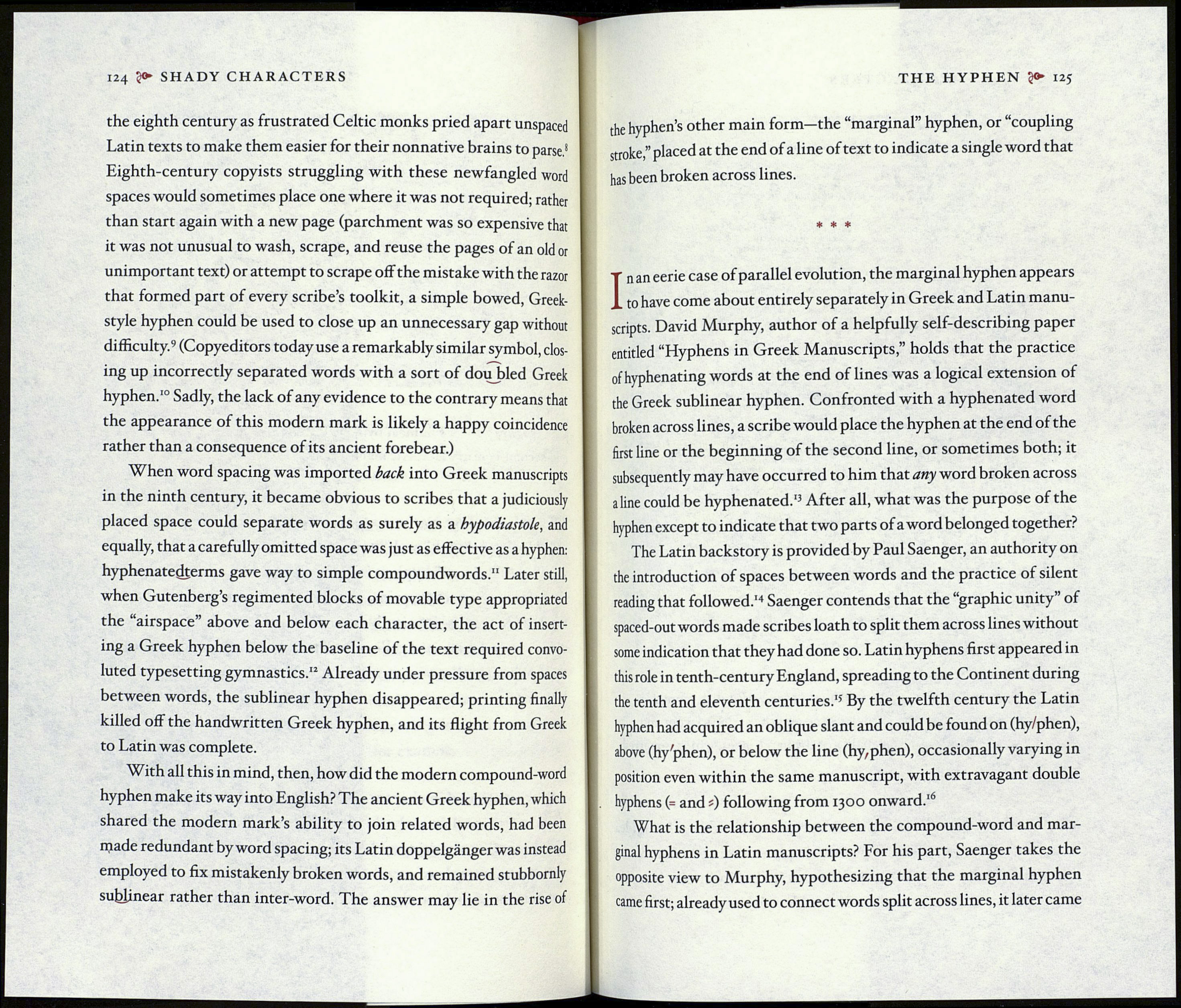 the eighth century as frustrated Celtic monks pried apart unspaced
Latin texts to make them easier for their nonnative brains to parse.®
Eighth-century copyists struggling with these newfangled word
spaces would sometimes place one where it was not required; rather
than start again with a new page (parchment was so expensive that
it was not unusual to wash, scrape, and reuse the pages of an oidor
unimportant text) or attempt to scrape off the mistake with the razor
that formed part of every scribe’s toolkit, a simple bowed, Greek-
style hyphen could be used to close up an unnecessary gap without
difficulty.9 (Copyeditors today use a remarkably similar symbol, clos¬
ing up incorrectly separated words with a sort of doubled Greek
hyphen.10 Sadly, the lack of any evidence to the contrary means that
the appearance of this modern mark is likely a happy coincidence
rather than a consequence of its ancient forebear.)

When word spacing was imported back into Greek manuscripts
in the ninth century, it became obvious to scribes that a judiciously
placed space could separate words as surely as a hypodiastole, and
equally, that a carefully omitted space was just as effective as a hyphen:
hyphenatedterms gave way to simple compoundwords." Later still,
when Gutenberg’s regimented blocks of movable type appropriated
the “airspace” above and below each character, the act of insert¬
ing a Greek hyphen below the baseline of the text required convo¬
luted typesetting gymnastics.'2 Already under pressure from spaces
between words, the sublinear hyphen disappeared; printing finally
killed off the handwritten Greek hyphen, and its flight from Greek
to Latin was complete.

With all this in mind, then, how did the modern compound-word
hyphen make its way into English? The ancient Greek hyphen, which
shared the modern mark’s ability to join related words, had been
made redundant byword spacing; its Latin doppelgänger was instead
employed to fix mistakenly broken words, and remained stubbornly
subjmear rather than inter-word. The answer may lie in the rise of

the hyphen’s other main form—the “marginal” hyphen, or “coupling
stroke,” placed at the end of a line of text to indicate a single word that
has been broken across lines.

In an eerie case of parallel evolution, the marginal hyphen appears
to have come about entirely separately in Greek and Latin manu¬
scripts. David Murphy, author of a helpfully self-describing paper
entitled “Hyphens in Greek Manuscripts,” holds that the practice
of hyphenating words at the end of lines was a logical extension of
the Greek sublinear hyphen. Confronted with a hyphenated word
broken across lines, a scribe would place the hyphen at the end of the
first line or the beginning of the second line, or sometimes both; it
subsequently may have occurred to him that any word broken across
aline could be hyphenated.'3 After all, what was the purpose of the
hyphen except to indicate that two parts of a word belonged together?

The Latin backstory is provided by Paul Saenger, an authority on
the introduction of spaces between words and the practice of silent
reading that followed.'4 Saenger contends that the “graphic unity” of
spaced-out words made scribes loath to split them across lines without
some indication that they had done so. Latin hyphens first appeared in
this role in tenth-century England, spreading to the Continent during
the tenth and eleventh centuries.1’ By the twelfth century the Latin
hyphen had acquired an oblique slant and could be found on (hy/phen),
above (hyphen), or below the line (hy,phen), occasionally varying in
position even within the same manuscript, with extravagant double
hyphens (= and ') following from 1300 onward.'6

What is the relationship between the compound-word and mar¬
ginal hyphens in Latin manuscripts? For his part, Saenger takes the
opposite view to Murphy, hypothesizing that the marginal hyphen
came first; alreadyused to connect words split across lines, it later came