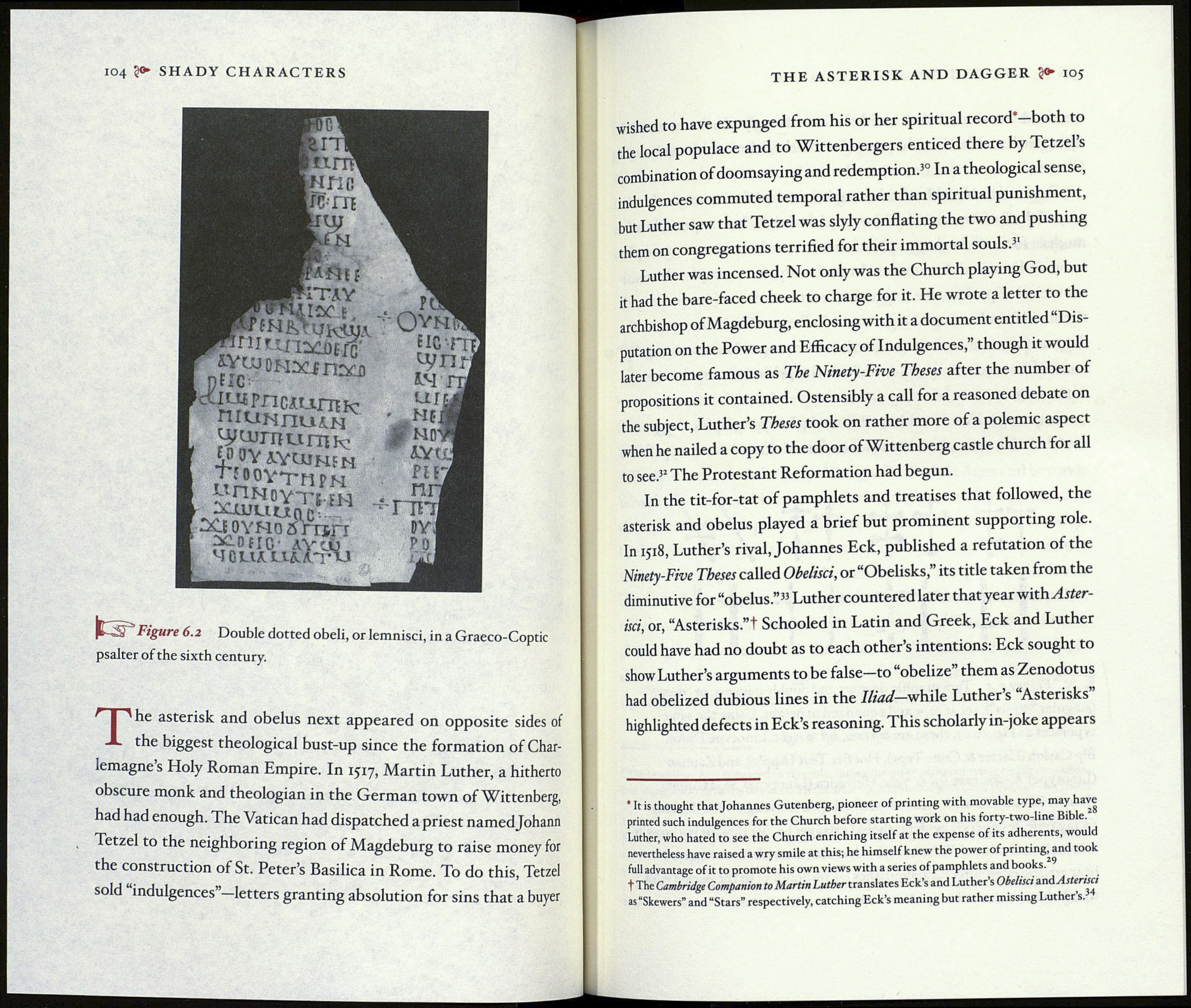 r I л I*e asterisk and obelus next appeared on opposite sides of
the biggest theological bust-up since the formation of Char¬
lemagne’s Holy Roman Empire. In 1517, Martin Luther, a hitherto
obscure monk and theologian in the German town of Wittenberg,
had had enough. The Vatican had dispatched a priest named Johann
Tetzel to the neighboring region of Magdeburg to raise money for
the construction of St. Peter’s Basilica in Rome. To do this, Tetzel
sold indulgences”—letters granting absolution for sins that a buyer

THE ASTERISK AND DAGGER 105

wished to have expunged from his or her spiritual record*-both to
the local populace and to Wittenbergers enticed there by Tetzel’s
combination of doomsaying and redemption.30 Ina theological sense,
indulgences commuted temporal rather than spiritual punishment,
but Luther saw that Tetzel was slyly conflating the two and pushing
them on congregations terrified for their immortal souls.31

Luther was incensed. Not only was the Church playing God, but
it had the bare-faced cheek to charge for it. He wrote a letter to the
archbishop of Magdeburg, enclosing with it a document entitled “Dis¬
putation on the Power and Efficacy of Indulgences,” though it would
later become famous as The Ninety-Five Theses after the number of
propositions it contained. Ostensibly a call for a reasoned debate on
the subject, Luther’s Theses took on rather more of a polemic aspect
when he nailed a copy to the door of Wittenberg castle church for all
to see.32 The Protestant Reformation had begun.

In the tit-for-tat of pamphlets and treatises that followed, the
asterisk and obelus played a brief but prominent supporting role.
In 1518, Luther’s rival, Johannes Eck, published a refutation of the
Ninety-Five Theses called Obelisci, or “Obelisks,” its title taken from the
diminutive for “obelus.”33 Luther countered later that year with Aster-
isci, or, “Asterisks.”t Schooled in Latin and Greek, Eck and Luther
could have had no doubt as to each other’s intentions: Eck sought to
show Luther’s arguments tobe false—to obelize themasZenodotus
had obelized dubious lines in the Iliad.—while Luther s Asterisks
highlighted defects in Eck’s reasoning. This scholarly in-joke appears

• It is thought that Johannes Gutenberg, pioneer of printing with movable type, may have
printed such indulgences for the Church before starting work on his forty-two-line Bible.
Luther, who hated to see the Church enriching itself at the expense of its adherents, would
nevertheless have raised a wry smile at this; he himself knew the power of printing^and took
full advantage of it to promote his own views with aseries of pamphlets and books,
t The Cambridge Companion to Martin Luther translates Eck’s and Luther’s Obelisci and Asterischi
as “Skewers” and “Stars” respectively, catching Eck’s meaning but rather missing Luther s.