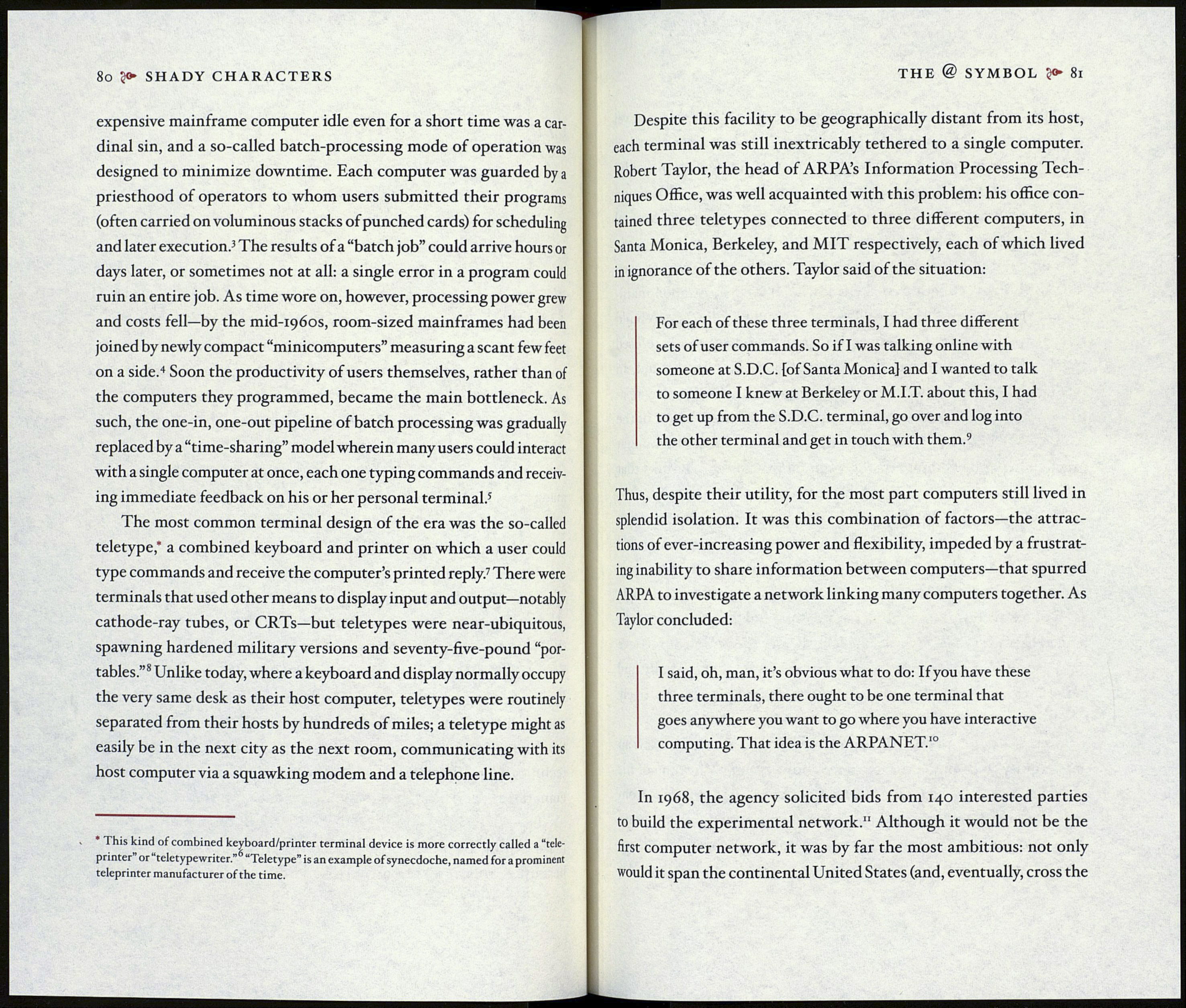 expensive mainframe computer idle even for a short time was a car¬
dinal sin, and a so-called batch-processing mode of operation was
designed to minimize downtime. Each computer was guarded by a
priesthood of operators to whom users submitted their programs
(often carried on voluminous stacks of punched cards) for scheduling
and later execution.3 The results of a “batch job” could arrive hours or
days later, or sometimes not at all: a single error in a program could
ruin an entire job. As time wore on, however, processing power grew
and costs fell—by the mid-1960s, room-sized mainframes had been
joined by newly compact “minicomputers” measuring a scant few feet
on a side.4 Soon the productivity of users themselves, rather than of
the computers they programmed, became the main bottleneck. As
such, the one-in, one-out pipeline of batch processing was gradually
replaced by a “time-sharing” model wherein many users could interact
with a single computer at once, each one typing commands and receiv¬
ing immediate feedback on his or her personal terminal.5

The most common terminal design of the era was the so-called
teletype,* a combined keyboard and printer on which a user could
type commands and receive the computer’s printed reply.7 There were
terminals that used other means to display input and output—notably
cathode-ray tubes, or CRTs—but teletypes were near-ubiquitous,
spawning hardened military versions and seventy-five-pound “por¬
tables.”8 Unlike today, where a keyboard and display normally occupy
the very same desk as their host computer, teletypes were routinely
separated from their hosts by hundreds of miles; a teletype might as
easily be in the next city as the next room, communicating with its
host computer via a squawking modem and a telephone line.

* This kind of combined keyboard/printer terminal device is more correctly called a “tele¬
printer” or “teletypewriter.”6 “Teletype” is an example of synecdoche, named for a prominent
teleprinter manufacturer of the time.

Despite this facility to be geographically distant from its host,
each terminal was still inextricably tethered to a single computer.
Robert Taylor, the head of ARPA’s Information Processing Tech¬
niques Office, was well acquainted with this problem: his office con¬
tained three teletypes connected to three different computers, in
Santa Monica, Berkeley, and MIT respectively, each of which lived
in ignorance of the others. Taylor said of the situation:

For each of these three terminals, I had three different
sets of user commands. So if I was talking online with
someone at S.D.C. {of Santa Monica} and I wanted to talk
to someone I knew at Berkeley or M.I.T. about this, I had
to get up from the S.D.C. terminal, go over and log into
the other terminal and get in touch with them.9

Thus, despite their utility, for the most part computers still lived in
splendid isolation. It was this combination of factors—the attrac¬
tions of ever-increasing power and flexibility, impeded by a frustrat¬
ing inability to share information between computers—that spurred
ARPA to investigate a network linking many computers together. As
Taylor concluded:

I said, oh, man, it’s obvious what to do: If you have these
three terminals, there ought to be one terminal that
goes anywhere you want to go where you have interactive
computing. That idea is the ARPANET.10

In Г968, the agency solicited bids from 140 interested parties
to build the experimental network.11 Although it would not be the
first computer network, it was by far the most ambitious: not only
would it span the continental United States (and, eventually, cross the