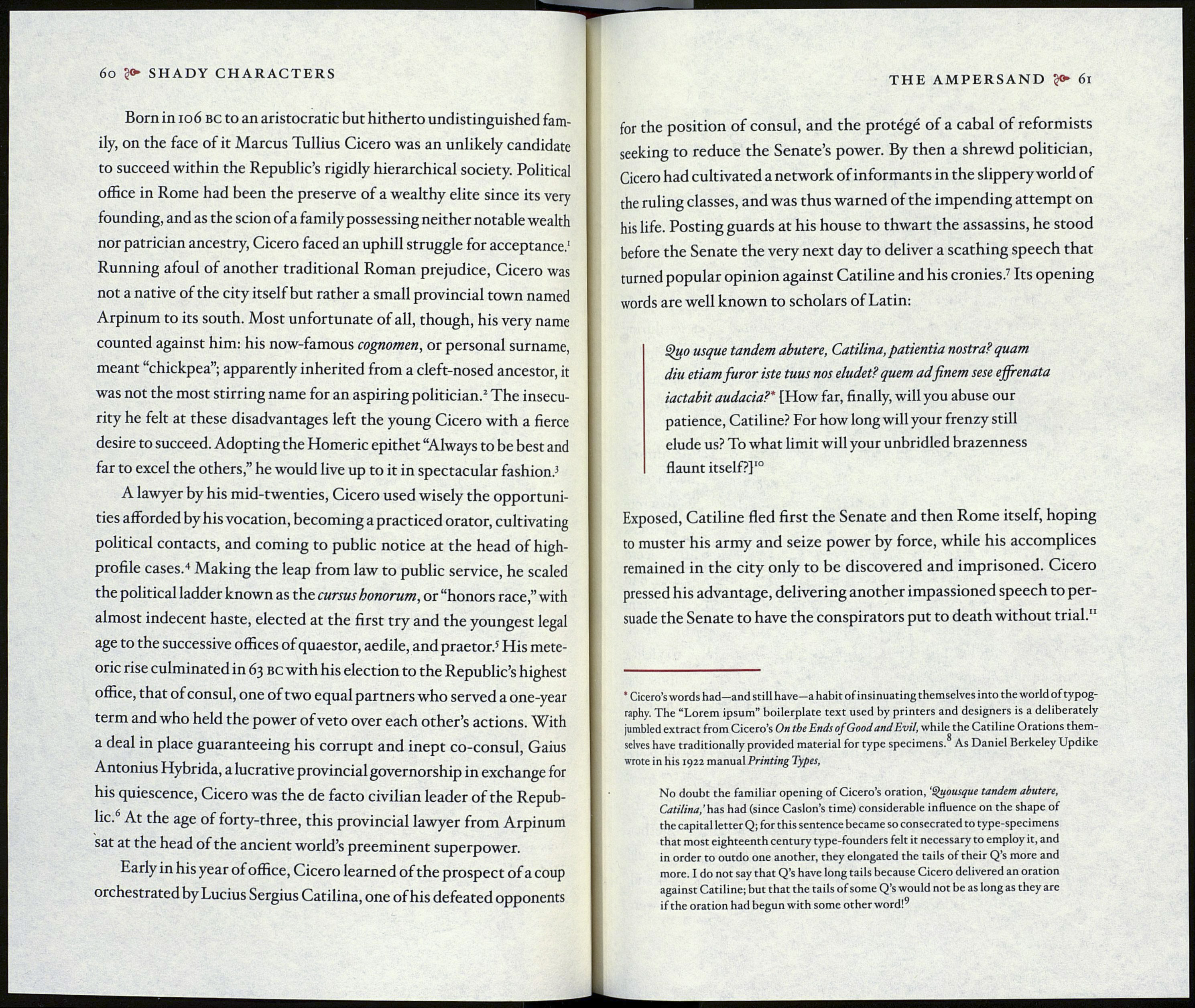 Born in 106 вс to an aristocratic but hitherto undistinguished fam¬
ily, on the face of it Marcus Tullius Cicero was an unlikely candidate
to succeed within the Republic’s rigidly hierarchical society. Political
office in Rome had been the preserve of a wealthy elite since its very
founding, and as the scion of a family possessing neither notable wealth
nor patrician ancestry, Cicero faced an uphill struggle for acceptance.1
Running afoul of another traditional Roman prejudice, Cicero was
not a native of the city itself but rather a small provincial town named
Arpinum to its south. Most unfortunate of all, though, his very name
counted against him: his now-famous cognomen, or personal surname,
meant “chickpea”; apparently inherited from a cleft-nosed ancestor, it
was not the most stirring name for an aspiring politician.2 The insecu¬
rity he felt at these disadvantages left the young Cicero with a fierce
desire to succeed. Adopting the Homeric epithet “Always to be best and
far to excel the others,” he would live up to it in spectacular fashion.3

A lawyer by his mid-twenties, Cicero used wisely the opportuni¬
ties afforded by his vocation, becoming a practiced orator, cultivating
political contacts, and coming to public notice at the head of high-
profile cases.4 Making the leap from law to public service, he scaled
the political ladder known as the cursus bonorum, or “honors race,” with
almost indecent haste, elected at the first try and the youngest legal
age to the successive offices of quaestor, aedile, and praetor.5 His mete¬
oric rise culminated in 63 вс with his election to the Republic’s highest
office, that of consul, one of two equal partners who served a one-year
term and who held the power of veto over each other’s actions. With
a deal in place guaranteeing his corrupt and inept co-consul, Gaius
Antonius Hybrida, a lucrative provincial governorship in exchange for
his quiescence, Cicero was the de facto civilian leader of the Repub¬
lic.6 At the age of forty-three, this provincial lawyer from Arpinum
sat at the head of the ancient world’s preeminent superpower.

Early in his year of office, Cicero learned of the prospect of a coup
orchestrated by Lucius Sergius Catilina, one of his defeated opponents

for the position of consul, and the protégé of a cabal of reformists
seeking to reduce the Senate’s power. By then a shrewd politician,
Cicero had cultivated a network of informants in the slippery world of
the ruling classes, and was thus warned of the impending attempt on
his life. Posting guards at his house to thwart the assassins, he stood
before the Senate the very next day to deliver a scathing speech that
turned popular opinion against Catiline and his cronies.7 Its opening
words are well known to scholars of Latin:

Exposed, Catiline fled first the Senate and then Rome itself, hoping
to muster his army and seize power by force, while his accomplices
remained in the city only to be discovered and imprisoned. Cicero
pressed his advantage, delivering another impassioned speech to per¬
suade the Senate to have the conspirators put to death without trial.11

* Cicero’s words had—and still have—a habit of insinuating themselves into the world of typog¬
raphy. The “Lorem ipsum” boilerplate text used by printers and designers is a deliberately
jumbled extract from Cicero’s On the Ends of Good and Evil, while the Catiline Orations them¬
selves have traditionally provided material for type specimens. As Daniel Berkeley Updike
wrote in his 1922 manual Printing Types,

No doubt the familiar opening of Cicero’s oration, ‘S>yousque tandem abutere,
Catilina,'has had (since Caslon’s time) considerable influence on the shape of
the capital letter Q; for this sentence became so consecrated to type-specimens
that most eighteenth century type-founders felt it necessary to employ it, and
in order to outdo one another, they elongated the tails of their Q’s more and
more. I do not say that Q’s have long tails because Cicero delivered an oration
against Catiline; but that the tails of some Q’s would not be as long as they are
if the oration had begun with some other word!9