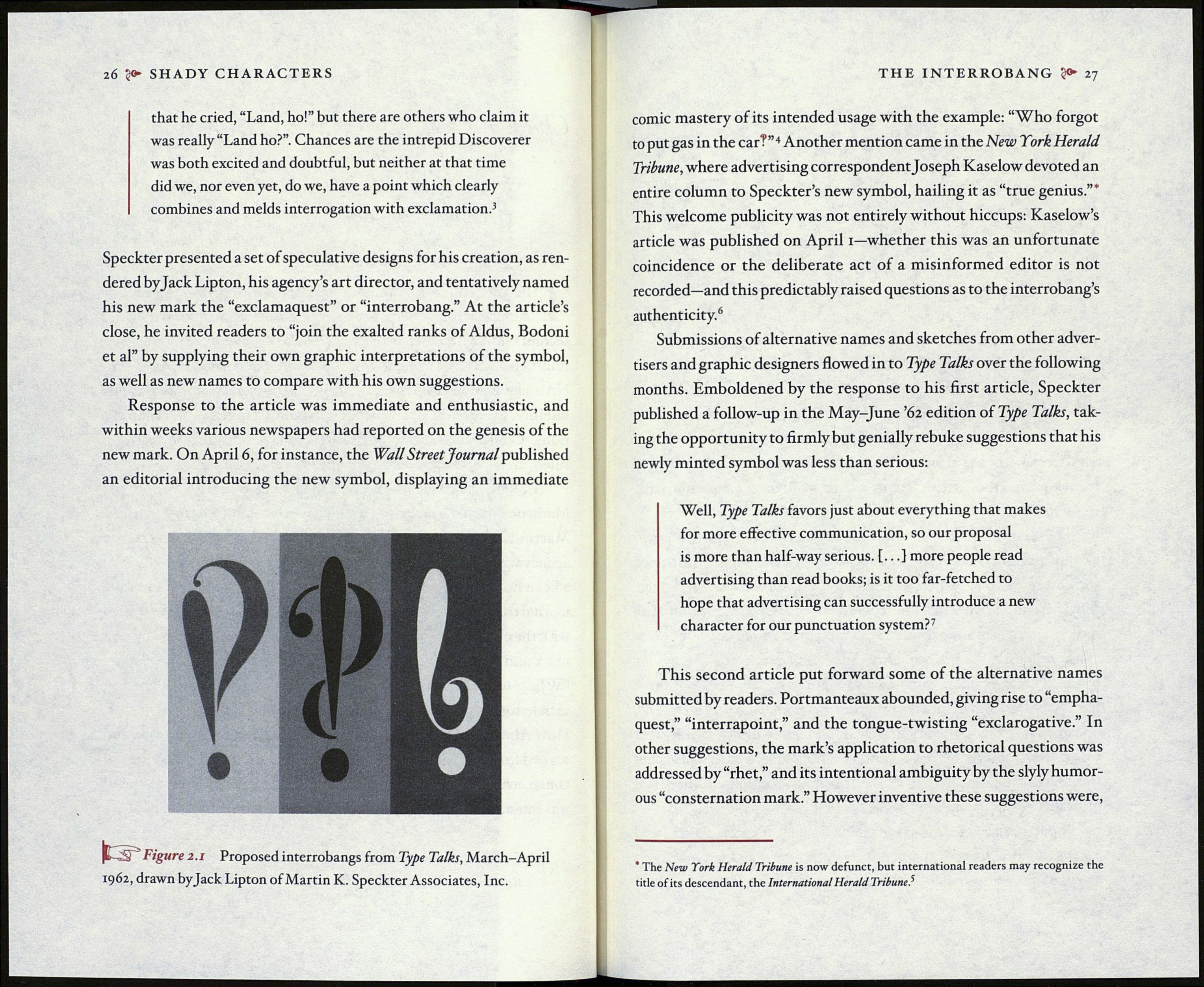 that he cried, “Land, ho!” but there are others who claim it
was really “Land ho?”. Chances are the intrepid Discoverer
was both excited and doubtful, but neither at that time
did we, nor even yet, do we, have a point which clearly
combines and melds interrogation with exclamation.3

Speckter presented a set of speculative designs for his creation, as ren¬
dered byjack Lipton, his agency’s art director, and tentatively named
his new mark the “exclamaquest” or “interrobang.” At the article’s
close, he invited readers to “join the exalted ranks of Aldus, Bodoni
et al” by supplying their own graphic interpretations of the symbol,
as well as new names to compare with his own suggestions.

Response to the article was immediate and enthusiastic, and
within weeks various newspapers had reported on the genesis of the
new mark. On April 6, for instance, the Wall Street Journal published
an editorial introducing the new symbol, displaying an immediate

comic mastery of its intended usage with the example: “Who forgot
to put gas in the car?”4 Another mention came in the New York Herald
Tribune, where advertising correspondent Joseph Kaselow devoted an
entire column to Speckter’s new symbol, hailing it as “true genius.”*
This welcome publicity was not entirely without hiccups: Kaselow’s
article was published on April 1—whether this was an unfortunate
coincidence or the deliberate act of a misinformed editor is not
recorded—and this predictably raised questions as to the interrobang’s
authenticity.6

Submissions of alternative names and sketches from other adver¬
tisers and graphic designers flowed in to Type Talks over the following
months. Emboldened by the response to his first article, Speckter
published a follow-up in the May-June ’62 edition of Type Talks, tak¬
ing the opportunity to firmly but genially rebuke suggestions that his
newly minted symbol was less than serious:

Well, Type Talks favors just about everything that makes
for more effective communication, so our proposal
is more than half-way serious. {...] more people read
advertising than read books; is it too far-fetched to
hope that advertising can successfully introduce a new
character for our punctuation system?7

This second article put forward some of the alternative names
submitted by readers. Portmanteaux abounded, giving rise to “empha-
quest,” “interrapoint,” and the tongue-twisting “exclarogative.” In
other suggestions, the mark’s application to rhetorical questions was
addressed by “rhet,” and its intentional ambiguity by the slyly humor¬
ous “consternation mark.” However inventive these suggestions were,