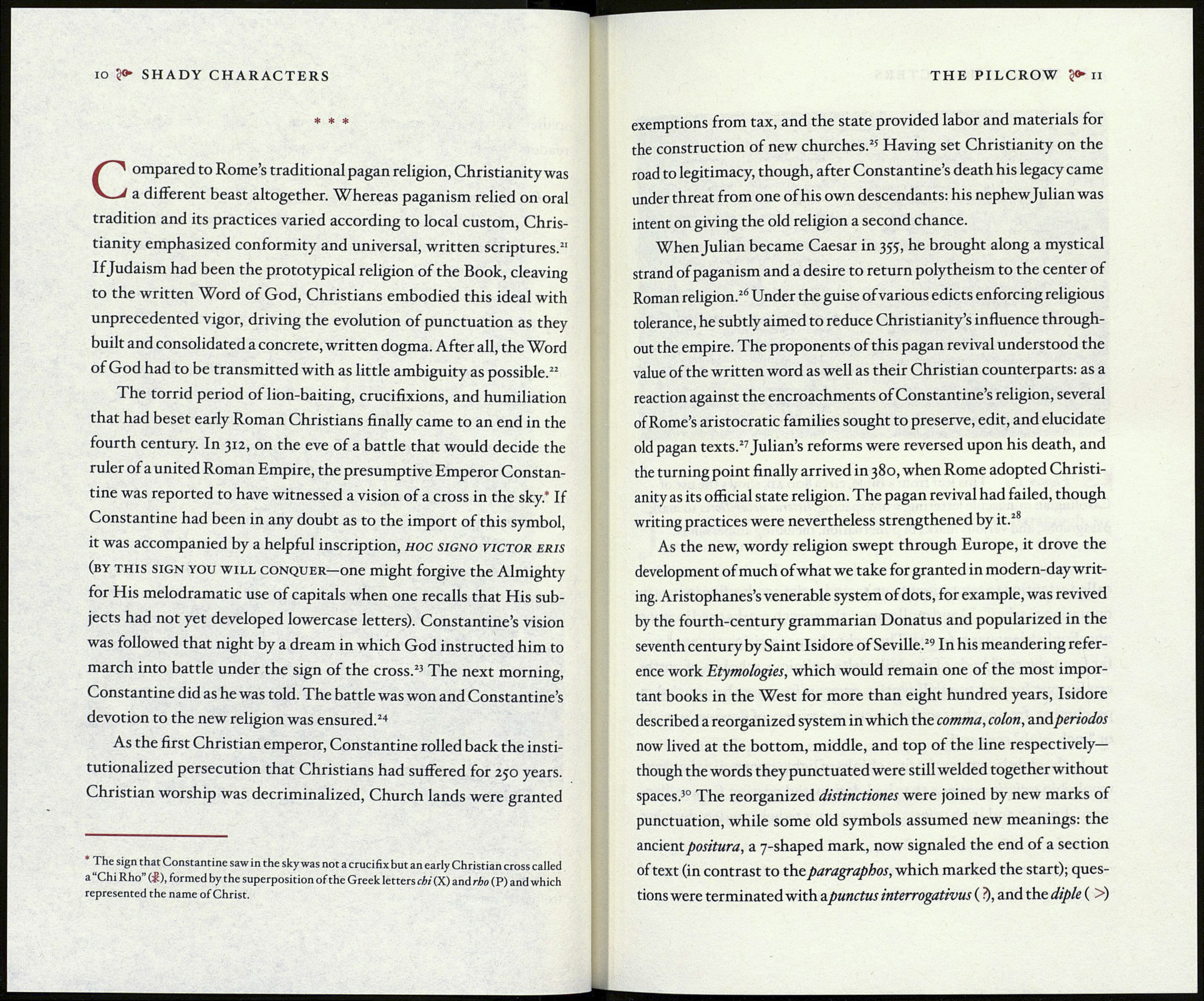 Compared to Rome’s traditional pagan religion, Christianity was
a different beast altogether. Whereas paganism relied on oral
tradition and its practices varied according to local custom, Chris¬
tianity emphasized conformity and universal, written scriptures.21
If Judaism had been the prototypical religion of the Book, cleaving
to the written Word of God, Christians embodied this ideal with
unprecedented vigor, driving the evolution of punctuation as they
built and consolidated a concrete, written dogma. After all, the Word
of God had to be transmitted with as little ambiguity as possible.22

The torrid period of lion-baiting, crucifixions, and humiliation
that had beset early Roman Christians finally came to an end in the
fourth century. In 312, on the eve of a battle that would decide the
ruler of a united Roman Empire, the presumptive Emperor Constan¬
tine was reported to have witnessed a vision of a cross in the sky.* If
Constantine had been in any doubt as to the import of this symbol,
it was accompanied by a helpful inscription, hoc signo victor eris
(by this sign you will conquer—one might forgive the Almighty
for His melodramatic use of capitals when one recalls that His sub¬
jects had not yet developed lowercase letters). Constantine’s vision
was followed that night by a dream in which God instructed him to
march into battle under the sign of the cross.23 The next morning,
Constantine did as he was told. The battle was won and Constantine’s
devotion to the new religion was ensured.24

As the first Christian emperor, Constantine rolled back the insti¬
tutionalized persecution that Christians had suffered for 250 years.
Christian worship was decriminalized, Church lands were granted

* The sign that Constantine saw in the sky was not a crucifix but an early Christian cross called
a “Chi Rho” fig), formed by the superposition of the Greek letters chi (X) and rho (P) and which
represented the name of Christ.

exemptions from tax, and the state provided labor and materials for
the construction of new churches.2S Having set Christianity on the
road to legitimacy, though, after Constantine’s death his legacy came
under threat from one of his own descendants: his nephewjulian was
intent on giving the old religion a second chance.

When Julian became Caesar in 355, he brought along a mystical
strand of paganism and a desire to return polytheism to the center of
Roman religion.26 Under the guise ofvarious edicts enforcing religious
tolerance, he subtly aimed to reduce Christianity’s influence through¬
out the empire. The proponents of this pagan revival understood the
value of the written word as well as their Christian counterparts: as a
reaction against the encroachments of Constantine’s religion, several
of Rome’s aristocratic families sought to preserve, edit, and elucidate
old pagan texts.27 Julian’s reforms were reversed upon his death, and
the turning point finally arrived in 380, when Rome adopted Christi¬
anity as its official state religion. The pagan revival had failed, though
writing practices were nevertheless strengthened by it.28

As the new, wordy religion swept through Europe, it drove the
development of much of what we take for granted in modern-day writ¬
ing. Aristophanes’s venerable system of dots, for example, was revived
by the fourth-century grammarian Donatus and popularized in the
seventh century by Saint Isidore of Seville.29 In his meandering refer¬
ence work Etymologies, which would remain one of the most impor¬
tant books in the West for more than eight hundred years, Isidore
described a reorganized system in which the comma, colon, and periodos
now lived at the bottom, middle, and top of the line respectively—
though the words they punctuated were still welded together without
spaces.30 The reorganized distinctiones were joined by new marks of
punctuation, while some old symbols assumed new meanings: the
ancient positura, a 7-shaped mark, now signaled the end of a section
of text (in contrast to the paragraphes, which marked the start); ques¬
tions were terminated with apunctus interrogativas ( ?), and the dip/e ( >)