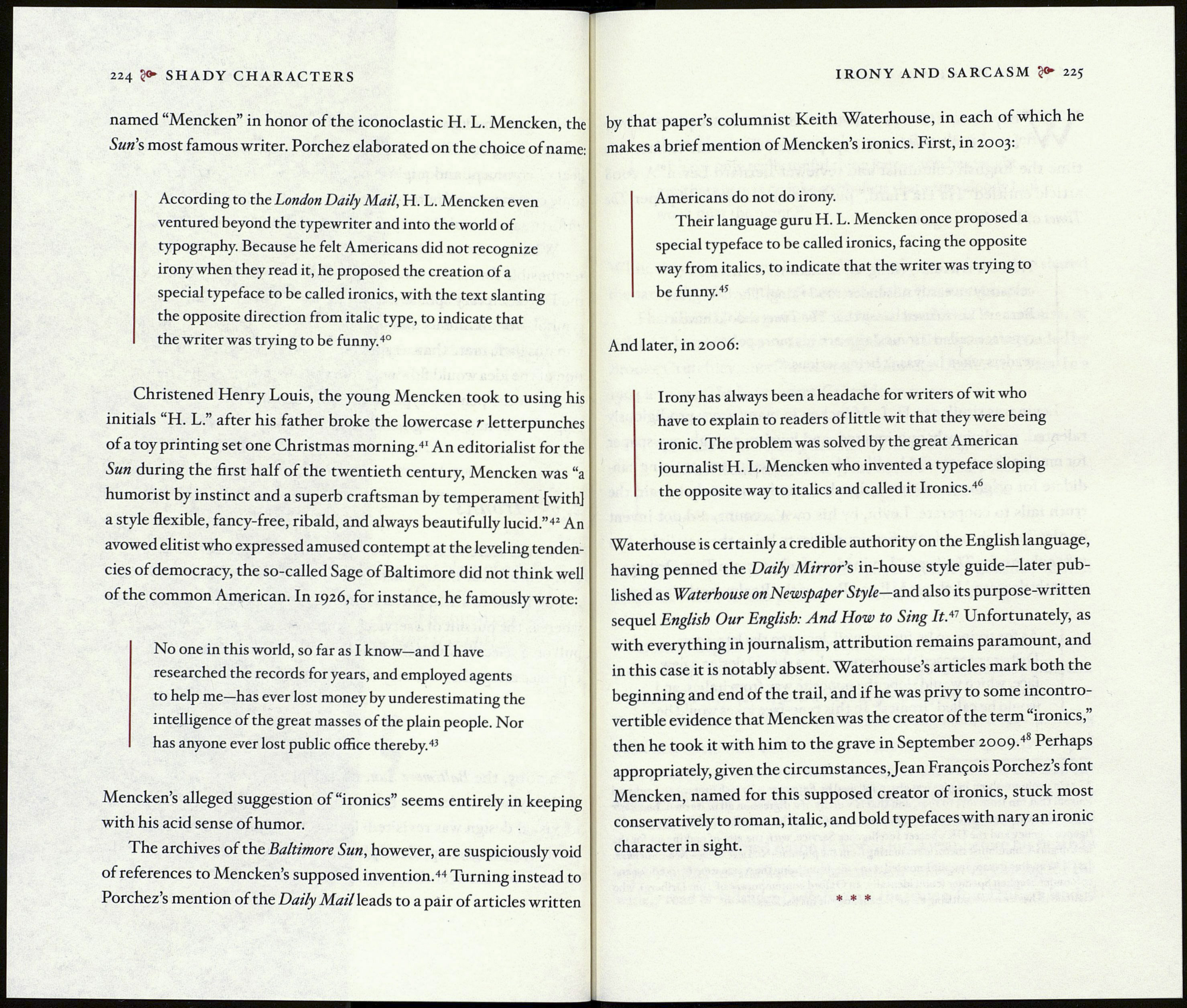 named “Mencken” in honor of the iconoclastic H. L. Mencken, the
Sun’s most famous writer. Porchez elaborated on the choice of name:

According to the London Daily Mail, H. L. Mencken even
ventured beyond the typewriter and into the world of
typography. Because he felt Americans did not recognize
irony when they read it, he proposed the creation of a
special typeface to be called ironies, with the text slanting
the opposite direction from italic type, to indicate that
the writer was trying to be funny.40

Christened Henry Louis, the young Mencken took to using his
initials “H. L.” after his father broke the lowercase r letterpunches
of a toy printing set one Christmas morning.41 An editorialist for the
Sun during the first half of the twentieth century, Mencken was “a
humorist by instinct and a superb craftsman by temperament [with]
a style flexible, fancy-free, ribald, and always beautifully lucid.”42 An
avowed elitist who expressed amused contempt at the leveling tenden¬
cies of democracy, the so-called Sage of Baltimore did not think well
of the common American. In 1926, for instance, he famously wrote:

No one in this world, so far as I know—and I have
researched the records for years, and employed agents
to help me—has ever lost money by underestimating the
intelligence of the great masses of the plain people. Nor
has anyone ever lost public office thereby.43

Mencken’s alleged suggestion of “ironies” seems entirely in keeping
with his acid sense of humor.

The archives of th& Baltimore Sun, however, are suspiciously void
of references to Mencken’s supposed invention.44 Turning instead to
Porchez’s mention of the Daily Mail leads to a pair of articles written

by that paper’s columnist Keith Waterhouse, in each of which he
makes a brief mention of Mencken’s ironies. First, in 2003:

Americans do not do irony.

Their language guru H. L. Mencken once proposed a
special typeface to be called ironies, facing the opposite
way from italics, to indicate that the writer was trying to
be funny.45

Irony has always been a headache for writers of wit who
have to explain to readers of little wit that they were being
ironic. The problem was solved by the great American
journalist H. L. Mencken who invented a typeface sloping
the opposite way to italics and called it Ironies.46

Waterhouse is certainly a credible authority on the English language,
having penned the Daily Mirror's in-house style guide—later pub¬
lished as Waterhouse on Newspaper Style—and also its purpose-written
sequel English Our English: And How to Sing ItA7 Unfortunately, as
with everything in journalism, attribution remains paramount, and
in this case it is notably absent. Waterhouse’s articles mark both the
beginning and end of the trail, and if he was privy to some incontro¬
vertible evidence that Mencken was the creator of the term “ironies,”
then he took it with him to the grave in September 2009.48 Perhaps
appropriately, given the circumstances, Jean François Porchez’s font
Mencken, named for this supposed creator of ironies, stuck most
conservatively to roman, italic, and bold typefaces with nary an ironic
character in sight.