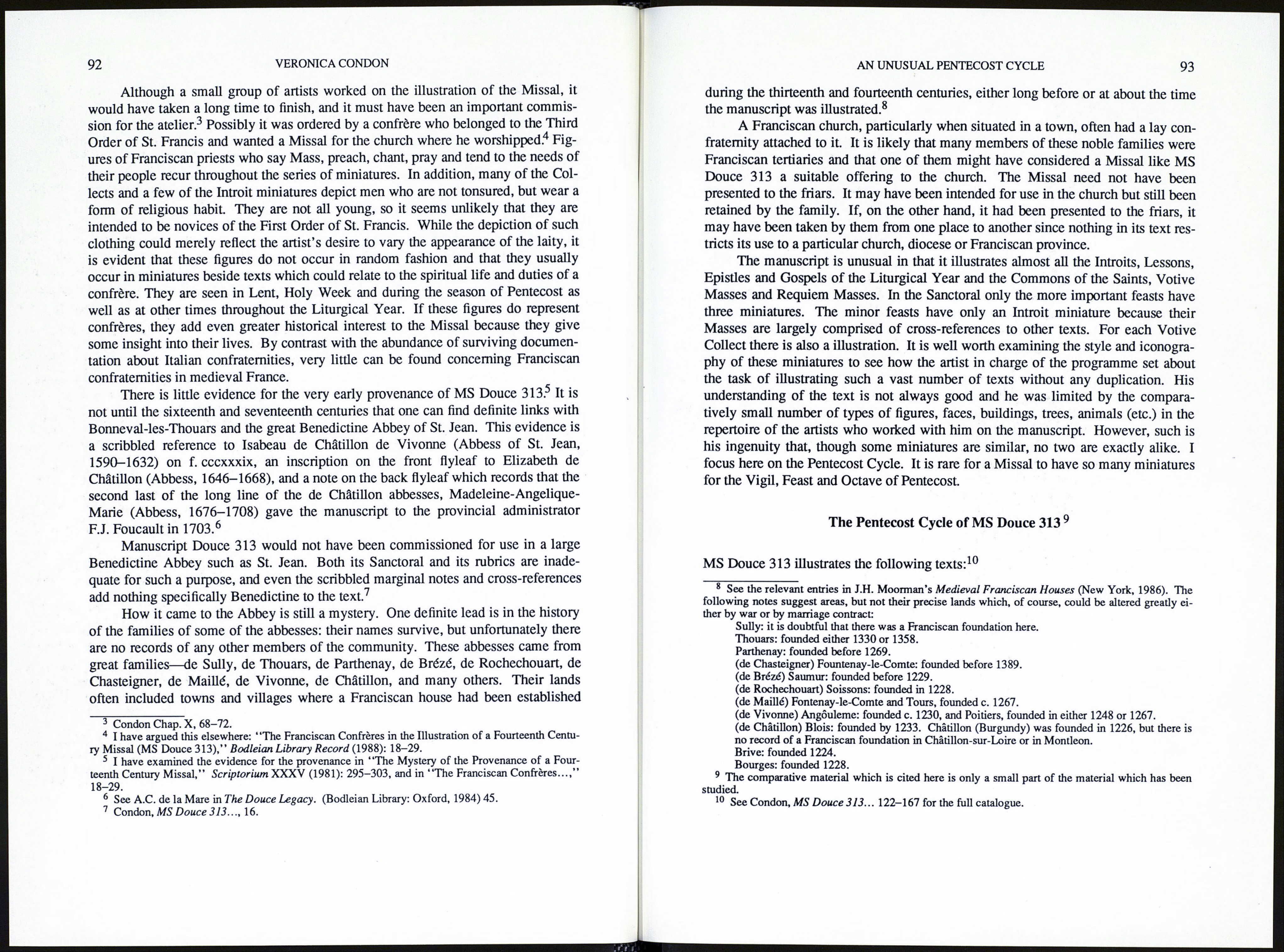 An Unusual Pentecost Cycle in a
Fourteenth Century Missal

Among the manuscripts left by Francis Douce to the Bodleian Library is a Four¬
teenth Century Franciscan Missal (Douce 313) which is remarkable for a number of
reasons. Of particular interest is its exceptionally large programme of illustration: in
addition to six full-page miniatures, it has twenty-four Calendar miniatures, some
nine hundred and twenty smaller miniatures and many hundreds of figures of apos¬
tles, prophets and evangelist symbols which identify the authors of the texts.1

The manuscript is remarkable not only because of the extremely large number
of illustrations it contains, but also because many of the smaller miniatures relate to
subjects that were seldom illustrated in contemporary manuscripts. The head of the
atelier—the artist who was responsible for the programme—must have had some
help from a cleric, almost certainly a Franciscan priest, and although he followed
many long-established artistic traditions, he often had to be both original and ingeni¬
ous to keep each scene close to the words of the text. Each miniature depicts either
an incident from the text, its opening words, its principal subject or its author. Noth¬
ing in the illustration of the manuscript is irrelevant or merely decorative.

This relationship between the miniature and the text is one of the most out¬
standing features of the Missal. It was intentional because the artist’s objective was
not only to illustrate the manuscript but to identify the texts so that they would be
easy to find. Fully illustrated Missals like MS Douce 313 arc rare: throughout the
thirteenth and most of the fourteenth centuries the usual form of Missal illustration is
a single full-page miniature or a very small number of historiated initials.2

1 There are many miniatures which are divided into parts or placed in the margin as an appendage
to the principal miniature. This makes it difficult to be precise as to their number; see Veronica Con¬
don, MS Douce 313, A Fourteenth Century Missal in the Bodleian Library, Oxford (Melbourne, 1984)
77.