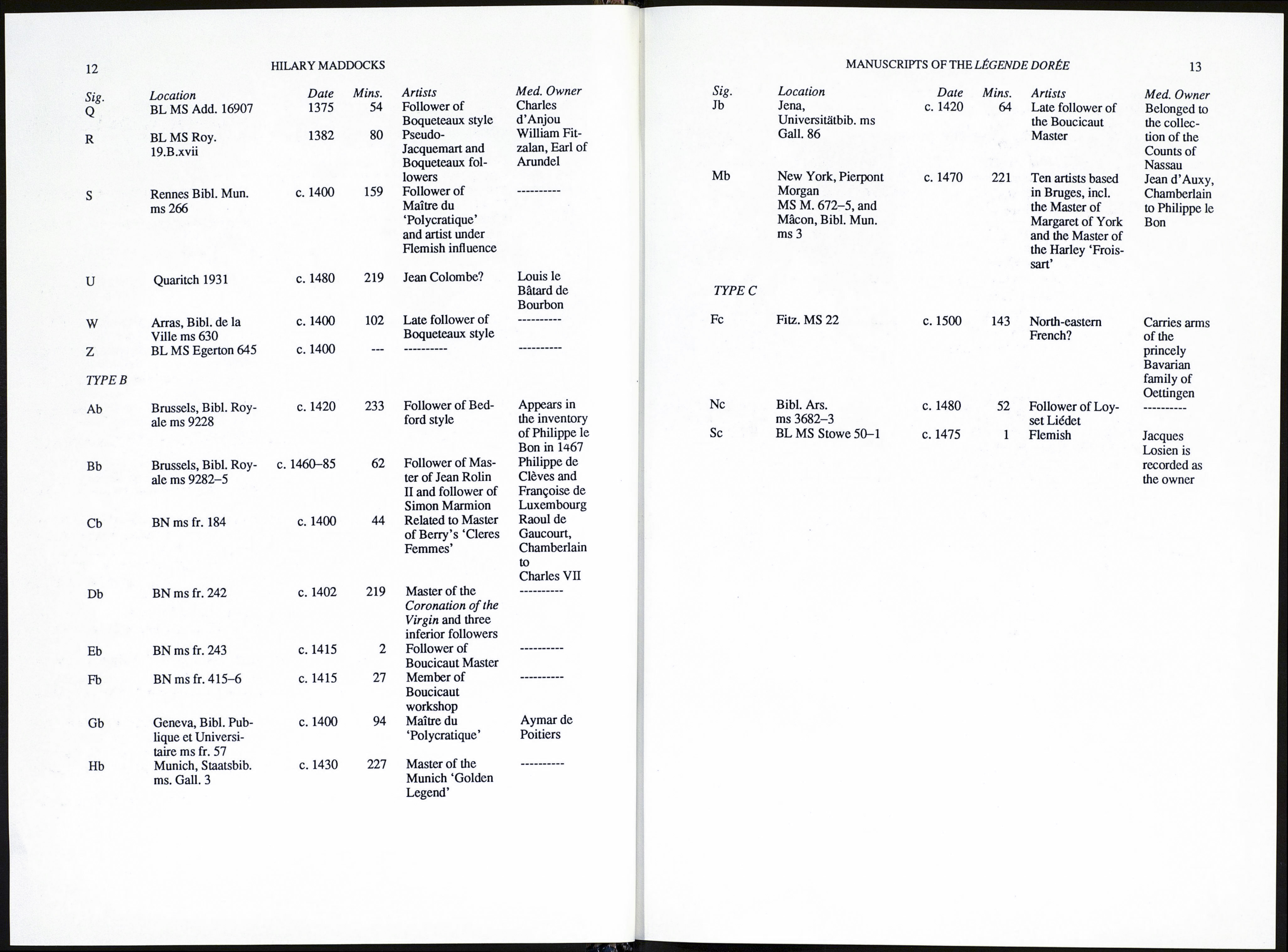 The illustration of the manuscripts of the Légende dorée suggests that the text
was perceived by the late medieval owners as lying somewhere between an aid to
pious devotion and a repository of entertaining narratives. There is an interest in the
story-telling potential of the text, reflected in sometimes quite complex pictorial nar¬
ratives of a sort which do not usually appear in traditional devotional books. While
the manuscripts most closely resemble the expensive, illuminated, vernacular
romances and histories popular with the French aristocracy in the fourteenth and
fifteenth centuries, and were often illuminated by the same artists, there is a marked
respect for hagiographical pictorial traditions.30

In response to Sherry Reames’ notion that the Legenda aurea was not a very
suitable text for translation several comments can now be made about Jean de
Vignay’s Legende dorée. Reames expected that the responses, negative and posi¬
tive, of the readers of vernacular manuscripts would be expressed in the form of
marginal comments and glosses. She also expected that translators would have
made significant changes to the text, in an effort to make the work more accessible
to ‘relatively unsophisticated readers’.31 In fact, de Vignay’s very faithful translation
was preferred to freer versions, and judging by the lack of marginal remarks or
corrections, the readers were quite accepting of the contents. Most manuscripts are
surprisingly clean, which leads one to wonder how frequently and attentively they
were read, particularly given the density of parts of the text.

Certainly to some extent these expensive picture books illuminated by fashion¬
able artists were regarded as aristocratic accessories. They were probably referred to
on particular feast days, and the pictures admired, but it is unlikely that these
manuscripts were critically studied with the same attention devoted to manuscripts
of the Legenda aurea. The success of the de Vignay translation above others lies in
its claim to authenticity. The work had received the approval of a queen and it was,
as de Vignay took care to note, taken from the Latin, which gave it the added author¬
ity of the language of Scripture. The ‘seriousness’ of the text is also reflected in the
manuscripts, where the artists maintained several forms of traditional hagiographie
representation. The authority and importance given to the Legenda aurea by the
Church in the thirteenth century was inherited by the close de Vignay translation, but
the source manuals used by preachers to proclaim the pre-eminence of the Church
had, in the form of elegant picture books, successfully evolved into statements of lay
power and prestige.32

30 Possibly another symptom of this respect is the absence of representations of owners accom¬
panied by their favourite saint and of emphases given to saints with special significance for the owner.
Of course, this could also be the result of mass-production of manuscripts; instead of the manuscript
being a special commission, the owner may have had his arms and initials inserted after purchasing the
completed work.

32 This paper is based on research undertaken as part of work towards a Ph.D. from the University
of Melbourne, which was supervised by Margaret Manion and Vida Russell. The thesis is a study of il¬
lumination in the manuscripts of Jean de Vignay’s translation of the Légende dorée.

MANUSCRIPTS OF THE LÉGENDE DORÉE 11

The Virgil Mas¬
ter and the
Medallion Master

33 See note 13 above for a description of the subdivisions in this table. On a few occasions the for¬
matting programme used here has hyphenated words unconventionally.