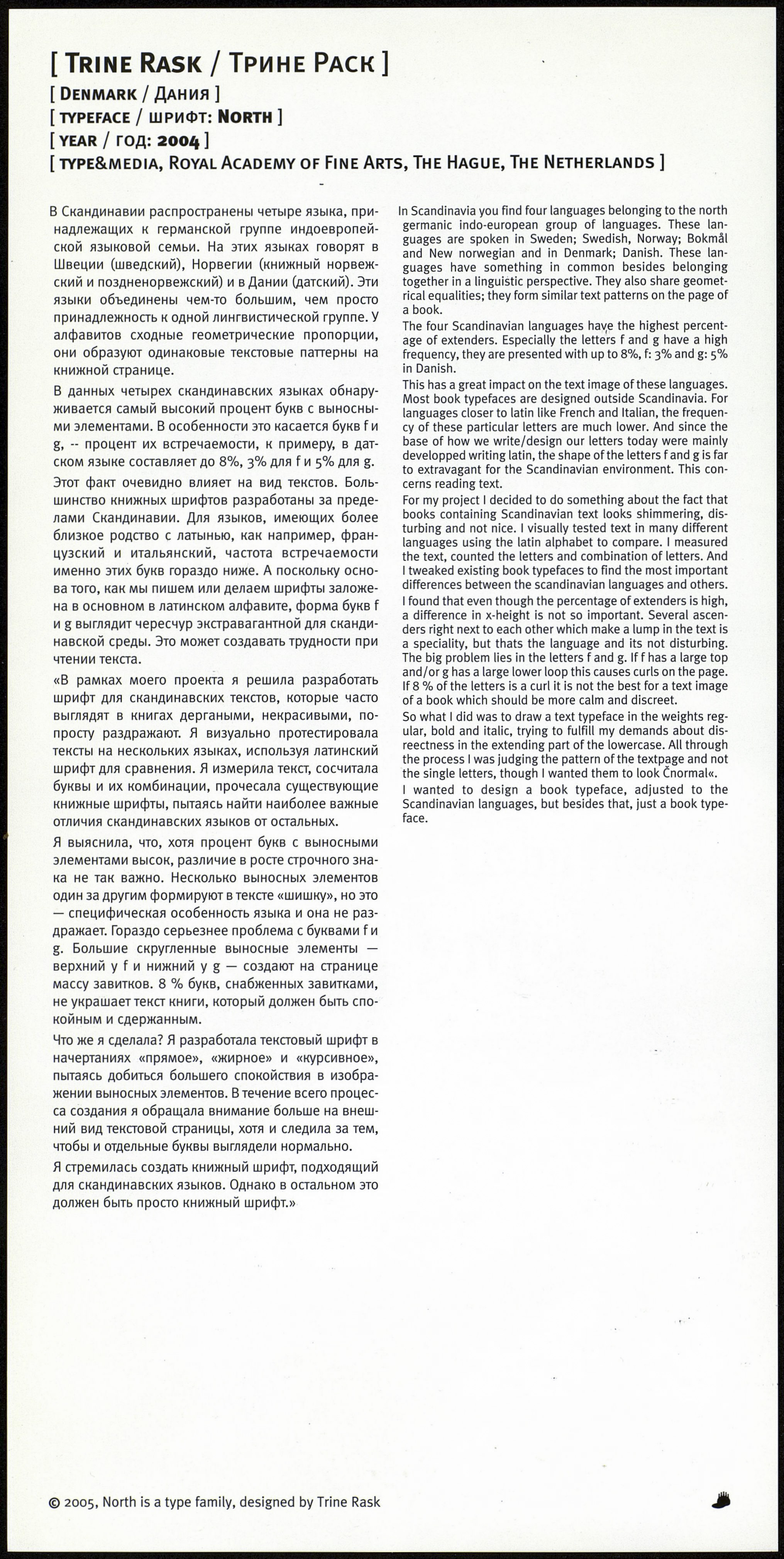 In Scandinavia you find four languages belonging to the north germanio
group of languages. These languages are spoken in Sweden; Swedish, Norway; Bokmâl
and New Norwegian and in Denmark; Danish. These languages have something in com
mon besides belonging together in a linguistic perspective. They also share geometrical
equalities; they form similar text patterns on the page of a book. The four Scandinavian
languages have the highest percentage of extenders. Especially the letters f and g have a
high frequency, they are presented with up to 8%, f: 3% and g: 5% in Danish. This has a
great impact on the text image of these languages. Most book typefaces are designed out
side Scandinavia. For languages closer to latin like French and Italian, the frequency of these
particular letters are much lower. And since the base of how we write/design our letters today

looking at the language

and decipher the pattern of the text

were mainly developped writing latin, the shape of the letters f and g is far to extravagant for the Scandinavian
environment. This concerns reading text. For my project I decided to do something about the fact that books
containing Scandinavian text looks shimmering, disturbing and not nice. I visually tested text in many different
languages using the latin alphabet to compare. I measured the text, counted the letters and combination of
letters. And I tweaked existing book typefaces to find the most important differences between the Scandinavian
languages and others. I found that even though the percentage of extenders is high, a difference in x-height is not
so important. Several ascenders right next to each other which make a lump in the text is a speciality, but thats the
language and its not disturbing. The big problem lies in the letters f and g. If f has a large top and/or g has a large
lower loop this causes curls on the page. If 8 % of the letters is a curl it is not the best for a text image of a book which
should be more calm and discreet. So what I did was to draw a text typeface in the weights regular, bold and italic,
trying to fulfill my demands about disreectness in the extending part of the lowercase. All through the process
I was judging the pattern of the textpage and not the single letters, though I wanted them to look »normal«. I
wanted to design a book typeface, adjusted to the Scandinavian languages, but besides that, just a book typeface.