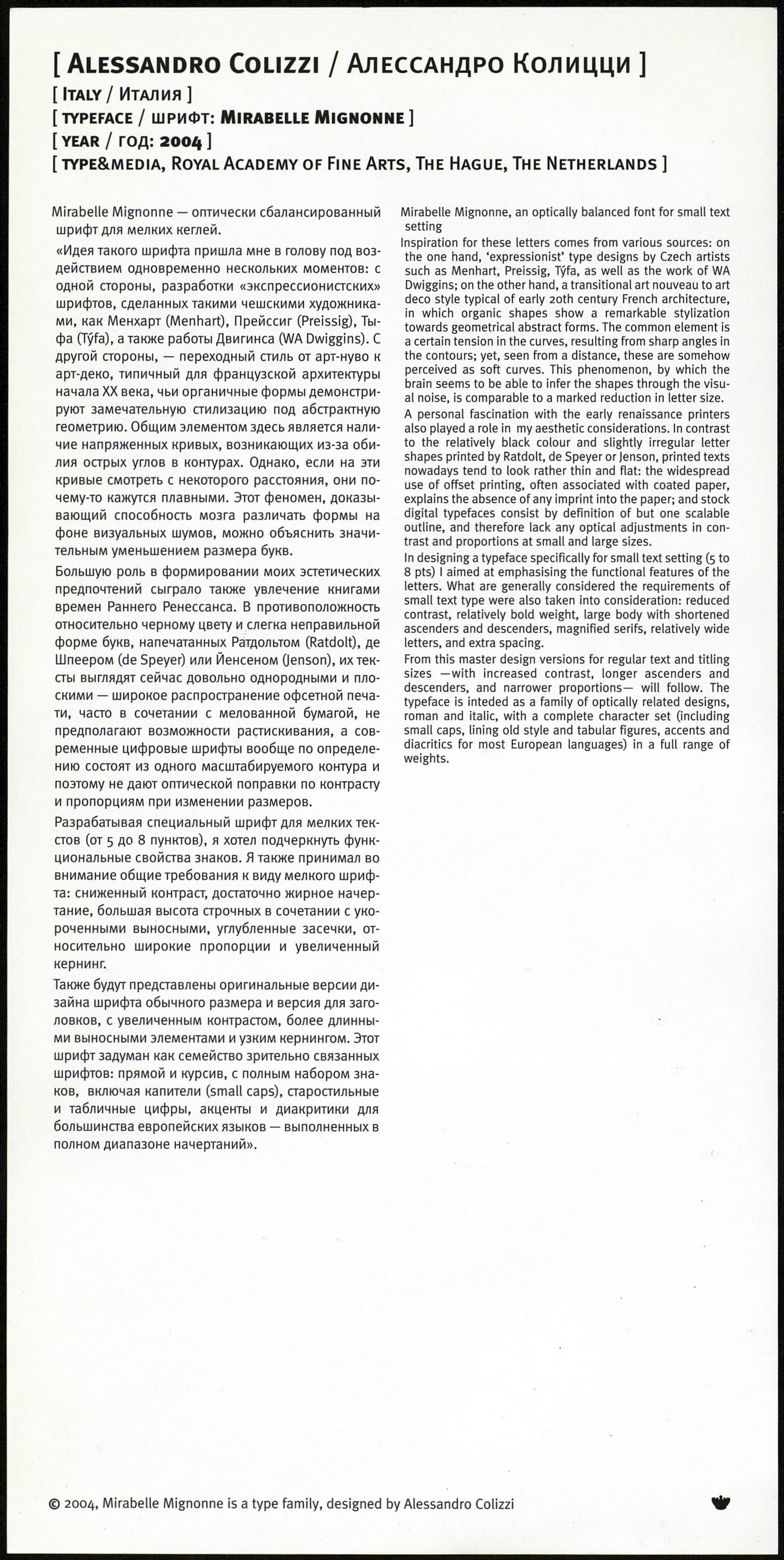 Inspiration Гог
these letters
comes from vari¬
ous sources, but
they were defi¬
nitely bom in France, hence the
name. During my research period
at the ANRT In France in aooi, I
discovered some ‘expressionist’
typefaces designed by the Czech
designers Oldfich Menhart and
Vojtëch Preisslg in the 1920's and
1930's; I also found some more
recent designs by Josef Tÿfa and
Albert Kapr, much in the same
line. 1 At the same time in build¬
ings around Nancy, Metz and
Strasbourg I could observe a pecu¬
liar'transitional' style from art
nouveau to art deco, in which
organic shapes are still evident,
but whose treatment shows a
remarkable stylization towards
more geometrical forms - espe¬
cially in balconies, railings,
doors. In a sense, there seemed
to be some sort of convergence
with the tension in the curves of
the expressionist type designs.

4 A further source of inspiration
was the work of William Addison
Dwigglns, in particular his ration¬
ale for the Electra and Caledonia
typefaces, In which the tension
between the outer and inner con¬
tours is a strong element. 1 At that
time, however, sketching outlines
proved to be frustrating. With¬
out a proper understanding and
control of the letter shape, draw¬
ing a clear line between black and
white, between foreground and
background, is a wild guess. Trac¬
ing and altering the same letter
over and over again on translu¬
cent paper proved a long, pains¬
taking trial-and-error process.

I attempted a number of differ¬
ent solutions to try to blend that
dynamic feel of the stroke with
various models, but none was
really satisfying. Only after being
exposed toCerrit Noordzij's the¬
ories, equipped with the basic
notions of contrast and construc¬
tion and his sketching technique,

I was at last able to resume work.

Any piece of
A problem design usually
DEFINITION benefits from

having a number .
of limitations that
set the rules of the game for the
brain to work out solutions on the
board. Although a new design is
In the first place bom out of the
designer’s pleasure to draw letter
forms, it can nonetheless ben¬
efit from a rational framework
applied at the onset. Focussing
on a specific problem helps the
designer in making choices, or
‘straightening up' the design. 4
My revived design project needed
a problem to address in order to
find Its raison d'ítre. The idea of
a certain tension in the curves
resulting from sharp angles in the
contours-as if roughly cut out of
metal-was still an essential fea¬
ture. A personal fascination with
the Renaissance and the early

A typeface especially designed for

1 Designed by Alessandro Colizzi in partial fulfilment of the Type Medi a
Postgraduate Programme at the Royal Academy of An, The Hague 2004

o achieve on paper the best tapering ends - through a combi-

humanist printers also plays a role letter form they could; and would nation of taut curves and sharp

in my aesthetic considerations: therefore go as far as to alter the angles. In doing so, what are gen-

lenson, and the slightly irregu- in relation to the type size, the

lar shape of their printed letters paper, the ink, the press - Harry

have, for some reasons, a strong Carter rightly suggests that this

appeal to my taste. The next logi- had probably more to do with ca¬
cai step was to consider If and how ing than with cutting. 1 But where strong serifs, relatively wide let-

these typographic preferences is the link bridging my aesthetic ters, extra spacing. 11 am well

make any sense today. Is there preference for organic shapes and aware this approach has been

room for yet another historical that 'mechanical' tension between tried before, of course. Over the

revival ? Or should this fascination inner and outer curves with the

be indirectly translated into con- craftsmanship of the early Ren-

present-day printing techniques? ers? Once again, the work of Unger, among others) or worked

1 Printed texts nowadays tend to W. A. Dwiggins proves to be a true along the same line arriving at

look rather grey, thin, flat, in other source of inspiration, with his ‘M- similar solutions, that is the same

words visually weak and monoto- formula,' as he termed hisbril-

nous. There are some obvious rea- liant invention. In cutting mario-

sons for such loss of visual Inter¬
est: the widespread use of offset
printing explains the absence of

The design, so
working to speak, started
the way UP off theother way
round, from let-

mcnts of small type must also be ters optically

ers and descenders, magnified master design. An early stage of

research involved the examina¬
tion of details of letters in text
samples from old incunabula. The
aim was two-fold: to try to infer
the average letter form from the
ones reproduced in printing and
to make a non-systematic over¬
view of the variations produced

by those early punchcutters. Basi¬
cally I was looking out for solu¬
tions as regards funaional fea¬
tures: 1 made lots of sketches, both
to document the research and
to practice drawing. At the same
time I studied closely the small
type sizes cut by Fournier, In par¬
ticular the variations in propor¬
tions and construaion for a given

size. Strictly speaking, though,
there were no conclusions, rather
a number of ideas to test while
sketching the typeface. Although
rough sketches had been piling up
in my notebook for months, fine-
tuning the basic letter shapes took
some time: quite often a seem¬
ingly Interesting gimmick proved
disappointing when reduced. A
considerable amount of time and
effort went into a long series of
corrections. Little by little I ended
up altering or removing altogether
a number of details that, how¬
ever intriguing at drawing size
(approx. 10 cm), at the actual size
would either cause distortions or
be simply redundant for the reso¬
lution. It can be said that the let¬
ters now look more 'normal.' And
more details are likely to go as
well. Such deuils will somehow
regain the stage in the regular text
and display versions, which will
also feature increased contrast,
longer ascenders and descend¬
ers and rounder, narrower pro¬
portions. The typeface Is in faa
intended as a family of optically
related designs, rbman and italic,
with a complete character set
(including small caps, lining, old
style and ubular figures, as well
as accents and diacritics for most
European languages) and a full
range of weights. It's necessarily
a work in progress; there is still a
lot of work to do before the prod¬
uct can be rightly termed a type¬
face. And there is still ample room
for experimenting, for Instance
with the shape of the serifs, which
can have a dramatic effect on the
image of the letters. Also the iulic
is underway at the moment.

4 A few words also on my working
method: I usually prefer to sketch
on paper first (approx. s cm, a size
at which my hand feels comfort¬
able); I then make an enlargement
from which I make (most of the
time) finished drawings to scan
and digitize, although lots of cor¬
rections happen on the screen
(or again on paper and then on
the screen again). 11t's difficult
to judge one’s own work from too
short a critical distance. Time
will hopefully bring more insight
There are letters I like and others
which I am not fully convinced
of. Some deuils need reworking,
other redesign probably. Print¬
ing the specimen on a letterpress
using polymer plates was a neces¬
sary test. It highlights for insunce
the need for some corrections in
the joins between the stem and
the arch (in such letters as n, m,
h). I would say, this document is
a first evaluation of an ongoing
project (to be continued).

any imprint into the paper; this
printing technique is often asso- for puppets with his love for type,

ciated with coated paper, which he understood that this phenom-

reinforccs the perceived flatness cnon Is comparable to a marked

of the page; and thirdly, stock dig- reduction in letter size, liking a

ital typefaces consist by defini¬
tion of but one scalable outline, the optical principle behind this

ments in contrast and propor- type size must also be involved

tions at small and large sizes. This in the distortions with which the

simple fact provides a stimulating early printers were faced. The

kind of tension in the curves: Men¬
hart, Preissig and other expres-
nette heads in wood he discovered slonist designers in the 1930’s and
that sharp cut planes seen from a 1940's; Carl Dair (Cartier, ca. 196s,

distance are somehow perceived completed and digitised by Rod

as soft curves. Combining his love McDonald, 2001); more recently,
Fred Smeijers (Quadraat, 1991),
Cyrus HIghsmith (Prensa, 2001),
Peter Bil'ak (Fedra, 2000) or Akira
Kobayashi (Origami). However,
step further, I will go on to say that there is still ample room for vari¬
ation and original designs based
on the same principle. A honest
and structured effort should lead
to Interesting results, no matter
what the point of departure is.

put to test a type design aimed for able, particularly at small size,

printing. 1 It might be objected to interpret and read the shapes

that similar complains were despite the 'noise.'

being made about Baskervillc's
books in the early 18th century. In
fact, being aware of how reading
habits evolve alongside other cul¬
tural and social changes, I do not
claim any absolute value for my
views, which I intend as a means
to draw attention to a certain

As a reaction to
A RECIPE the faintness of

struction and contrast: Dwiggins
himself often started out from
existing types, for either the pro¬
portions or the colour or the feel¬
ing, and then proceeded his own
way. 4 Then, to throw in another
ingredient while looking for a suit-

printed texts, my able model, I found it interesting

proposed solution implied to look to study and compare the varia-

at both the letter forms used by
the early Renaissance punchcut-
phenomcnon. I am not saying that ters/printers and the experiments typesize, particularly in the small

these blobs or deformations were carried out by Dwiggins on small sizes. The French punchcutter

created on pu rpose to ‘visually type. In both cases we are deal-

cnhance' the letters. Of course, ing with optical adjustments to

had it been only technically fea- enhance the functional features

slble, those early printers would of letters, otherwise put hard to

text as sharp and as neat as pos- the small scale. Basically, I aim at and 'quadrature' (substitution of a

sible. Given the limited technical emphasising the functional fea- flat serif for one making a curve at

possibilities of their time, though, tures of the letters-serifs, bulbs, its junaion with the stem),

they endeavoured in my opin- notches at the junction of strokes,

tions and adjustments made by
Pierre-Simon Fournier for a given

they endeavoured in my opin- notches at the junction of strokes,