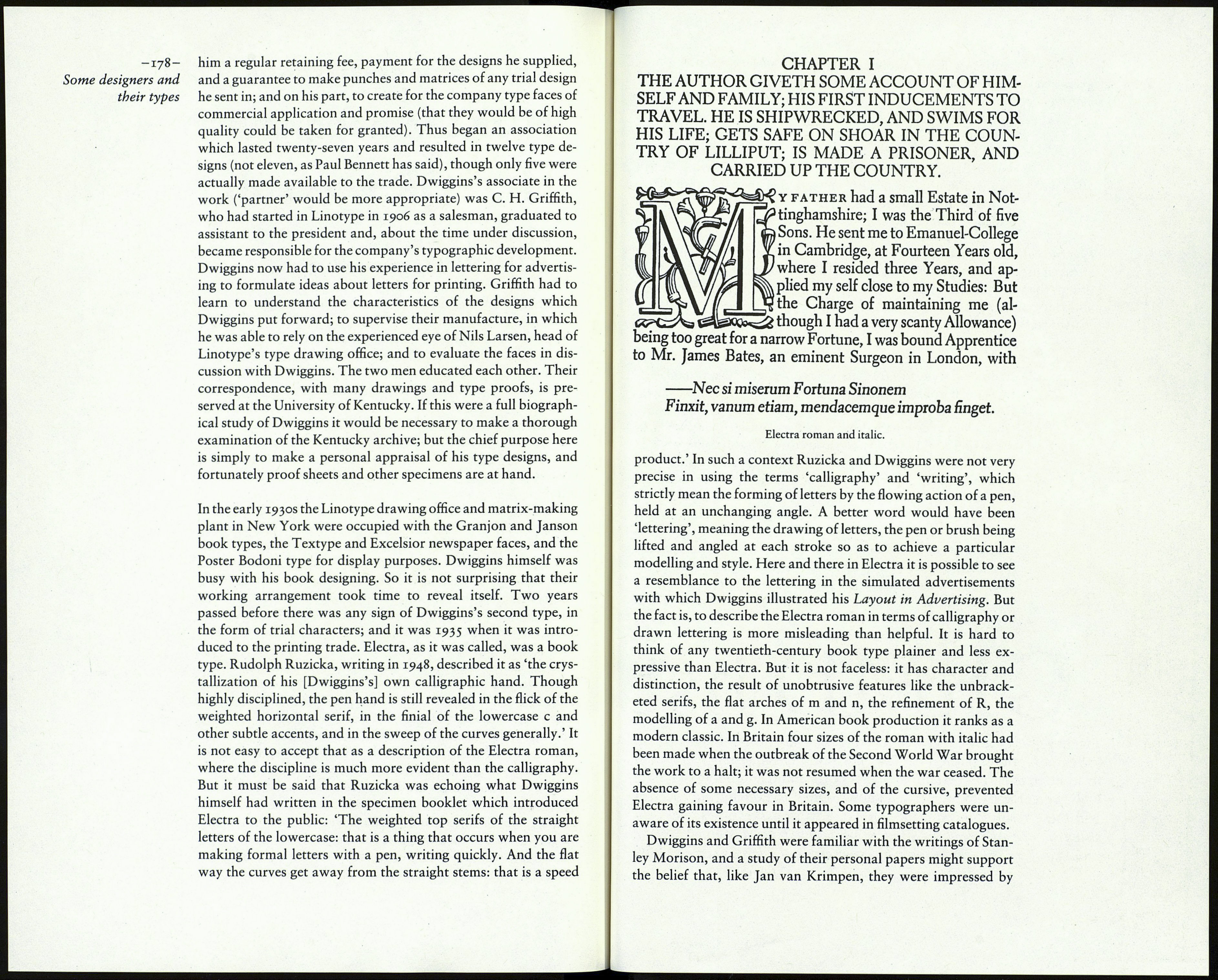 -176- range of decorative borders for Linotype. And he made use of
Some designers and stencils - or rather, templets - in his type designing, as we shall
their types see.

The wording on the title opening of The Time Machine was
not typeset but hand drawn; not really calligraphic, though part
of it is in a light script. The title and the name of the author,
designer and publisher are in a careful representation of typo¬
graphic letter forms. Beatrice Warde was perceptive when she
wrote, 'Mr W. A. Dwiggins has not yet published a type design;
yet his talent is above all typographic . . .' Although the quality
of his work as illustrator, book designer and decorator is a matter
for argument there need be no doubt about the standing of his
type designs.

Curiously, his first commission was not a book type, but some¬
thing quite different. In his Layout in Advertising, published in
1928, he had expressed a need for a better sans-serif type. 'Gothic
capitals are indispensible, but there are no good Gothic capitals.
The type founders will do a service to advertising if they will
provide a Gothic of good design.' A member of Linotype's staff in
New York read this and invited Dwiggins to design such a type.
(No doubt the Linotype people had already become aware of the
Erbar, Futura and Kabel types imported from Germany, had
recognised their own need for a modern sans-serif, and were
looking around for a designer.)

When Dwiggins's attention was drawn to some of the new
European sans-serif faces he conceded that the capitals were
good but thought the lowercase could be better. It was into the
lowercase of his own design that he put particular effort and
introduced some unusual features. It looks as though he and the
manufacturers were thinking of the new type as a display face, or
for use in short paragraphs of advertising copy, and not as a text
type for general use, because the face which Dwiggins actually
drew himself was the bold type, known as Metroblack. It was
issued to the public in 1929.

The capitals are a plain well-balanced set of letters, nearer
to the style of the Gill sans-serif than to the German faces. The
lowercase too, like Gill's design, is suggestive of traditional letter
forms rather than the 'new' geometric ones. The ascenders and
descenders, except y, are sheared at an angle - a good device, I
think, for 'humanising' the overall effect (see the chapter on
Rudolf Koch for his use of the same device.) The a, e and g have a
distinct variation in stroke thickness; it is more acceptable in the
a than in the other two letters, where the thin parts have an
unsettling effect on words. The most unnatural letters are f, t and
j, which are cropped at head or foot, so that they look as though
they have suffered damage in casting. Those defects in the bold
lowercase are not nearly so obvious in the light version, called
Metrolite, which was designed by Linotype but supervised by

Metroblack and its alternative characters.

Dwiggins. That applies to Metromedium, too. Taking the three
weights together, the widths of the characters are noticeably at
variance. In the bold, the foundation design, the width is normal.
The light face is wide, because its characters had to fit to the
widths of the bold characters with which they were duplexed.
The sprawling appearance of the light face probably troubled the
Linotype design people, because in the medium weight they
reduced the width — and rather over-did it. There was a fourth
version, Metrothin, available in the United States but not in
Britain.

Not long after the Metro faces were introduced it was evi¬
dently decided that they would gain extra favour if they could be
given some of the distinctive characteristics of the German sans-
serif types which were taking the eye of American printers and
their customers. Alternative versions of seven capitals were
designed (the W in two forms), five lowercase letters (the Jenson e
was later discarded), and three punctuations. These 'No. 2'
forms are the ones that are supplied in the photo-composition
fonts of the Metro faces.

In the United States Metro lost much of its popularity when
Futura became available for slug composition by Intertype and,
under the name Spartan, by Linotype. For over forty years
Metroblack and Metrolite have been used by British newspapers
for intros and crossheads, and have continued in use even though
other sans-serif types are available. There are certainly better
sans-serif types than Metroblack and its companions (and some
much worse); but though the design can hardly stand with other
types of its time - the work of Erbar, Renner and Koch in
Germany and Gill in England - it does have a degree of originality
which, from a first-time designer, deserves respect.

Linotype were sufficiently impressed with the type, and with
Dwiggins himself, to offer him a contract: on their side, to pay