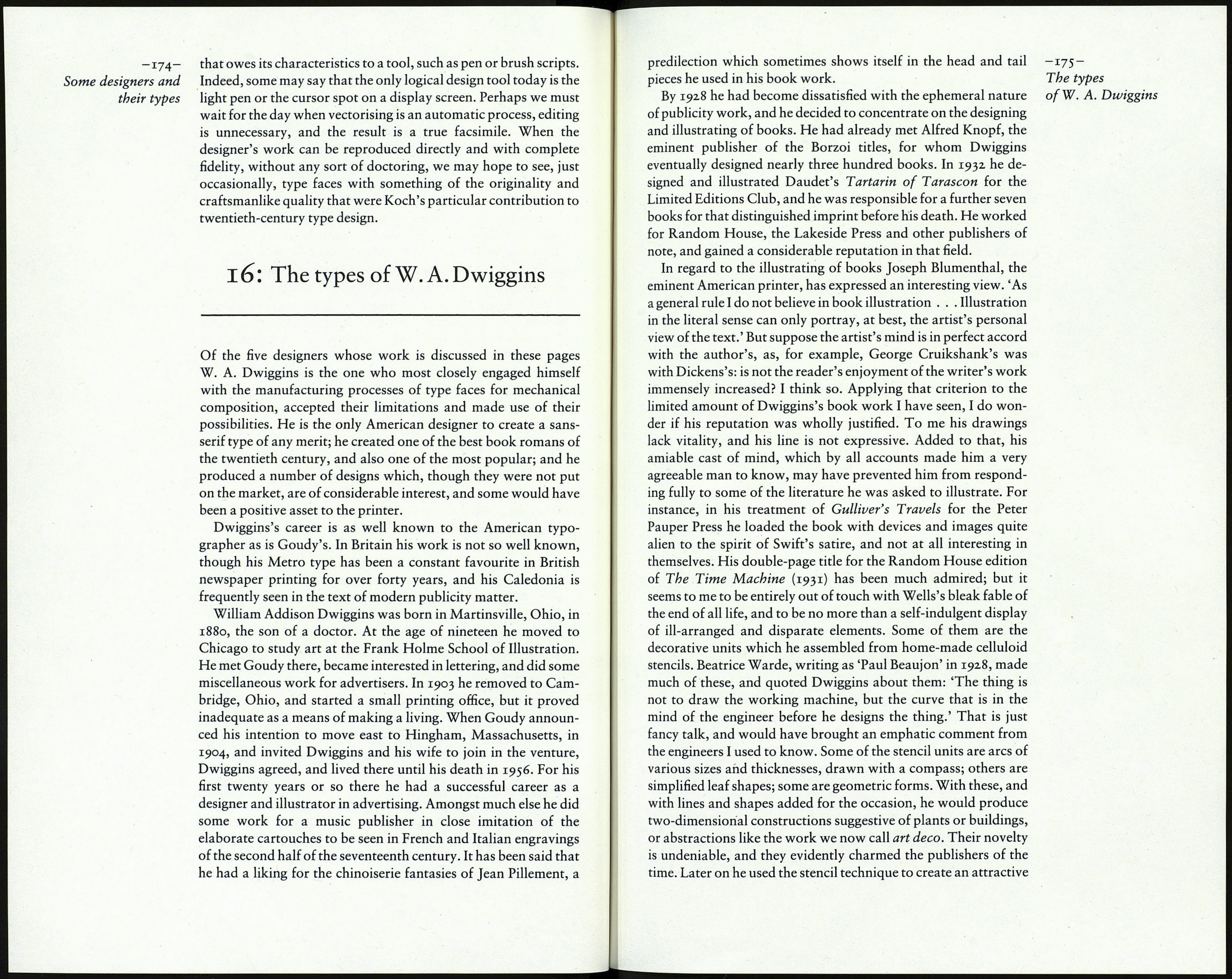 chamfered horizontals, but all other strokes have squared-off
terminals. No doubt the designer realised without hesitation that
to shear such heavy strokes at an angle, however slightly, would
produce an undesirable restlessness in the face. (The types under
scrutiny here are, of course, the ones created by Koch and issued
by Klingspor in 1929, not the modern American travesty of them,
which should in decency have been given another name.)

In its early days Kabel was much admired. Harry Carter spoke
of it as 'almost as good as Johnston's sans, and is thought by
many to be better'. However, Futura must have been a formid¬
able rival for the printer's favour, and Klingspor evidently deci¬
ded that some of the idiosyncracies of Kabel were an obstacle to
its commercial success. So an alternative version of the letters W,
a, e and g, and an uncrossed 7 for the light and medium, were
See previous page. offered under the name 'Neu-Kabel'. I do not see much value in
them. In a type as stylish as Kabel the cross-over W should have
been acceptable, though the alternative plain version would have
been advisable in the sizes below 10 point. The original a (but
with the long top) is more legible than the round form. Koch's
original g is more expressive than the alternative, though it
would have been better with a larger upper section, as in the
italic. As for the e: though normally averse to the Jenson form,
especially in a sans-serif, because it disturbs the stability of a
word, I think that in Kabel the form contributed to the vitality of
the design. However, if the bar of e had been angled at about 15
degrees instead of 32 the vivacity of the type would not have
suffered and the rhythm of the letters would have been improved.
The condensed versions of Kabel were not outstanding; and
the shaded, called Zeppelin in Germany, was an awkward

mixture of effects. The really interesting and attractive decor- -17З-
ative version of Kabel is Prisma. It is not, as might be thought, Three types
merely the capitals of the heavy face with their strokes engraved, by Rudolf Koch
but a revised and regulated version (note the E, R and M) with an
ingenious system of corrugation. The large sizes had five black
lines to the stroke; but the smaller sizes had four lines, to main¬
tain the 'colour' and to prevent filling-in - a practical refinement
not likely to be offered in modern filmsetting versions of the face.

The three types that have been studied here are the most person¬
al, the most independent from previous models, of any discussed
in this book. In all three the letter shapes are distinctive and
distinguished, the work of a refined and inventive mind; and in
two of them, the Koch-Antiqua, especially the bold version, and
the Neuland type, the hand-cut edges of the letters create a keen-
featured appearance which is in refreshing contrast to the regular
and impassive profiles of the majority of type faces. And that sets
up a train of thought.

Suppose an accomplished and sensitive designer, dispirited by
the deadening effect of the total accuracy of present-day photo¬
graphic methods of type manufacture, recognises the spirit which
animated Koch and decides to adapt to modern materials and
tools the method he used in the creation of Neuland. He sketches
a set of characters on paper, directly and freely but with enough
care to establish a coherent style and a decent balance in the
proportions of the letters one with another. He does not then
make a highly finished drawing of each letter, as is commonly
done, but cuts the characters directly in a laminate masking film -
these 'friskets' to be used for the making of the master font.
Without straining to make all the strokes exactly equal in weight
and the serifs identical in shape, he allows the hand and blade to
make their natural effects on the contours of the letters, while
firmly resisting the temptation to produce a 'hand-carved' effect.
If in the final printed result the letter shapes are natural, the type
is thoroughly readable, and the method of creation is unob¬
trusive, we might applaud the designer for restoring to type
something of the human quality that Updike and Van Krimpen
thought had been mechanised out of existence. It might be
objected, though, that the notion is only feasible in a system
employing simple characters-on-film fonts and through-the-lens
output, where the designer's work would be quite unaffected by
the manufacturing process, whereas in the modern method of
producing type faces by digitising and editing, the free-hand
characteristics of the design would be so tampered with as to
nullify the hoped-for effect. Not only that. It might be regarded as
an aesthetic solecism to create a set of letters by such a craft-like
method only to have them re-constituted as vectorised outlines -
a criticism that, if valid, would preclude the designing of any type