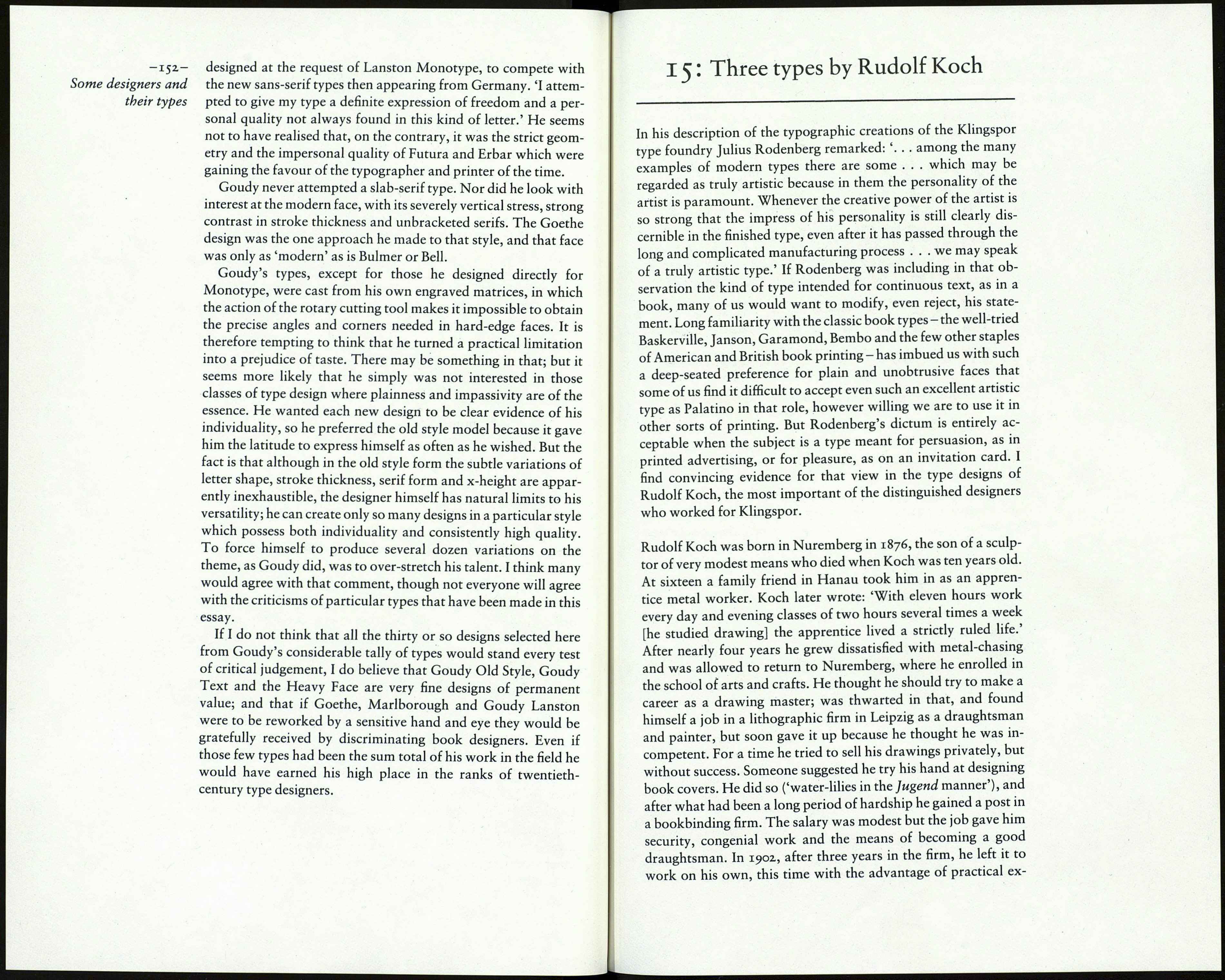 with the Ptolemy type. It has unusual characteristics of its own:
the tail of Q, the calligraphic Z and z, and the angled top of 5.
They do not enhance the design. Goudy wrote that he drew the
eighty characters in the font, cut the patterns, engraved the
matrices and cast the type, in sixteen working days. Energy and
determination to be admired; but there cannot have been much
time for the objective scrutiny which every design should under¬
go before it is allowed to emerge from the workshop.

Everyone knows what printing is ; the simple inking
of types that have been carefully arranged, properly
impressing them on paper, and the thing is done. Sim'

The type that is now known as Californian was at first called
University of California Old Style. It was a commission from the
university for a private type for the university's own press.
Goudy worked on it in December 1938; but with only a week to
go before he was due to submit a proof he decided he must start
again. A new design was put through the engraving process and
type cast and proofed in time for the visit by Goudy's university
patron. The design is not particularly notable, but it is pleasant
enough to read at 12 point and smaller. The 10 point captions
in the 1952 edition of Goudy's The Alphabet and Elements of
Lettering are more agreeable than the 18 point text. In the larger
sizes some peculiarities show themselves: C, E, F and T look
unfinished, s is too light, and in the italic the ball terminals in S are
at odds with the other capitals, though they are acceptable in the
lowercase s. The face has recently been re-drawn for filmsetting
and named Berkeley Old Style.

"The Story of St. Francis (Frank Morris), St. Gonsol (Dr. Frank
Gunsaulus) and the Devil (himself and no other) is a quaint and
delightful bit of bookish foolery written years ago by Eugene
Field; when and where it first appeared the present printers
of it are not aware. It was printed in nineteen hundred and
two by Frederick Thompson in New York City, and it is on

In his writings Goudy set down his views on the nature of letters
and the duty of the type designer, and what he wrote contains no
pretensions and argues no claim for the expression of the
designer's personal fancies. Thus, in his introduction' to
McMurtrie's survey of American Type Design (1924): 'Letters
. . . are not shapes made to display the skill of their designer; they
are forms fashioned solely to help the reader' - a thoroughly
orthodox view, and clearly implying that self-effacement is the
designer's chief duty. Goudy the designer, though, seemed to
think along different lines from Goudy the writer. Instead of
consciously acknowledging the discipline of self-criticism he
seemed willing to be driven by his ambition to add yet one more
design to the record; willing, too, to believe that quantity is not
the enemy of quality. And yet there are areas of design into which
he hardly ventured. For instance, he had nò liking for hard-edge
faces. In The Alphabet and Elements of Lettering he wrote dis¬
paragingly of the sans-serif form. His only efforts in that style
were his Lining Gothic of 1921 and the Sans-serif Heavy and
Light of 1929 and 1930. In the Lining Gothic he thought he could
make the form interesting by adding a suggestion of serif 'to take
away the hard and precise ending of the stems'. The result is
much inferior to Berthold Wolpe's fine Albertus type, which ob¬
serves the same principle. The Sans-serif Heavy and Light were