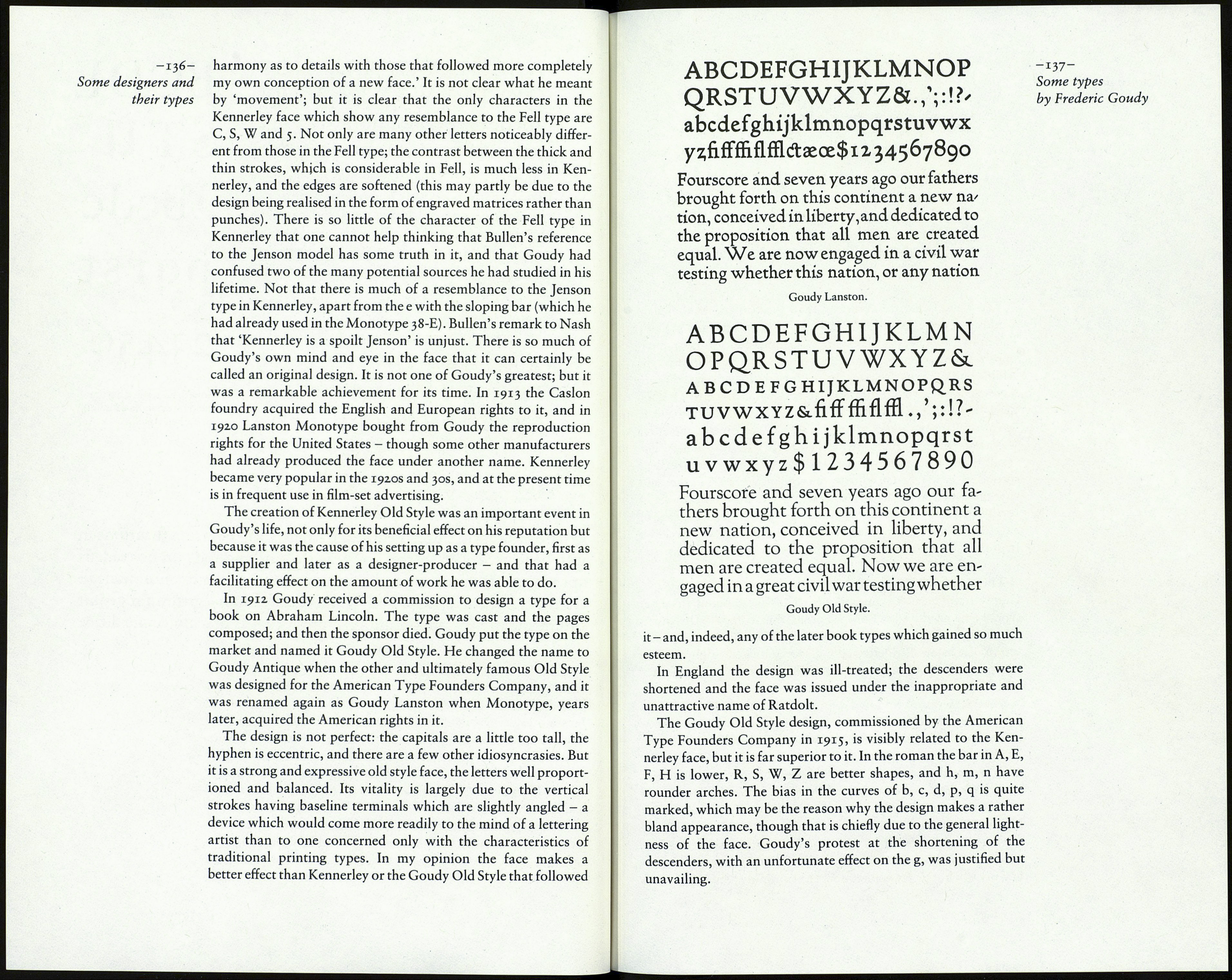 Some designers and record of designs, and a fair number of them deserve comment.

their types The first Village type has been described on an earlier page,

because of its origin as an advertising type. The next text face to

sometimes been called Goudy Old Style or Light. It was designed

Fourscore and seven years ago our fa¬
thers brought forth on this continent
a new nation, conceived in liberty, and
dedicated to the proposition that all
men are created equal. Now we are
engaged in a great civil war testing

Fourscore and seven years ago our fa¬
thers brought forth on this continent a
new nation, conceived in liberty, and

in 1908, at the request of a magazine house which backed out of
the project. It is an undistinguished design, but it does show that
Goudy's studies of the work of the private presses and of text
printing generally had had their effect. He now understood the
essential difference between a piece of lettering drawn for a
specific context and an alphabet whose twenty-six components
would be used in an infinity of combinations.

In 1911 the roman of the celebrated Kennerley Old Style made
its appearance (the italic was not designed until seven years
later). The event which brought the type into being has already
been described. There are conflicting accounts of the source of
the design. Writing to John Henry Nash in 1930, Henry L. Bullen

Fourscore and seven years ago our fathers
brought forth on this continent a new na/
tion, conceived in liberty, and dedicated to
the proposition that all men are created
equal. We are now engaged in a civil war
testing whether this nation, or any nation

Fourscore and seven years ago our fathers
brought forth on this continent a new na'
tion, conceived in liberty, and dedicated to

American Type Design, and the alphabets from Goudy's Half-Century, by courtesy of

of the American Type Founders Company said: 'When he
[Goudy] designed Kennerley he worked from our copy of
Jenson's Eusebius of 1470 . . .'* Goudy's account was quite dif¬
ferent. He said that the source was the canon size of the Fell types
held at Oxford, which Goudy was able to study in a copy of
Horace Hart's Notes on a Century of Typography at the Univers¬
ity Press, Oxford (1900), given to him by Mitchell Kennerley. 'I
had drawn maybe a dozen letters when I noticed a movement in
my own type drawings not shown by the specimen types ... I
went back over the letters already drawn and brought them into
*Quoted by Robert D. Harban in his Chapter Nine, The Typophiles (New
York, 1982).

Some characters from the
canon size (about 48 point)
of the Fell type.