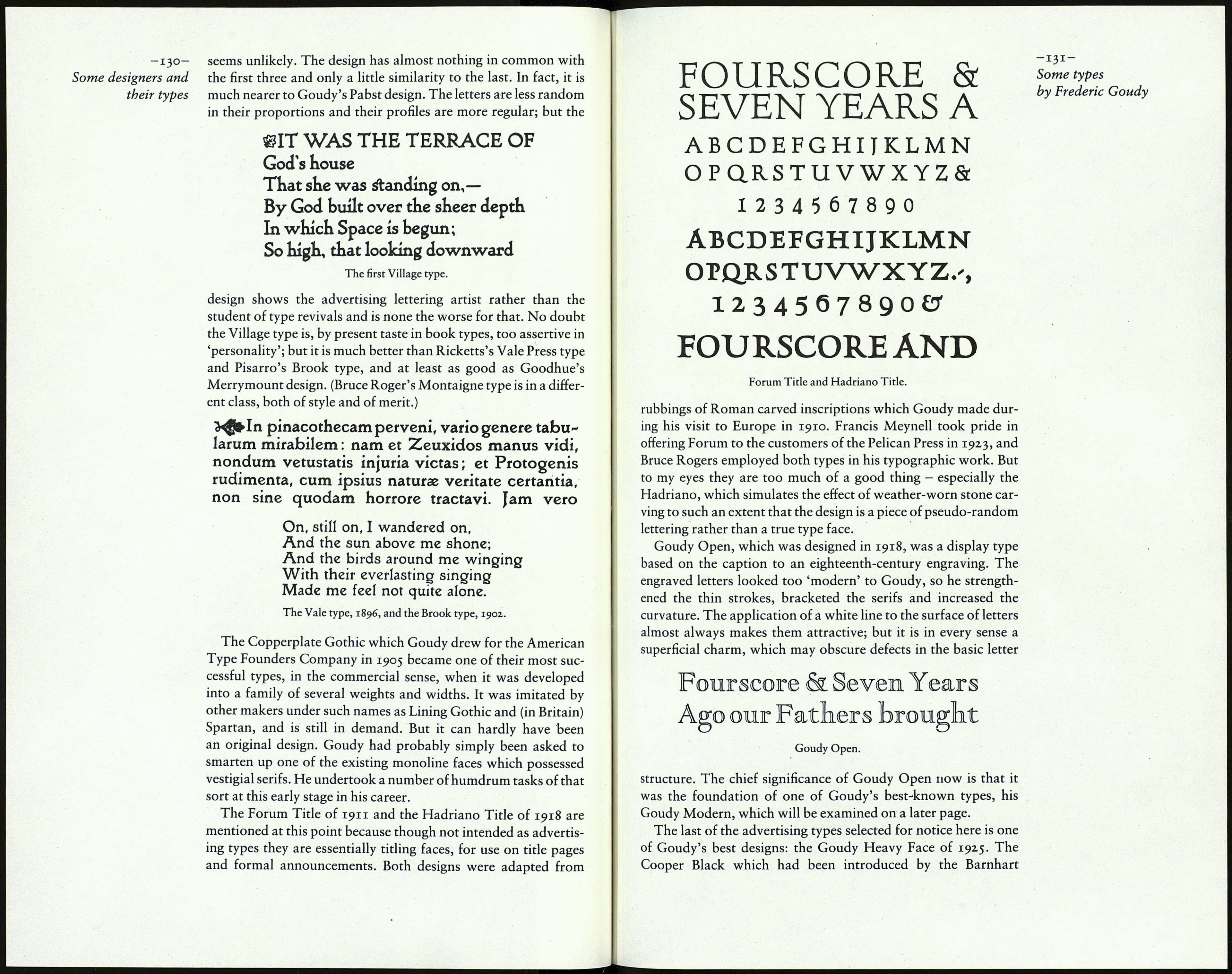 sition of the curves in both faces and the bent and tapered strokes
in some letters in the Saks type suggest an uncritical striving for
novelty and an unwarranted belief that originality, however
achieved, is automatically commendable. That was a trait in
Goudy's character, I think; but when he produced those faces he
was particularly busy and may have had no time for reflection -
which was too frequently the case. Writing about the types many
years later in the Half-Century he may have set down, without re¬
appraisal, what he had thought about the designs at the time of
their creation.

Many different
styles in

The aspect of Goudy's work most frequently remarked upon is
the great number of types he designed: one hundred and twenty-
three, by his own count. It is impossible to avoid the impression
that he did not sufficiently distinguish between quantity and
quality. Howard Coggeshall, who knew him well, wrote: 'About
1930 or 1931 Mr Goudy became distinctly quantity-conscious.
He had made more than seventy designs - now the goal became a
hundred ... So he worked beaverishly. From the beginning of
1930 through 1935 he scored a total of thirty-five designs . . .
a prodigious output.' But '. . . quite a few of them were not
completed designs - work had been performed "sufficient to
give them a work number".'

It is notoriously difficult to classify types precisely. The designs
which are actually reproduced in the Half-Century (some are
only mentioned, either because they were not manufactured or
because the material was lost in the 1939 fire) may for con¬
venience be classed as: advertising text types, six; display types,
thirty; black-letter (that is, those with something of the fraktur or
uncial about them), fourteen; book types, fifty-one; various
(typewriter, Greek, Hebrew, and other special types), nine. The
personal selection that follows is of types that I think are interest¬
ing either for their merits as designs or for what Goudy said about
them.

Of Goudy's types for advertising the first notable design is the
Pabst roman of 1902. Although its origin was in lettering done for
advertisements for the famous brewery after which it is named,
the type was actually commissioned by a Chicago department
store. The design owes more to the lettering mode of the time
than to the conventions of type design. The uneven arches of m,
the different widths of p and q, the 'artless' shapes of a and e, are
quite similar to letters in Will Bradley's advertisements for Ault
&c Wiborg, the printing ink makers, and others. A particular
characteristic of the Pabst type is the height of the lowercase,
which is only about half the height of the capitals. This may have
been the reason why Lucian Bernhard, whose own types had the
same feature, regarded Pabst as one of the best of Goudy's de¬

signs. It is not a distinguished type, but it is a pleasant one. In The -129-
American Chap-Book for November 1904 Will Bradley, its editor Some types
and typographer, showed that as a text type in advertising the by Frederic Goudy
face made a good effect, so long as only a few capitals were
present. It is not surprising that Pabst remained popular in the
United States for many years. Some German foundries adopted
the type in 1912, and called it Ohio. But its prominent capitals can
hardly have made it a good choice for the printed German lang¬
uage, which requires an initial capital for every noun in the text.
(The Pabst Extra Bold, still favoured in British newspapers, is not
related to Goudy's type.)

The italic for Pabst was designed in 1903. So was Powell, a
roman in the same style as Pabst but with a larger lowercase. For
that reason the type is less interesting than Pabst.

Leaving this week
on a long trip into
the African Jungle

Powell, as made by Ludlow.

In that same year, Goudy designed the type which came to be
called the Village type (the first of that name), in which he took
particular pride. It began as a commission for an advertising type
for a clothing firm. They liked the design but thought the cost of
matrices and casting too high, so the drawings were returned to
Goudy. Later that year the design was reworked and produced as
a private type for the Village Press. Writing about it thirty years
later Goudy said he took suggestions 'for my forms-more or less
from the types of Jenson, as exhibited in Morris's Golden type,
the Doves, Montaigne, Merrymount, and types ofthat ilk'. That

PRINTED AT THE DOVES PRESS
No. 15 Upper Mall, Hammersmith, W.
from the Text of The Holy Bible newly-
Translated out of the Originali Tongues
by speciali Commandement of his late
Majestie King James the First, ібп.