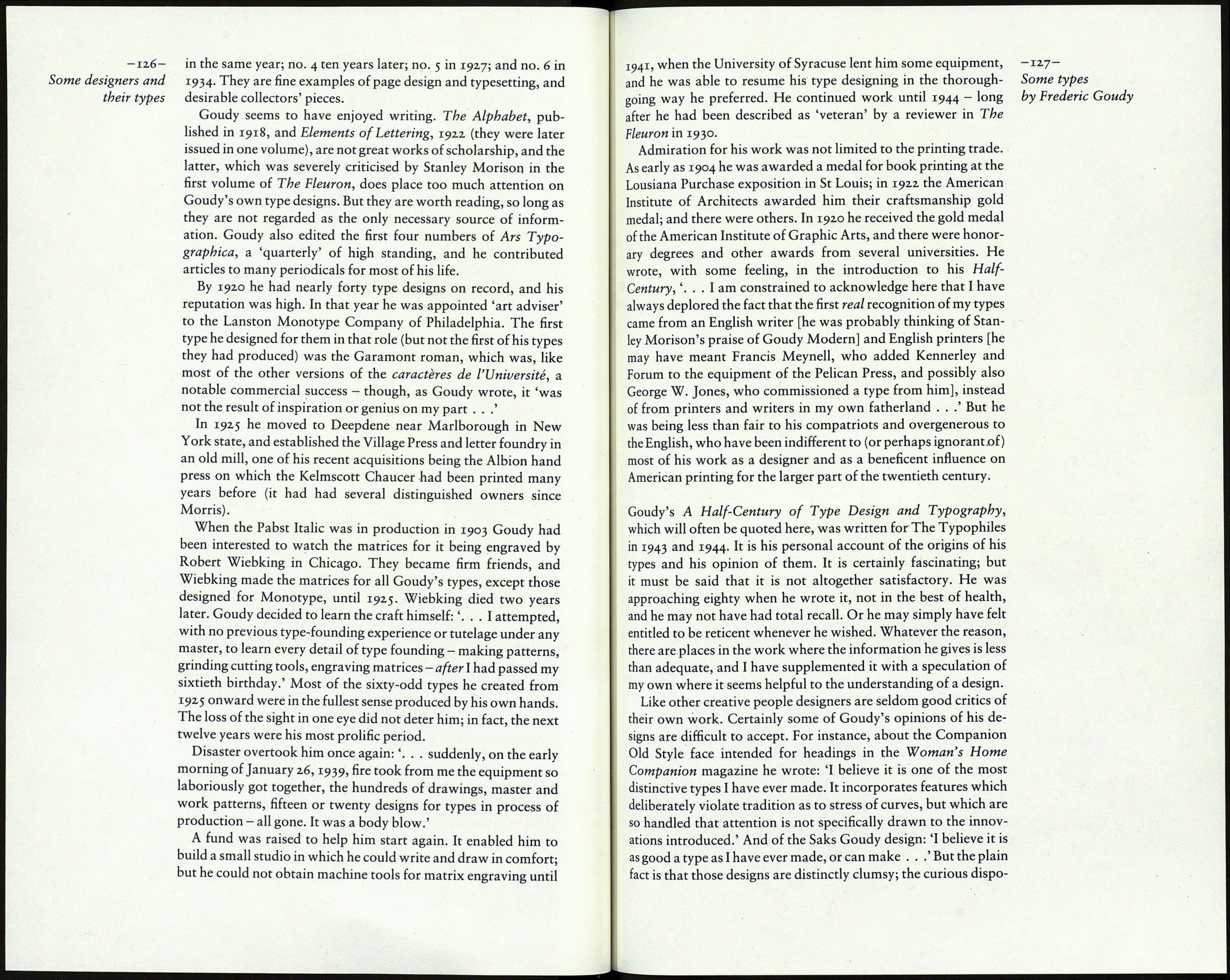 -124- and themes of the art nouveau then fashionable; but it is possible
Some designers and to think that the rough-edged weighty shapes of his Pabst and
their types Powell types owe something to Will Bradley's other enthusiasm -
the 'antique' style of printing practised by, amongst others, Field
ôc Tuer of London, whose American distributors were Scribner
&c Welford. The style, which consisted of an absurd pseudo-
Chaucerian 'englysshe' {Olde Tayles Newelye Relayted and
Enryched with all the Ancyente Embellyshments is a typical title)
composed in Caslon with deliberately crude woodcut decor¬
ations of figures in vaguely Jacobean costume, was popular in the
United States. Perhaps the American at the bustling turn of the
century admired what he took to be a reminder of the days of the
founding fathers and the thirteen states. Bradley adapted the
'antique' style to his own purposes. The first six numbers of the
American Chap-Book he wrote and designed for the American
Type Founders Company in 1904 make much use of his 'quaint'
cuts and old-style typography.

The running of a commercial printing plant was too uncertain
an undertaking (it must have been very competitive: only a few
years before there were over three hundred and sixty printers in
Chicago), or else it was not to Goudy's taste, because after little
more than a year he sold his interest in the plant (it failed a few
months later) and looked around for work. For want of some¬
thing to do he drew an alphabet of capitals and numerals, sent
them to the Dickinson type foundry in Boston, and received ten
dollars, twice as much as he had asked. The foundry added a
lowercase and issued the type as Camelot. It was an undistin¬
guished piece of 'art' lettering with nothing typographic in it; its
only significance is that the acceptance of the design encouraged
Goudy to go on. With advice from Clarence Marder, of the well-
known Marder, Luce type foundry of Chicago, he sold two more
designs (they were never actually made) before he decided that
type designing was no way to earn a living, and took a job as
cashier on a farming magazine in Detroit. One day he drew some
lettering for one of the journal's customers, who criticised the
lowercase. 'His remark put me on my mettle and I began seri¬
ously to study roman letter forms. This was about 1898.' Goudy
was thirty-three.

In the following year he lost his job, returned to Chicago and
decided to try his hand as a freelance designer of lettering and
simple decorative work. He had a modest success, and was in¬
vited to teach lettering and design at the Holme School of Illus¬
tration. 'I had to study harder than any student . . . but I man¬
aged to keep at least one lesson ahead of the class.' W. A. Dwig-
gins, then about twenty, was studying illustration there. He visited
Goudy's class one day and said it opened up a new concept
of design to him.

Goudy developed an interest in books as books, and partic¬

ularly those produced by the English private presses: Kelmscott, -125-

Doves, Vale and Eragny, which he was able to see as they arrived Some types

in the rare book department of the A. C. McClurg book store. by Frederic Goudy

In 1903 he met Will Ransom, then twenty-five and recently
come to Chicago to study at the Art Institute, having previously
served an apprenticeship in a printing office and worked as a
book-keeper. They established the Village Press at Park Ridge,
Illinois, and dedicated it to the making of 'beautiful books of
those things in literature which they enjoy'. Like the proprietors
of the other private presses they admired they equipped them¬
selves with a type of their own, the first Village type. The essay on
'Printing' by William Morris and Emery Walker, published by
them in 1893, was the first title issued by the Village Press. For all
the other books produced by the Press the type was set by
Goudy's wife. (To be married to a wife who can set type is happi¬
ness indeed.)

In 1904 Goudy moved the press to Hingham, Massachusetts.
He stayed there for two years but did not prosper. He then moved
to New York, and made some new business connections 'that
kept body and soul together'. But in January 1908 the office
building in which the Village Press was located was partially
destroyed by fire, and the stock of printed books, work in
progress, drawings, type and equipment were lost. Goudy was
obliged to return to his work as a lettering artist and decorative
designer. By diligence and ability he succeeded well enough to
afford his first visit to Europe in 1909.

His knowledge of good printing impressed Mitchell Kennerley
the publisher, who commissioned Goudy to design an edition of
H.G.Wells's story The Door in the Wall. The trial pages in 18
point Caslon Old Face were disappointing; the capitals looked
too strong for the lowercase and the fitting was too loose. (Bruce
Rogers was to make the same comment about the type in his
report to the Cambridge University Press in 1917.) Goudy offered
to design a new type for the work and have matrices engraved at
his own charge, on the understanding that he could sell fonts of
the type to the general trade to recoup the expense. Kennerley
agreed. That was in 1911, the year when '. . . the typographic
tide turns: I abandon my "amateur" standing and my life work as
a professional type designer really begins'.

To give effect to this new enterprise Goudy started the Village
Letter Foundry to cast and sell the Kennerley Old Style and his
Forum Title. Two sizes of each of the types were described and
displayed in the first number of Typographica, which Goudy
published in September 1911. In the second number, issued in
July in the following year, more sizes of Kennerley were shown,
as well as a new type, called Goudy Old Style, which was later to
be renamed Goudy Lanston. Four more numbers of Typograph¬
ica were issued at long intervals: no. 3 in 1916, with a supplement