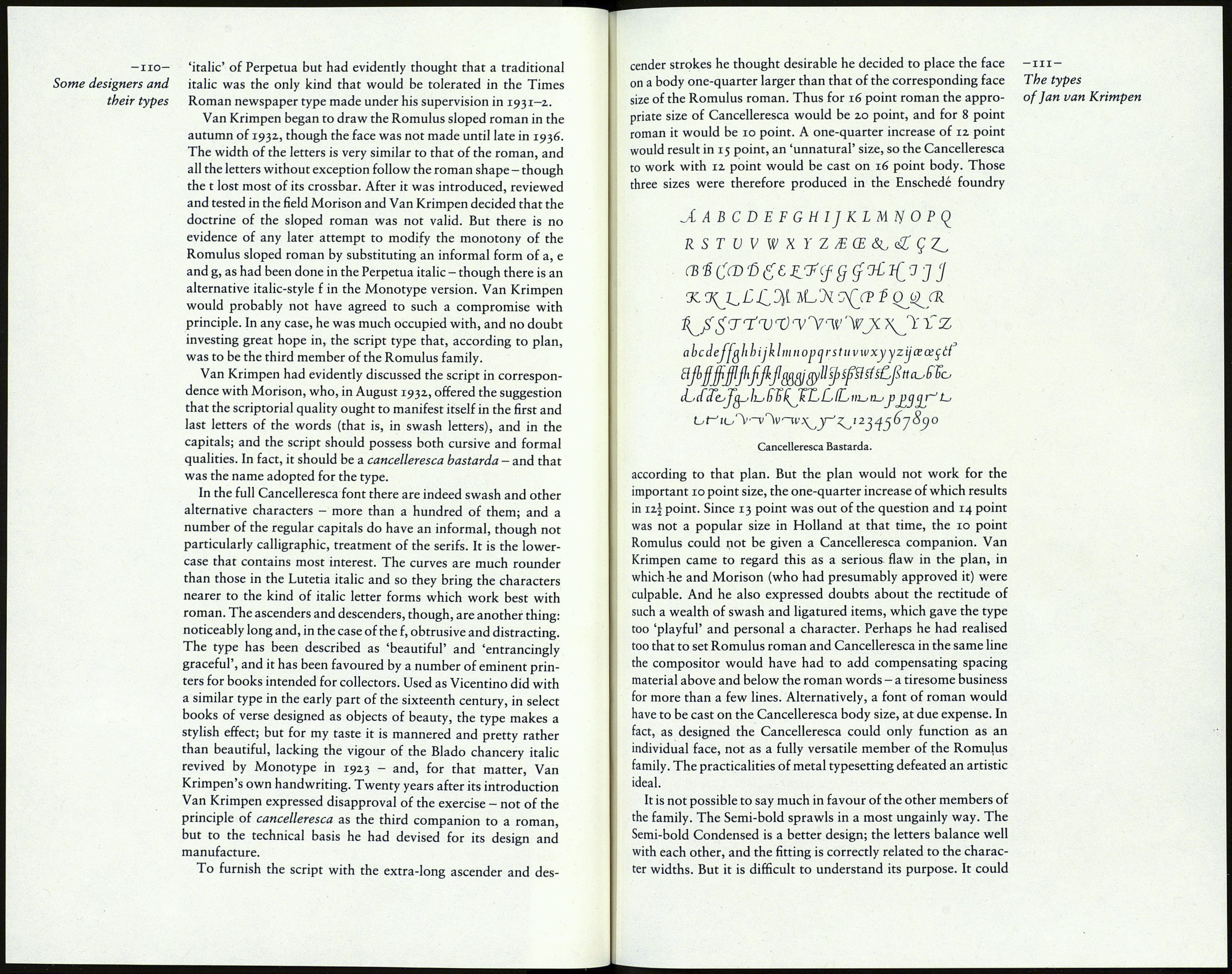 Some designers and QohM Maaazine. It was a short story, about

one volume in length, and was called 1 he
Struggles of Brown, }ones, and Robinson. In this I
attempted a style for which I certainly was
not qualified, and to which I never again
had recourse. It was meant tobe funny, was
full of slang, and was intended as a satire on
the ways of trade. Still I think that there is
some good fun in it, but I have heard no one
else express such an opinion.

Enschedé specimen book were by the same hand, discovered an
edition of Ovid, printed in 1671, in which the Enschedé italic
could be seen, with a roman which Van Krimpen judged to be a
true relation to it.

In spite of the lack of harmony between the Romanee roman
and the original Van Dijck italic four sizes of the roman were cut,
and it was the existence of these, and the fact that the Van Dijck
italic remained in only one size, that made Van Krimpen, twenty
years later, decide to create a new italic to work with his roman.
To keep these notes in historical sequence a comment on that
See page 117. italic is given at the end of this survey.

After the Romanee roman there was an interval until 1932, when
Van Krimpen conceived the idea of a family of types for book
printing, to comprise a roman, an italic, a script type, bold and
condensed romans, at least four weights of sans-serif, a Greek,
and possibly more - all to be related in style and consistent in
alignment. He was therefore intending to create a larger family of
types than had Lucian Bernhard, whose roman, italic and related
script had been remarked upon by Morison two years before, in
The Fleuron vii.

about one volume in length, and it was
called The Struggles of Brown, Jones, and
Robinson. In this I attempted a style for
which I certainly was not qualified, and to
which I never had again recourse. It was
meant to be funny, was full of slang, and
was intended as a satire on the ways of
trade. Still I think that there is some good
fun in it, but I have heard no one else ex¬
press such an opinion.

In his account of his designs Van Krimpen remarked that
Romulus, as the new roman was called, was related to Lutetia.
'The lowercase of Lutetia being on the whole on the narrow side,
it was to be expected that Romulus should be wider ... A num¬
ber of the capitals of Lutetia were, against the classical Roman
tradition, too wide . . . their width has been reduced . . .' As
letter shapes the alphabets of Romulus are exemplary. They are
most satisfying in the display sizes; less so in the text sizes, where
the limited contrast between the thick and thin strokes makes the
face look rather lifeless.

The 'italic' was a departure from historical practice. The doc¬
trine propounded by Stanley Morison in 1926 in The Fleuron v,
that the logical form for the auxiliary face to a roman was a
sloped roman, seemed at the time a revelation of truth, and it was
taken seriously. Van Krimpen accepted the theory, though he
was aware that Morison himself had not only been obliged to
allow the introduction of a few informal letter forms into the