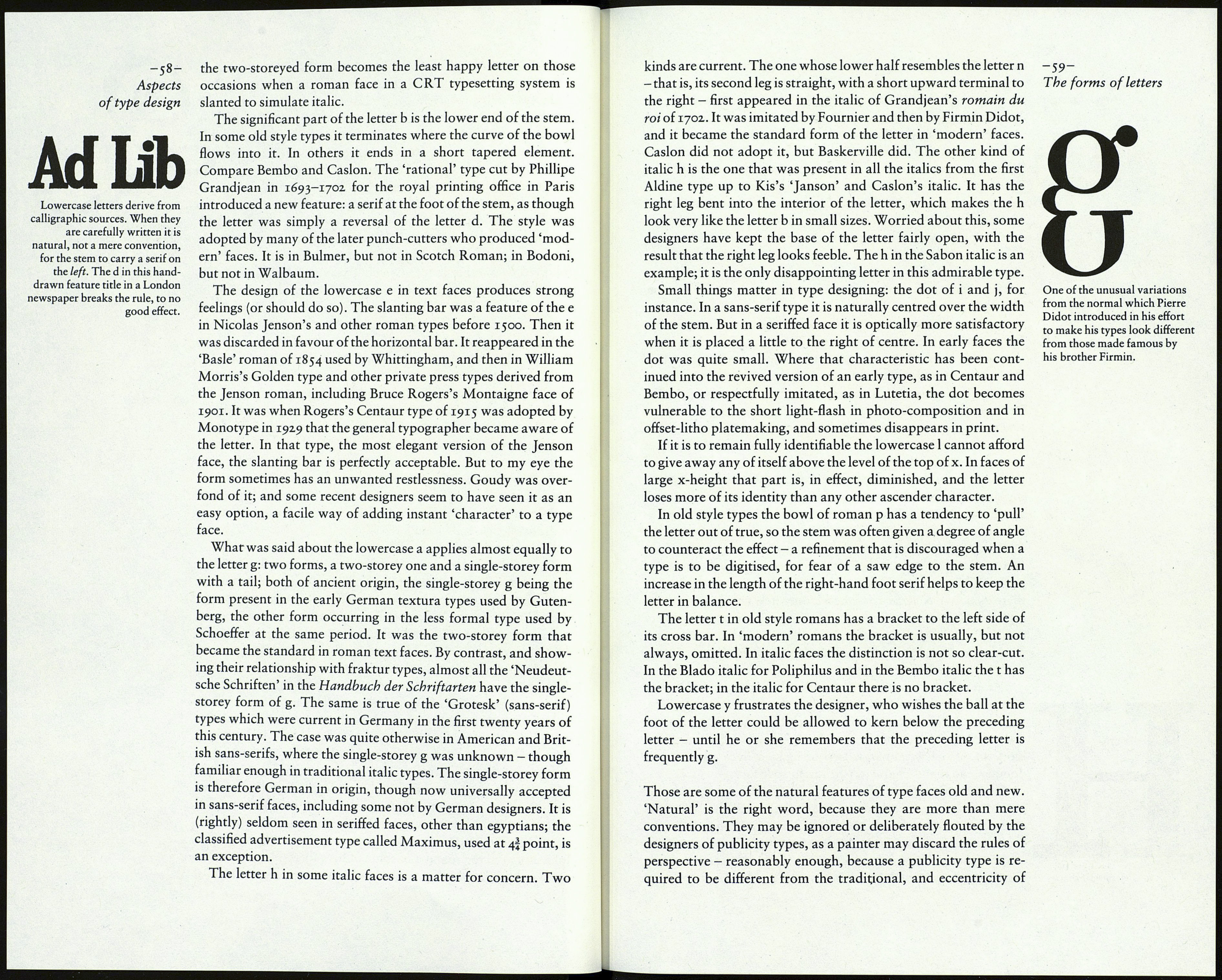 y: The forms of letters

It is a matter of constant interest that new text types continue to
be created and added to the substantial list of those in current use
- not to mention the many that have been relegated to history -
yet in all of them the characters conform to certain rules of shape
and structure which, it might be thought, would severely limit the
possibility of new invention and individuality.

The capital letters are the obvious ones to begin with, though
Herbert Bayer would not have done so in 1925 at the Bauhaus. He
wrote: 'Why should we write and print with two alphabets? We
do not speak with a capital A and a small a.' He was not the only
one to confuse the nature of speech with the representation of it.

The quality of a capital A can be affected in two ways: by the
spread of the limbs (if they sprawl the letter will look vulgar); and
by the height of the bar (too low, and the letter will look dull; too
high, and it may not print well in small sizes). So there is a
desirable, even obligatory, arrangement of the three strokes if the
letter is to be acceptable. Most of the other capitals have struc¬
tural rules that are just as fundamental to their aesthetic effect.

The letter В looks 'natural' when the upper bowl is a little
smaller than the lower one. Most designers agree about that; but
Rudolf Koch chose to make the two parts of the letter almost
equal in his Kabel, Koch-Antiqua and Marathon types and got
dangerously near to unattractive distortion of the letter.

In capital E it is the length of the three arms in relation to the
stem and to each other that gives the letter its character. The
lowest arm is usually longer than the upper one. It is noticeably so
in Baskerville; more so in Walbaum. The middle arm is generally
shorter than the others, but not always: see Emil Weiss's Roman
and Sem Hartz's Juliana. The position of the middle arm is usu¬
ally optically central in the height of the letter; but Van Krimpen
placed it well above the centre in his Lutetia roman.

In the letter К the leg is nearly always longer than the arm; and
straight, too - though it is curved in the Bell type.

The letter M is one of the key characters in the recognition of a
type. In old style faces up to the latter part of the seventeenth
century its legs were slightly splayed; see, for example, Bembo
and Garamond. Some of the Dutch punch-cutters then made the
letter stand to attention. Caslon, who followed Dutch models,
gave his M vertical legs; so did Baskerville and Firmin Didot.
That style of M contributed to the formality of the 'modern'
faces, though some designers of such types in this century,
Tiemann and Reiner, for instance, have preferred the splayed
style. The central part of the letter usually meets the baseline; but
it stays well above it in some display faces: Albertus, for example,

and, in different categories, the Memphis and Gill Sans faces.

In roman faces the tail of Q has often been used by designers to
add individuality to a type. Most of Goudy's are good; but the Q
in his Newstyle is eccentric. In the original Caslon italic the Q is
an exuberant single-stroke flourish, a calligraphic form quite dif¬
ferent from the roman. (It is also present in the italic of
Van Dijck.) Goudy often used a modified version of it.

The capital R is another key letter in the identifying of a type. It
is remarkable that so much individuality can be contrived from
just three elements: a vertical stem, a bowl, and a leg stroke. A
long leg makes the letter look elegant, which is good when the
letter is at the end of a word set in capitals but not when it is
followed by another letter - which is why the short-legged ver¬
sion in Bembo is usually the one chosen, regretfully, in place of
the original version. The leg is usually slightly concave in
faces based on the Jenson letter, like Centaur, straight in old
style faces, but arched with a looped terminal in moderns. In
Ruzicka's Fairfield type the R has a distinctive 'Queen Anne' leg.

Capital S is too often a dull letter, especially in French 'class¬
ique' types after Firmin Didot. To my eye the letter looks most
vital when the top and bottom halves are apparently equal and
there is a slight forward movement, as in Berthold Wolpe's
Pegasus type.

In most text types the W is visibly two Vs, either crossing each
other in the centre, as in Garamond, or overlapping, as in Caslon.
The simplified form of the W in Baskerville, in which the two
middle strokes join without a serif, is an aid to clarity, especially
in the lowercase and in small sizes.

Lowercase letters too have their rules of structure.

The letter a is interesting for existing in two forms. The fam¬
iliar one, used in all normal seriffed faces, has a closed bowl in the
lower half and an open loop above. The other sort has a single
closed bowl joined to the stem. Both kinds are of ancient origin
and were present in different varieties of black-letter in the early
days of printing. In the first decade of this century, when many
hybrid types, compounds of black-letter and roman, were pro¬
duced by the German type founders, most of them had the two-
storeyed a; but a third of the seventy or so faces listed as 'Neudeu¬
tsche Schriften' in the 1926 volume of the Handbuch der Schrift¬
arten have the single-storey sort, which had been the standard
form in the numerous fraktur types used in German printing in
the previous four centuries. The round a was therefore well
known to the German public, and presumably Paul Renner had
no difficulty in getting it accepted in the 'geometric' Futura sans-
serif he created in 1927.1 suspect Edward Johnston and Eric Gill
would have considered it as alien in a printing type, though
Johnston used the round a in some of his calligraphic work. No
one would welcome the round a in a seriffed type; but ironically